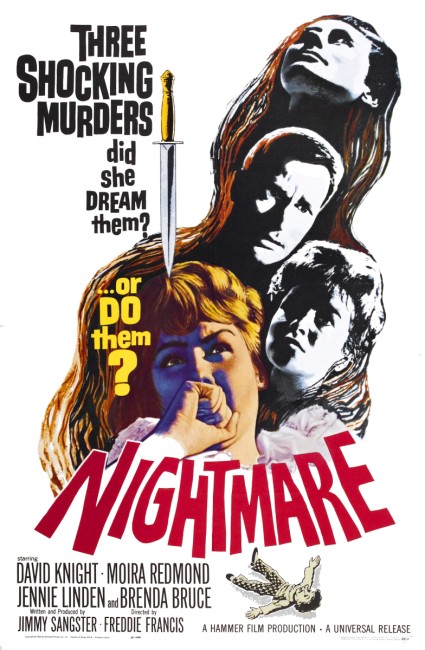 Janet Freeman is a pupil at Hatcher’s School for Young Ladies. She suffers from terrible nightmares and so the decision is made to send her home. Teacher Mary Lewis accompanies Janet back to the family estate of Hightowers. The maid explains to Mary that Janet is highly strung and may suffer psychological issues due to having witnessed her mother killing her father with a knife. As Janet settles back in to the house, she is subject to visions of murdered bodies and a ghostly woman.

Nightmare was the fourth in a series of psycho-thrillers made during the 1960s by Hammer Films who were best known at the time for their series of Frankenstein and Dracula films with Christopher Lee and Peter Cushing. The decade began with the huge success of Alfred Hitchcock’s Psycho (1960) and Hammer became one of a host of filmmakers in both the US and UK who rushed to compete with their own copies. In the field of the psycho-thriller, Hammer made the likes of A Taste of Fear/Scream of Fear (1961), Paranoiac (1962), Maniac (1963), Hysteria (1964), The Fanatic/Die, Die, My Darling (1965), The Nanny (1965), Crescendo (1970) and Fear in the Night (1972). Almost all of these were written by Jimmy Sangster and a reasonable number of them directed by Freddie Francis.

Freddie Francis came from a background as a cinematographer on films such as The Innocents (1961) and even won an Academy Award for Sons and Lovers (1960). I have watched most of the films he made as director and am certain that these Hammer psycho-thrillers, Paranoiac, Hysteria and this, plus the ones he made for other companies such as The Psychopath (1966), were the works where he was most at home. (See below for Freddie Francis’s other films as director).

Stylistically, Freddie Francis shows off and creates cinematographic set-ups that make you gasp – artful arrangements of furniture and decor that make striking contrasts between fore- and background; rooms lit in moody segregations of light and shadow; faces highlit in the centre of a frame. The contrast between foreground and background focus is particularly striking in scenes such as where Jennie Linden finds the stabbed body in the bed. This is something even further boosted by the 2016 dvd restoration (although this is made annoying by watching the film in an unusual 2.55:1 aspect ratio, which my played kept adjusting to 2.35:1).

On the other hand, this does have a side effect – after the middle of the film and the jump to the second storyline, the show becomes talky in the need to stop for exposition. As a result, watching mundane exchanges take place in widescreen tends to make them seem too prosaic and dull when the vastness of the frame itself seems to be demanding that more be happening visually.

One of the problems with the Hammer psycho-thrillers were always Jimmy Sangster’s scripts, which often hung around absurdly contrived if not outrigtly improbable twist revelations about what was happening. Unlike many of the other psycho-thrillers of the era, Sangster had no interest in twists based on contorted gender identity that Hitchcock gave us in Psycho. Rather he frequently turned to the earlier French classic Les Diaboliques (1955), which was based around a classic twist ending that revealed a hugely contrived set-up to gaslight the heroine.

Nightmare hangs on another of these Les Diaboliques twists. It is something that ends up sinking the film. [PLOT SPOILERS] The first half is a fairly standard story that has served the genre from The Cat and the Canary (1927) onwards where an heiress returns to her family home as a series of murders/supernatural happenings occur before these are revealed to have been set up with the intention of driving her crazy.

[PLOT SPOILERS CONTINUE] Jennie Linden is carted away to an asylum far too casually and we then settle in to what seems to be a second gaslighting plot. It almost feels as though Sangster felt that the first plot was hackneyed and decided “what if there was a second gaslight plot going on on top of that?” This unfortunately creates confusions. Firstly, Jennie Linden is built up as a sympathetic lead and it is a jolt to see her removed from action halfway in – Hitchcock did the same with Janet Leigh in Psycho but we don’t get the shock of seeing Jennie killed off here and her sudden removal leaves us wanting to know what was going on.

It feels confusing as our sympathies are then swung around to be placed onto Moira Redmond – especially when the first fact we learn about Moira in this storyline is that she was the one posing as the ghost Jennie saw in the house. It is extremely confusing when you are being required to sympathetically engage with somebody as they undergo a gaslight plot at the same time as you are perfectly aware that they were the ones responsible for the first gaslight plot. Things are finally adequately resolved at the end but the confusing switching of tracks and sympathies in mid-film causes this to sink too much for it to work.