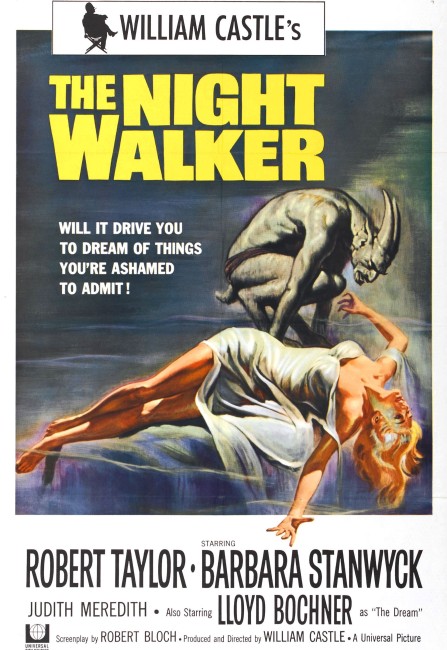 The blind and hideously ugly millionaire Howard Trent eavesdrops on his wife Irene as she goes through a nightly ritual in which she reaches out to an imaginary lover in her dreams. Trent accuses his lawyer of having an affair with her. Angry at Howard’s fanatical control of her, Irene decides to leave, only for Howard to suddenly be killed in an explosion in his laboratory. In the aftermath of the investigation, Irene goes to live at the beauty salon she owns. There she is startled when the handsome stranger from her dreams appears, come to romance her.

The Night Walker was one of the films of the infamous William Castle. During the 1950s, William Castle found fame with horror films such as Macabre (1958), House on Haunted Hill (1959), The Tingler (1959) and 13 Ghosts (1960) wherein he used sensationalistic gimmicks such as seats wired to give electric shocks, skeletons winched across the theatre and insurances policies against audiences dying of fright. Into the 1960s, Castle moved away from gimmick horror into psycho-thrillers, beginning with Homicidal (1961) and passing through the likes of Strait-Jacket (1964), I Saw What You Did (1965) and Let’s Kill Uncle (1966). The Night Walker was one of several of the psycho-thrillers that Castle made during this period. Here he works in collaboration with Robert Bloch, the original author of Psycho (1960).

Before dissolving into both a routine and badly contrived thriller, The Night Walker starts out well. In the first few minutes, William Castle crafts something genuinely otherworldly, something that almost makes the rest of the film worthwhile – the credits open across a painted montage of twisted dream shapes filled with bodies falling into swirling whirlpools. The first ten minutes of the film set a particularly weird stage that immediately catches one’s interest as blind, white-eyed, deformed Hayden Rorke listens in on the sleeping Barbara Stanwyck romancing her dream lover and then immediately goes to accuse lawyer Robert Taylor of having an affair with her, before he is killed in a laboratory explosion.

These sequences create an incredibly unsettling fantastic mood and a beguiling mystery. The subsequent dream sequences are also well-handled, despite the frequent heaviness of William Castle’s directorial hand – the sharp jolt as Hayden Rorke reappears in the first dream sequence, or the church sequence where Barbara Stanwyck is surrounded by mannequins with Rorke standing under a twisting candelabra. There is also an effective musical score throughout. However, all of this mood is wrecked by a mundane twist ending that is so unbelievably contrived that it ruins everything that has gone before.

William Castle’s other films of genre note as producer-director are:– as director of Crime Doctor’s Manhunt (1945), the sixth in a series of Columbia crime thrillers, of which Castle directed several, featuring a forensicologist against a split-personalitied killer; the psycho-thriller Macabre (1958); House on Haunted Hill (1959); the classic The Tingler (1959), probably Castle’s best film; the haunted house film 13 Ghosts (1960); the psycho-thriller Homicidal (1961); Mr. Sardonicus (1961) about a man with his face caught in a grotesque frozen smile; the juvenile comedy Zotz! (1962) about a magical coin; the remake of The Old Dark House (1963) for Hammer; the Grand Guignol psycho-thriller Strait-Jacket (1964) with Joan Crawford; the prank phonecall psycho-thriller I Saw What You Did (1965); the psycho-thriller Let’s Kill Uncle (1965); the ghost comedy The Spirit is Willing (1967); the reality-bending sf film Project X (1968); as producer of the classic occult film Rosemary’s Baby (1968); as producer of the anthology series Ghost Story (1972-3); Shanks (1974) with Marcel Marceau as a puppeteer who can resurrect the dead; and as producer of the firestarting insect film Bug! (1975).