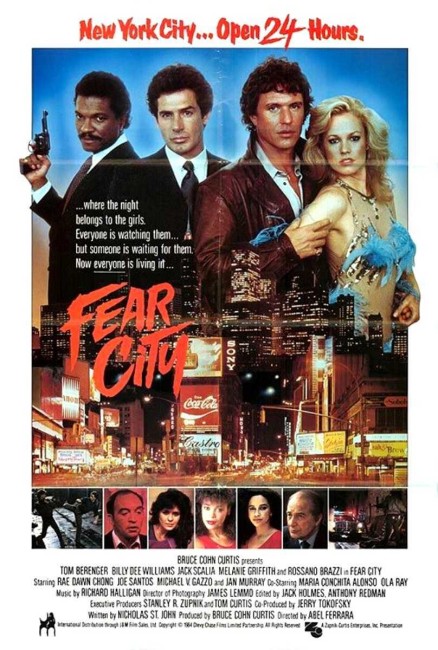 Former boxing champ Matt Rossi and his partner Nick run the Starlite Talent Agency in New York City, a Mob-backed company that provides girls for the strip joints. A killer that is nicknamed The New York Knifer by the press begins slashing, brutalising and then killing the Starlite girls. As they try to stop the killer, Matt and Nick must deal with intimidation from police detective Wheeler. Matt also uses the opportunity to reunite with the girl he still loves, the star stripper Loretta. Meanwhile, the spate of killings starts to affect business, as none of the strippers will come to work anymore.

Abel Ferrara is a director who has gained a strong reputation for his fierce and uncompromising work. Ferrara first appeared in the late 1970s with the psycho film The Driller Killer (1979) and the rape-revenge film Ms. 45/Angel of Vengeance (1980). Ferrara found critical acclaim in the 1990s with searing works about the underbelly of New York City in The King of New York (1990) and Bad Lieutenant (1992) and has maintained an unevenly fascinating body of work since with the likes of Body Snatchers (1993), Dangerous Game (1993), The Addiction (1995), The Funeral (1996), Welcome to New York (2014) and Pasolini (2014), among others. (See bottom of page for a list of Abel Ferrara’s other genre works).

Fear City was Ferrara’s third feature film, the first of his made with a decent budget, name actors and studio resources. His previous two films, The Driller Killer and Ms. 45, were made with a low-budget outlaw wildness that certainly gained him attention. The disappointment is that that is something that promptly vanished once Ferrara started to become beholden to the money people. The letdown for anybody back in the 1980s was that Ferrara made such an astonishing debut but then spent the next few years churning out forgettable films that mostly ended up going directly to video – including the likes of Fear City, China Girl (1987) and Cat Chaser (1989), while he even signed on to work on tv shows of the era such as Miami Vice (1984-90) and Crime Story (1986-8). It was not until the substantial critical successes of The King of New York and Bad Lieutenant that Ferrara found a way to meld his distinctive voice and searing take on the world with the more commercial dictates of bigger budgets and name stars.

Fear City is set in the world of New York strip parlours, a premise that you feel is tailor-made for another of Ferrara’s dark and sordid ventures into the human underbelly. Ferrara gets his female cast substantially naked at all opportunities – including not quite famous back then names like Melanie Griffith who has some sizzling numbers and Rae Dawn Chong (as well as an unknown Maria Conchita Alonso who remains clothed).

And yet for all that, Fear City feels like a film made by someone who has never been behind the scenes at a strip club in their life. The world just seems too clean and not sleazy enough. When you first meet Tom Berenger and his partner Jack Scalia, your first impression is that they are cops, not the owners of a stripper agency that works as a front for the mob. (You kind of wonder if the lead characters were pimps, would the film still have been cast with two handsome and heroic leads as it is here?) Berenger spends his time pining after Melanie Griffith; what you don’t see is any of the world where the women are exploited and treated as meat or where giving sexual favours to the owners who like to come across as big players is considered part of the game.

The film does occasionally venture into some of the underworld, with Rosanno Brazzi in particular giving a fine performance as a Mafia don, but it feels more like someone’s idea of what the world should be than a vision crafted by somebody who has spent any time moving among the characters.

The other disappointment is that the killer is never given any motivation or explanation as to why he is targeting the Starlite girls, as opposed to other strippers in the city. (One of the biggest oddities of the film is that the killer is never named, nor even the actor playing him). The film also features the typical Catholic themes that run through a great many Ferrara films wherein Tom Berenger goes to confession before setting out on his personal vengeance trail to track the killer.

Today Fear City looks tame. Nevertheless, it was the centre of some controversy when it first came out. The MPAA demanded the cutting of some of the stripper scenes, some of the violence and, most notably, the suggestion of a lesbian relationship between Melanie Griffith and Rae Dawn Chong. This controversy causes the film to be dumped by 20th Century Fox, who had originally backed it, and sold off to an independent distributor where it did little business in release.

Abel Ferrara has directed a number of other films of genre note:– the notorious The Driller Killer (1979), which was banned as a video nasty in several countries; the rape-revenge drama Ms 45/Angel of Vengeance (1981); the worthwhile and underrated remake of Body Snatchers (1993); the vampire film The Addiction (1995); the William Gibson adaptation New Rose Hotel (1998); and the End of the World film 4:44 Last Day on Earth (2011).