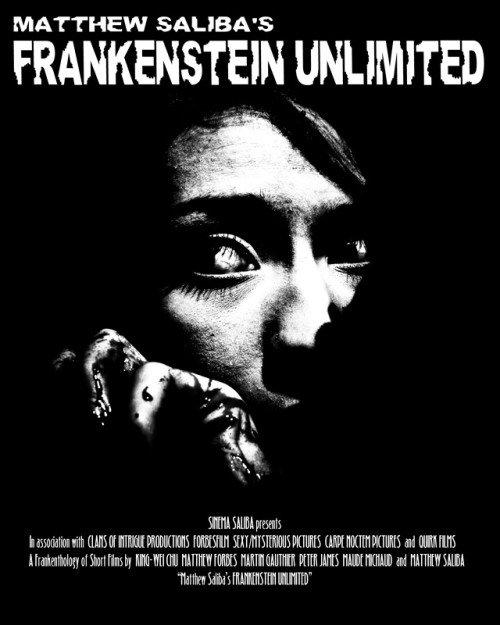 Dark Lotus:- Dr Orlof removes a foetus from a woman’s womb and plants it in a bath of soil. A mob then bursts into Orlof’s laboratory and attacks him. Several years later, a woman acts as the submissive sexual plaything of the man who led the group. However, she is the creature that was grown from the foetus and this is part of a revenge scheme concocted by her lover – Dr Orlof. Victor:- In the aftermath of his experiments, Victor finds himself shunned everywhere he turns in the streets. Flesh for Kung Fu:- In Hong Kong, someone has been eliminating all the kung fu masters. One of the last remaining masters faces his challenger who has been constructed from various body parts. Reflection:- Anna is badly facially disfigured and has gone away to the only place she feels welcome – the circus. However, after she saves up money to get plastic surgery, her attitude towards her friends changes. Occam’s Razor:- Frankie and Mary are interviewed by police over their involvement in a series of murders. The detectives try to get to the truth but are confused when both claim to be the guilty party. Mr. Fluffenstein:- Upset at the death of her cat Mr Fluffy, young Alice gets to work with her tools and resurrects Mr Fluffy as a cyborg. However, the resurrected Mr Fluffy soon goes out of control and attacks the rest of the neighbourhood.

Frankenstein Unlimited is an anthology film project from Montreal-based filmmaker Matthew Saliba. Saliba announces himself as an actor, playwright, stand-up comedian and fetish model, not to mention “a shameless self-promoter”. Saliba had made four short films before this, The Manipulator and the Subservient (2003), Pandora’s Paradox (2004), She Was Asking For It (2007) and Vampyros Lesbos (2008) and subsequent to this Amy’s in the Attic (2011), Our Footloose Remake (2011) and Eroticide (2013). These circle around Saliba’s interest in surrealism and S&M fetishism and have attained reasonable acclaim. His works also invoke much in the way of horror imagery with She Was Asking For It acknowledged as being influenced by Italian giallo cinema and Vampyros Lesbos taking its title from the Jess Franco film Vampyros Lesbos (1970). (In another homage to Jess Franco, the Frankenstein equivalent in Dark Lotus, Matthew Saliba’s segment here, is named Dr Orlof after the mad scientist in Franco’s The Awful Dr Orloff (1962) and sequels).

With Frankenstein Unlimited, Matthew Saliba has issued several other Montreal-based filmmakers the challenge of each making a short film set around the Frankenstein theme. This has resulted in a fascinating series of interpretations that tangent off various aspects of the tale. The range of stories we get offer a considerable variety of interpretations – everything from a kung fu film to a hard-boiled police interrogation thriller to a surreal dance piece and arty S&M erotica.

Matthew Saliba’s entry, the first short Dark Lotus, captivates one’s attention from the outset. For one, Saliba shoots the entire piece in a montage of progressive narrative black-and-white stills rather than moving film, a la the method pioneered by Chris Marker in La Jetee (1962). There is no dialogue, only the use of moody tracks from bands like Smashing Pumpkins, The Birthday Massacre, Garbage, Leonard Cohen and The Alan Parsons Project. This has a striking visual effect – as though we are watching the film take place in a series of vibrant staccato moments that freeze and amplify the emotion of each situation. The episode is none the more striking for the vivid scenes that Matthew Saliba throws at us – like the credits opening on a series of shots of a foetus inside a womb before a pair of hands appear and the foetus is drawn out by John M. Thomas and the camera pulls back to show a woman with a bloodied torn-open womb lying dead. The centrepiece of the film is a sequence with a naked Kayden Rose crawling across the floor to lick the boots of PVC-clad Martin Plouffe, before a nasty revenge is sprung on him.

After Matthew Saliba’s visually arresting Dark Lotus, Matthew Forbes’s Victor goes in the other direction and is quiet almost to the point of total understatement. The episode never tells us what is happening, only alludes to things as we follow John M. Thomas (also the Frankenstein equivalent in Dark Lotus) through the streets and to a cafe where he is shunned and abhorred by all he encounters. The piece never tells us what he has done, only lets us guess that he is a modern Dr Frankenstein and people are reacting after hearing about his experiments. We get some brief shots of what we presume to be the Frankenstein monster running through the snow. The piece feels minimalist often to the point of inaction – indeed, were the piece not included in a compilation of Frankenstein shorts, one would have no clue what it is about.

All of the segments in Frankenstein Unlimited take radical interpretations of the Frankenstein story – sometimes to the point where the connection with the original Mary Shelley book or any of the Frankenstein films is slim at best. Flesh for Kung Fu is one such example. Hailing in at just short of five minutes, the segment has a kung fu master receiving a challenge and then meeting his opponent in a martial arts duel on a rooftop. The film is not much more than a single martial arts sequence – although this is certainly competently arranged and well played by veteran Hong Kong actor Gordon Liu. The segment’s sole connection to Frankenstein themes is the revelation that the challenger is some type of artificial monster – exactly what is vague but we do see him with a big scar around his neck.

Maude Michaud’s Reflection has even less connection to the Frankenstein story – its’ sole link is that it is the story of a girl born with a facial deformity. What does strike about the segment is the dance sequences that Michaud stages – one that goes on several minutes with a female dancer balancing around several precarious combinations of wooden chairs. The big set-piece that Michaud builds to is something that resembles a dance sequence as choreographed by Clive Barker with bound and bleeding performers slithering up to Kayle St. Cartier where she is held in a chair to express their abandonment. On the level of its narrative rather than its visuals, Reflection is simplistic – it is only a variation on the cliche plot arc of someone changing their appearance/image and abandoning their friends as they are accepted by the rest of the world.

Occam’s Razor is told as a hard-edged police procedural and shot in beautifully crisp black-and-white. The dvd’s promotion alikens the sequence to The Usual Suspects (1995) and you can see where the analogy comes in with the story’s shifting between different unreliable interpretations of what happened. The actors all do well, especially the two interrogatees, James Harrington and Christina Sciortino, who play with a dangerous and sophisticated cool. Of all the segments, this pays the most respect to the original Frankenstein tales with detectives named Karloff and Whale – after James Whale who directed the original Frankenstein (1931) – and the suspects named Frankie and Mary, as well as characters taken out of the original Mary Shelley novel such as Elizabeth Lavenza and Henry Clerval.

What should be noted about all of the segments is their taking of the Frankenstein theme seriously rather than most modern Frankenstein films, which tend to parody it. The difference may be that most of the episodes feel like they are made by art school students as opposed to horror movie fans, who would no doubt have stacked the pieces with numerous gags and in-references. The one exception might be the final episode Mr. Fluffenstein about a killer cyborg cat. There are some cute scenes with the young girl (Jasper Round) nonchalantly building the cat, although a scene where the neighbours talk about fishing while Brad Carmichael tries to light a cigarette lighter to deal with the cat goes on far too long. It is a little too brief to fully hit its stride but the episode does hit an appealingly silly note.