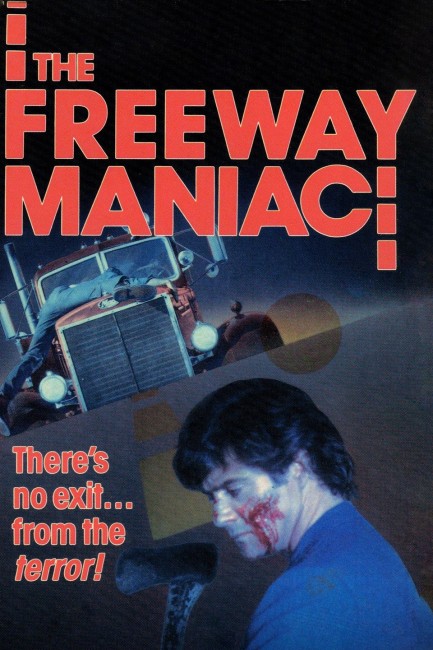 After walking in on his mother and her lover and stabbing the both of them, young Arthur is locked in an asylum. In the present day, Arthur is now a grown man. He breaks out of the asylum, killing several warders. Meanwhile, aspiring actress Linda Kenny comes home to find her boyfriend Mannie with another woman. She walks out on him but her car breaks down along the desert highway. Fleeing attempted rape by a gas station attendant, she is then attacked and pursued by Arthur. However, she runs him down in a car and he is taken back to the asylum. Some weeks later, Linda auditions for a part in a low-budget science-fiction film. The producer recognises her from news reports and decides to cast her for notoriety value. When he learns that the film will be shooting in a remote desert location, Arthur breaks out of the asylum again and comes to the film set, lurking in wait and killing all in his way to get to Linda.

The Freeway Maniac was the first film from director Paul Winters. Winters has worked sporadically in the industry since then and has made three other films with the non-genre likes of The Homecoming of Jimmy Whitecloud (2001) and the Civil War film Nate and the Colonel (2003), before returning to the horror genre with Cowboy Zombies (2011). Winters also co-produces The Freeway Maniac with his wife (?) Loren who plays the harassed leading lady. The most interesting name is that of co-scripter Gahan Wilson, famous for his cartoons in Playboy and National Lampoon. Winters and Wilson also collaborated on the script for Cowboy Zombies, while Winters has also produced Wilson’s various short film and tv pilot ventures.

The Freeway Maniac is not a particularly well polished film. It sits slightly above the cheap and amateurish and in its best moments – during the second half – approaches the serviceable. Winters has nasty fun with the various killing set-pieces – a couple stop to offer James Courtney a lift while he is walking along the road but then speed off so he tracks them to where they are parked making out and sets their car alight; he strangles a guy at a campsite and then throws the tent pole to impale the guy’s girl as she flees; knocks one guy off his motorbike and then takes the bike to run the guy over and backs up to finish the job; and later runs about wielding a chainsaw and a hammer. Winters even diverts off into imitating Duel (1971) in several scenes where James Courtney steals a truck and pursues a vehicle of teens – indeed, he takes things further than Steven Spielberg did and has one of the teens clinging onto the hood of the truck and being dragged underneath while it is racing along the highway.

James (Jude) Courtney, who 29 years later went on to play Michael Myers in the rebooted Halloween (2018), is not a great actor but he carries his six foot plus frame with an impressive lethality and places everything into the act of attacking his victims. He has great presence. Paul Winters also seems determined to throw in a series of tough guy survival scenes with him out in the desert cooking snakes, trapping scorpions and eating ants.

One of the complaints about the film might be the title The Freeway Maniac is not that relevant – there are some scenes in the early sections set around the freeway, although the bulk of the film abandons this for the film set location in the desert. Somehow though The Desert Maniac doesn’t quite have the same ring as a title.