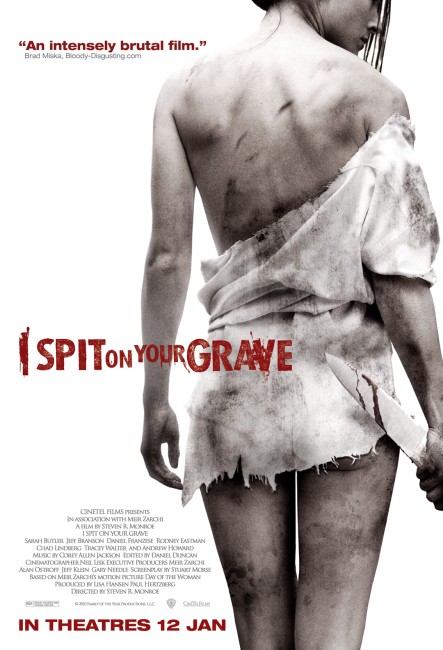 Novelist Jennifer Hills rents a house in a remote Louisiana backwater so she can spend two months working in seclusion on her latest book. She attracts the attention of a group of redneck locals when she stops at the gas station for directions and accidentally embarrasses the leader Johnny. After spying on her, the rednecks break into the house and begin tormenting and brutalising her. She flees from them and runs into the local Sheriff Storch. He calms her down and conducts an investigation but is unable to find anything. When he discovers empty wine bottles and joints, he turns things back on her, insisting she made it all up. He calls for backup to arrest her but this proves to be her assailants. Storch is in cahoots with them and they then take turns raping Jennifer. She staggers away and jumps off a bridge into the river. They search for her body but are unable find anything. A few weeks later, Jennifer reappears, hiding in the woods and begins to take a sadistic revenge against each of her tormentors.

I Spit on Your Grave (1978) was one of the most notorious of the shock and brutality films of the 1970s alongside works such as The Last House on the Left (1972) and The Texas Chain Saw Massacre (1974). These are films that went way out on an edge and determined to take audiences to an extreme, in effect give them wake up calls from their placid middle-class lives. I Spit on Your Grave attracted little attention when it was originally released in 1978 under the title Day of the Woman. It was then picked up by exploitation distributor Joseph Gross who gave it a wide re-release in 1980 with the new in-your-face name of I Spit on Your Grave. Under such title, the film gained huge notoriety, being slammed by critics like Roger Ebert and coming under attack by the feminist movement of the day who were just starting to jump on board the slasher film, claiming that it degraded women. I tend to regard the original I Spit on Your Grave otherwise – it is, for example, not ever a film that asks us to join in the degradation and rape of a woman, rather it fully depicts the shock and horror of what she is experiencing.

Though most of Steven R. Monroe’s other films have been cheap genre hackwork, he gives the appearance of having put some effort and professional polish into I Spit on Your Grave 2010. It was only the second of Monroe’s films to obtain a theatrical release. The great irony is that despite thirty years difference, the more conservative censorship standards of the 00s have made this version of I Spit on Your Grave a tamer film than the original. The rape scenes are much more curtailed, not the long, protracted 30 minutes or more that we had in the original. More bizarrely, the film barely gets Sarah Butler undressed. Most of the rape scenes take place with her nudity artfully hidden or just a bare butt showing and it is not until the rape scenes are over that we see a couple of brief shots of her frontally naked. Not that one is trying to argue in favour of excess nudity but in a film like I Spit on Your Grave, it represents a crucial tameness of spirit to show the central event so tastefully watered down.

In fact, in the remake there now seems more intensity put into the revenge scenes than there is any brutality of emotion conveyed during the initial rape scenes. Steven R. Monroe places far more emphasis on psychological torment than he ever does on the sexual assault. There are some nasty scenes with the rednecks forcing Sarah Butler to fellate the barrel of a gun and then a bottle of alcohol. The nature of Jennifer’s revenge has also changed. Now there is a great deal of mystery created during the middle of the film about what happened to her with she vanishing off stage and becoming an almost supernatural figure disappearing in and out of the woods as she returns to play a series of taunting games that turn the men against each other before she kills them.

The revenge scenes certainly propel I Spit on Your Grave 2010 well into Torture Porn territory a la the likes of Hostel (2005) and the Saw sequels. Daniel Franseze is tied up to a tree with fish hooks through his eyelids and fish gut splashed in his eyeballs for crows to peck his eyes out; Rodney Eastman is tied up hanging face down over a bath filled with acid where he is eventually unable to hold himself up and forced to let his face fall into the acid; Jeff Branson is tied up, his teeth pulled out with pliers and then his dick cut off with a pair of shears and shoved into his mouth; while Andrew Howard is tied up with a shotgun up his ass and a string tied to Chad Lindberg’s wrist that he is set to pull when he wakes up.

One of the more interesting new additions in the remake is the character of the sheriff played by Andrew Howard. His introduction comes rather well where Sarah Butler flees the initial assault, runs into him and he calms her down, insisting on taking her back to the house to check out what has happened. His initial sympathy then turns on her after he finds bottles of wine and a joint, including easily picking apart that it was something that she had smoked, and he goes to arrest her before his ‘back-up’ arrives and it turns out to be her tormentors again.

From this point, the film becomes dominated by Howard’s nasty performance. Moreover, he is given a character of decided ambiguities – such as being interrupting in the midst of raping and brutalising Sarah Butler by a cellphone call from his daughter wondering if he is going to come and make her Sunday breakfast. This is an especially good performance from Andrew Howard who is in actuality British yet does a highly convincing job of adopting a Louisiana backwoods accent for the role. During the initial scenes, lead tormentor Jeff Branson gives a macho and domineering performance that casts a dangerous shadow over the entire film.