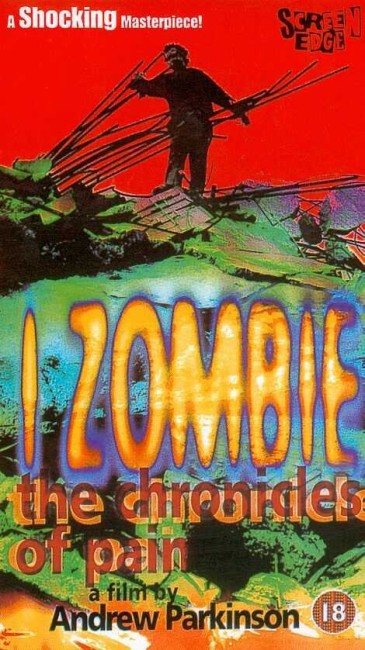 Mark and his girlfriend Sarah argue. She has an exhibition coming up on the weekend but he needs to go and collect samples for his research. Mark departs only to be attacked and bitten by a stranger in the woods. Afterwards, Mark develops a hunger for eating human flesh. He moves into a flat and goes out, attacking people every few days to feed his need. At the same time, his flesh begins to decay and he tries to keep his body parts from falling off. He is unable to bring himself to return to Sarah and in his absence she becomes involved with another guy.

The zombie film has undergone two distinct phases. First there was George Romero and Night of the Living Dead (1968), which he followed up with Dawn of the Dead (1978). The latter in particular produced a number of copies throughout the 1980s. The zombie film had largely faded away by the end of the 1980s, apart from occasional stragglers. There then came a major revival in the 2000s with films like Resident Evil (2002), 28 Days Later (2002), Dawn of the Dead (2004) and Shaun of the Dead (2004) and tv’s The Walking Dead (2010- ), which produced a great many imitators, parodies and gonzo title mash-ups. (For an overview of the genre see Zombie Films).

Sandwiched in between these two distinct phases are the works of British director Andrew Parkinson. Parkinson first appeared with I Zombie: The Chronicles of Pain here then made a follow-up on the same kitchen sink zombie theme with Dead Creatures (2001). He went onto make the sexual horror film Venus Drowning (2006) and a segment of the anthology Little Deaths (2011) but has subsequently disappeared as a directorial force.

I Zombie: The Chronicles of Pain is a film that gains a great deal of its effect from its very ordinariness. Like the scene where we see Giles Aspen making his first kill – biting the cheek out of a man where the surroundings are the flatly lit interior of a regular lounge with a sofa behind them, a banal floral print on the wall and the chatter of the tv in the background. This is literally a kitchen sink zombie film – we see Giles Aspen scrubbing the bath and obsessing about paying the rent and gas bill. We even hear his voiceover itemising a grocery shopping list. Furthermore, Parkinson was shooting before the advent of the digital camera and so there is much more of a rawness to the film in its shot-on-video look.

The horror of the show comes in watching Giles Aspen’s physical decay. Andrew Parkinson’s camera sits calmly observing as we watch Aspen having to use a power drill to attach a metal strut to hold his leg together or placing bandages across patches of his face as the skin starts to suppurate, The scenes towards the end depicting Aspen’s advanced state of decay are quite horrible to watch. Although quite the most pathetic scene in the whole film is when Aspen pulls his pants down to jerk off to a couple of (regular) photos of girlfriend Ellen Softley – only for his dick to come off in his hand.

The scenes with Giles Aspen are interspersed with cutbacks to girlfriend Ellen Softley as we see her coping in the aftermath of his disappearance and getting on with her life, eventually becoming involved with another guy (David Sapling). The parallel plot structure leaves you expecting that Aspen is going to return to her, possibly with tragic consequences, or else bump into her in the street or some such. The very kitchen sink ordinariness of the film is that they never do and the last we see is the bleak images of her depositing his clothes outside a thrift store and his body decaying on the bed in his anonymous flat.