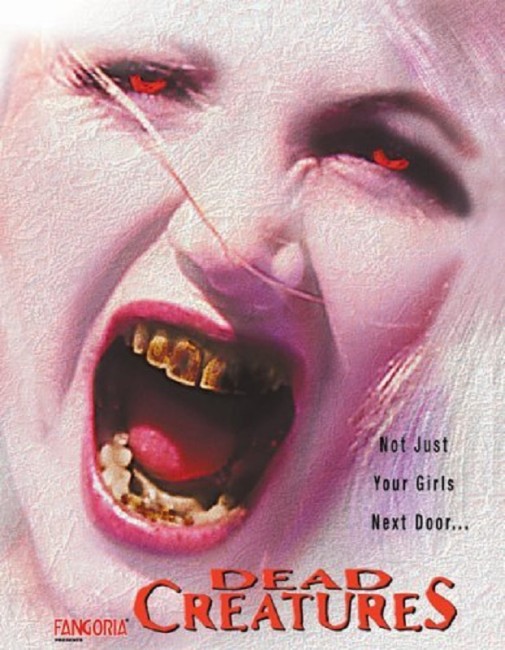 A group of girls are forced to keep moving from one rundown flat to the next as they tend their rapidly deteriorating friend Ali. Both they and Ali are infected with a zombie condition – they are trying to hold it back by eating human flesh frequently but Ali has reached the point of advanced putrefaction. They lure men in the street by posing as hookers, kill them and bring their bodies home to eat. At the same time, a man is also capturing and killing off the numerous zombies that he finds in the streets.

Dead Creatures is the second film from British director Andrew Parkinson. Parkinson’s first film was the well-received, no-budget effort I Zombie: The Chronicles of Pain (1998). Parkinson went onto make the sexual horror film Venus Drowning (2006) but subsequently disappeared as a directorial force.

Both of Parkinson’s zombie films of course something that invites natural comparison to George A. Romero and his trilogy of zombie films Night of the Living Dead (1968), Dawn of the Dead (1978) and Day of the Dead (1985). Of course, the comparison with Romero only serves to highlight exactly at what opposite ends of the zombie theme that both directors are operating. In Romero’s films, the dead are an apocalyptic threat that has brought the whole world crashing down; Andrew Parkinson’s zombies are ordinary and dull who, but for their putrefaction and taste for human flesh, slot into the everyday with indistinguishable normalcy. There is something alarming about the ordinariness of Dead Creatures‘ zombies – the girls’ problems of moving flats contrasted with them posing as hookers, knocking tricks over the head to get fresh meat and sitting around in the bathroom carving up bodies. (Like Romero, Parkinson holds nothing back when it comes to gore).

Dead Creatures tells a multi-stranded story following the various girls, the character of Reece abducting and killing zombies, and the lone male zombie Christian. It is not always clear what is going on – like what Reece is up to and why, or exactly the relationship between all the girls. And sometimes Parkinson’s approach is so low-key as to be infuriating. However, when he does succeed in uniting all the strands of the story together, the glimpse of a social future where people are inexplicably turning into zombies and being forced to hide together in small enclaves, fearing the encroach of physical decay, all the while holding it off by feasting on the freshly murdered dead, is startling in its originality.

This is without any doubt the freshest, most interesting voice on the topic of zombies during the period that Romero fell silent on the subject and the revival of the genre in the mid-2000s. One wishes somebody would give Andrew Parkinson a decent budget as he could probably do miracles with it.