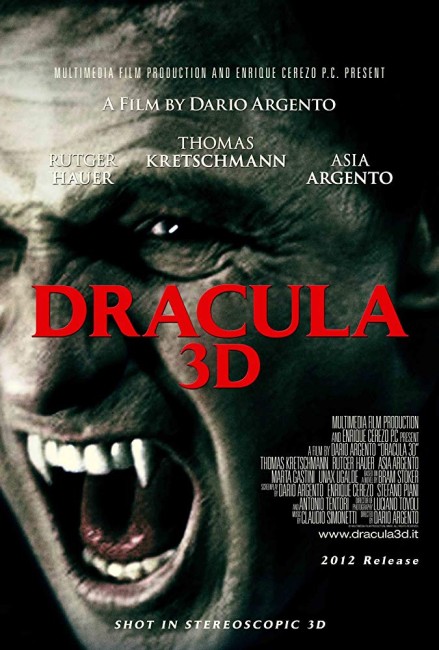 Jonathan Harker travels to the town of Hapsburg to take a job as librarian to Count Dracula. Dracula proves a welcoming host. His woman Tanja tries to attack Jonathan but Dracula stops her, only to then drink Jonathan’s blood himself. Not long after, Jonathan’s wife Mina arrives in Hapsburg to join her husband and goes to stay with her old friend Lucy Kisslinger. Dracula has been appearing to Lucy and drinking her blood. Soon after, Lucy falls ill and dies. Meanwhile, in searching for the whereabouts of Jonathan, Mina ventures up to the castle. There Dracula welcomes her and wants to make her his, certain that she is his long-dead wife come back to him.

Italy’s Dario Argento is a cult figure. Argento hit a peak in the 1970s and 80s with films like The Bird with the Crystal Plumage (1970), Deep Red (1976), Suspiria (1977), Inferno (1980) and Opera (1987). Since then alas, Argento has consistently let this fanbase down – indeed, next to George Lucas, he has become one of the genre’s biggest disappointments. He career since 1987 has been a two decade slide into mediocrity with the likes of The Stendhal Syndrome (1996), The Phantom of the Opera (1998), Sleepless (2001), The Card Player (2004), Mother of Tears: The Third Mother (2007), Giallo (2009) and Black Glasses (2022). (See below for a full list of Dario Argento’s films). Each of his releases over the last few years has been occasionally greeted with “Dario Argento regains his form”-type reviews but with Dracula it is surely time to stop hoping and give up on Argento altogether.

With Dracula, Dario Argento tackles maybe the most famous figure in all of horror cinema and conducts an adaptation of Bram Stoker’s Dracula (1897). Count Dracula has an extraordinary cinematic legacy, ranging all the way from the silent Gothic classic Nosferatu (1922) to Bela Lugosi’s indelible imprint in Dracula (1931) from which every caricature of the vampire as an Eastern-accented figure in a cape derives, to Christopher Lee’s fabulous incarnation in Hammer’s Dracula/The Horror of Dracula (1958) and sequels. (For a more detailed listing see Dracula Films).

Even despite the disappointment that has been Dario Argento’s last seven or so films, one remained hopeful of his interpretation of Dracula (although there was still memory of the misguided results in the back of one’s mind when he set his sights on interpreting another classic horror figure with The Phantom of the Opera). One hoped that if Argento had brought the baroque Gothicism of Suspiria and Inferno to play, along with the extravagant camera moves of his giallo films of the 1970s and 80s, we could have ended up with a wildly fantastique Dracula – probably something like Francis Ford Coppola’s Bram Stoker’s Dracula (1992). Instead, what we end up with is a tepid version that feels like the tv movie Dracula (1974) on a bigger budget.

Argento and his scriptwriters mess with the story to pointless ends. The most notable change is that the entire film takes place in Transylvania (although it is never actually specified as being Transylvania). Rather than Dracula travelling to England to plunder polite society there, he remains ensconced in his castle, venturing forth to plunder Mina, Lucy and others in the village below. One of the more interesting changes is that rather than the standard fear and superstition-ruled Transylvania, the locals accept Dracula as akin to a feudal master and ignore his taking victims as the price of his beneficence to them. The Seward Asylum gets a brief mention (it is now Van Helsing’s former place of employ), while Lucy’s other suitors (the Crew of Light) only get a single line joke thrown in their direction but are otherwise written out.

Argento and co feel as though they have borrowed aspects from other cinematic adaptations more so than the source. Jonathan Harker is no longer a lawyer come to transfer property deeds but a librarian come to itemise the library of Castle Dracula, an aspect taken from The Horror of Dracula. Thomas Krestchmann gets to utter Bela Lugosi’s immortal line “children of the night – what music they make.” Dracula fixates on Mina as being the reincarnation of his late wife, a central element to Bram Stoker’s Dracula. Dracula is outfitted in a black mandarin coat just like Count Orlock in Nosferatu; while the runnings around between Castle Dracula and the village below remind of one of the Hammer Dracula sequels such as Dracula – Prince of Darkness (1966), Dracula Has Risen from the Grave (1968) or Scars of Dracula (1971).

All of this achieves precisely nothing in terms of giving the story new angles. In fact, it is hard to describe what an utter disappointment Dario Argento’s Dracula is. When one considers the great entrances of the Draculas of the past – both Bela Lugosi and Christopher Lee making their descent down long staircases, Gary Oldman accompanied by a shadow that has a will of its own – – Thomas Kretschmann’s “Yes, I am” (in response to Unax Ugalde’s asking if he is Count Dracula), before roughly snatching his single vampire bride Miriam Giovanelli to his side, counts as feeble.

Thomas Kretschmann gives the impression he is trying to channel Liam Neeson. Unfortunately, he is too mellow a Dracula, merely a mannered aristocrat, and never seems to exude the sense of supernatural evil that a figure such as Dracula represents in the public imagination. (Kretschmann’s role as Dracula here makes interesting contrast to his being cast as Van Helsing less than twelve months later in the Dracula (2013-4) tv series).

Dario Argento is a director whose ventures into the fantastical – Suspiria and especially Inferno – turn the everyday into a deeply mysterious world brimming with the supernatural just beyond our rational ken. Considering the lineage of directors who have handled the Dracula story before him – the compulsive efforts of F.W. Murnau and Francis Ford Coppola, even the serviceable work of Tod Browning and John Badham – one would have thought a director like Dario Argento would have shot to the front of the line.

Instead, he has delivered a largely mundane treatment of the material that (visually) sits more down around the level of the Jack Palance tv movie. Even the CGI effects – notedly a shot where a wolf transforms back into Thomas Kretschmann – are sub-par and crappy. The credibility of the film evaporates altogether from about the point when we get Dracula transformed into a giant praying mantis, an effect that looks as ridiculous as it sounds.

Finally, about the 70 minute mark, Argento gives us a scene that sparkles with something of his old mojo. He takes delight in a series of extravagantly sadistic despatches in a scene where Thomas Kretschmann eliminates a group of villagers convened to deal with him, forcing the last one to turn his gun on himself and put it under his chin where we then see the bullet fire in slow-motion up through the man’s mouth and explode out the top of his head. Too little, too late, alas.