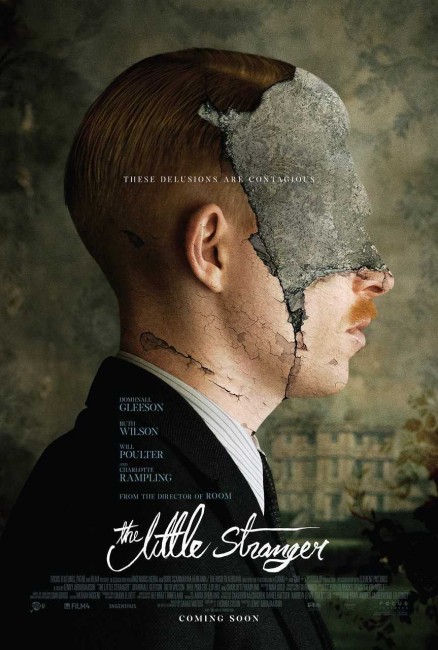 Warwickshire, the late 1940s. Faraday, a local GP, is called to tend the maid Betty at Hundreds Hall, the decaying estate of the Ayres family. He returns to tend the brother Roderick who was badly burned in combat during the War. He befriends and forms an attachment to the daughter Caroline and comes to care about the family’s plight in staying afloat financially in changing times. His friendship with Caroline becomes tentative romance, even as Roderick has to be committed after setting his room on fire. Even though Faraday ridicules the notion, the others believe that the house is haunted by the ghost of the late daughter Susan.

British author Sarah Waters is a specialist in her own seemingly self-created niche market of Victorian lesbian fiction. She first published Tipping the Velvet (1996), which grew out of the doctorate she was writing on Victorian LGBT fiction. She went on to publish Affinity (1999) and Fingersmith (2002), also lesbian romances set during the era, while the subsequent The Night Watch (2006) and The Paying Guests (2014) update her themes to eras of the 20th Century. Her works gained even more attention after the BBC mini-series adaptations of Tipping the Velvet (2002) and Fingersmith (2005) and to a lesser extent of Affinity (2008). Fingersmith also formed the basis of Park Chan-wook’s film The Handmaiden (2016).

The Little Stranger (2009) was a break for Waters away from what she was used to writing – it is, like her most recent books, set in the early half of the 20th Century and was her first book to feature a heterosexual relationship at the centre of it. It was shortlisted for the prestigious Man Booker Prize. On the other hand, much of the praise for the book feels like the self-importance of Serious Literary types, the sort that would consider it beneath them to read a populist writer like Stephen King and thus are oblivious to the tropes and feel of horror fiction. I suspect if Walters had published as a horror writer with no literary acclaim, her response might have been more tepid.

The film version of The Little Stranger comes from Lenny Abrahamson, an Irish director who made the likes of Adam & Paul (2004), Garage (2007) and What Richard Did (2012), before having a reasonable arthouse hit with Frank (2014), the eccentric tale of a band that is led by someone wearing a giant fake head. However, the film that gained Abrahamson a huge name was the Brie Larson-starring abduction and imprisonment film Room (2015), which was nominated for an Academy Award Best Picture and saw Abrahamson nominated for Best Director. Room was a film I’d have no trouble placing on my list of the Best Films of the 2010s. (The Handmaiden would probably go on the same list).

The ghost story has had a long tradition, although in the last few years I am starting to feel that the number of similarly produced and written films has reached a point of market glut. The Little Stranger is a refreshingly different work to all of these. First and foremost, it absorbs us in its story and setting – a specific period in the late 1940s when the National Health Service was being introduced in the UK and one can visibly see the once-great British aristocracy in decline. The film devotes much to delineating the characters involved. Indeed, we become absorbed in their dramas so much so that it is some 70 minutes before ghostly happenings start to happen.

That said, I don’t think Lenny Abrahamson does anything particularly interesting with these. The ghostly elements were far more ambiguous in the book where we could not be certain whether they were real, what the various characters were haunted by or whether things were just being imagined. The film removes much of the ambiguity, while the final shot leaves no doubt. The final shot is certainly an intriguing talking point – one not akin to the puzzling photograph right at the end of The Shining (1980) – and leaves you wondering what it means.

The unexceptional ghost story elements certainly do not mean that The Little Stranger is by any means uninteresting. The human drama holds one absorbed. As do the characters interactions. Ever since Luther (2010- ), Ruth Wilson has become one of my favourite British actresses and has turned up in almost everything I have been watching of recent. Here she is dressed dowdy for the most part, but makes an interesting and intelligent figure. Domhnall Gleeson is another actor whose star has been on the rise in the last few years. He has an odd role here – one where he is outfitted with mustache and his hair clipped to a military short-back-and-sides. With his unnaturally pale skin, it makes him look like a hairless rodent. In the midst of this, Gleeson plays with frequently bugged out expressions, a perfect politeness or a cross snappiness that makes for a not always sympathetic point-of-view character.