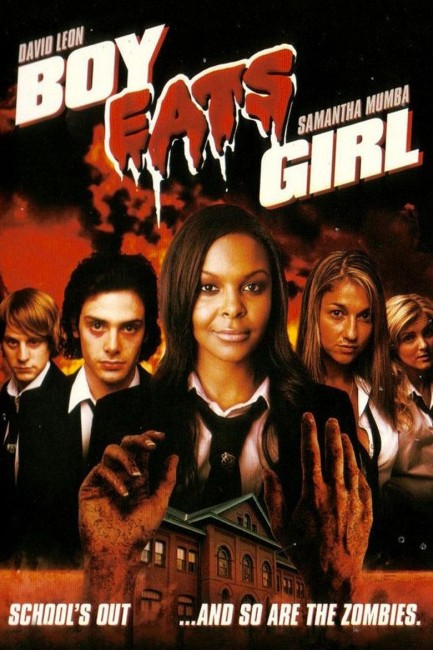 Nathan is a typical teenager with an unrequited crush on his classmate/best friend Jessica. Mistakenly thinking she is with another guy, he gets drunk and decides to hang himself just as his mother walks in. His mother works as a restorer in the local church and has discovered a crypt that contains an ancient tome with voodoo rites for the resurrection of the dead. She conducts a spell to resurrect Nathan. The next morning he gets up and goes to school as though nothing were wrong and with no memory of hanging himself. He however soon begins to find things have changed – he has no pulse, has unusual strength and a ravenous desire to eat flesh. After he bites into a classmate who was attacking him, this causes the classmate to become a zombie. From there, the zombie infection rapidly spreads around the town.

Boy Eats Girl was one among the vast number of zombie films that we have had in the late 2000s, following the successes of 28 Days Later (2002), the remake of Dawn of the Dead (2004) and the comic take Shaun of the Dead (2004). The majority of these copycats were cheaply made fannish efforts, while later entries in the field became much more wackily tongue-in-cheek or conducted bizarre crosshatches with other genres and/or unlikely elements.

Boys Eats Girl comes with one of the wittiest titles of any entry in the zombie revival fad. It immediately catches the attention and promises appealing things – sort of the suggestion of a high school love story gone really wrong. There have been several antecedents for this – most notably the not-particularly funny Disney comedy My Boyfriend’s Back (1993), while the modern zombie fad has offered variants such as Zombie Honeymoon (2004), Warm Bodies (2013), Burying the Ex (2014), Life After Beth (2014), plus the more serious Make-Out With Violence (2008) and the quite amazing Nina Forever (2015).

The surprise about sitting to watch Boy Eats Girl is that the most tongue-in-cheek (and indeed the best) thing about it is the title, the rest of the film plays itself seriously. While the title leads you to expect a wacky and/or comic take, everything else about Boy Eats Girl, as it transpires, is a surprisingly ordinary and unexceptional zombie film. Indeed, you feel like it is a film made by people who have not watched many other entries in the zombie genre. The plot plays out in a way that almost requires an audience to view it having never seen any other zombie films – if you are a seasoned veteran of the genre, everything falls into a predictable place without any notable variation. You reach the end realising it is a zombie film that offers nothing whatsoever in terms of original ideas, twists on the familiar, not even a good or intensive or gory telling of the usual elements. Nor, it should be added, does the set-up promised by the title ever transpire.

What also stands out is how much of a feelgood zombie film it is. All around the town, people are being infected and turned into standard flesh-devouring zombies almost instantly it would appear. Despite being the first to be infected however, David Leon takes the entire length of the film to start losing his human faculties and is still struggling with his urges right at the end when his friends who have been bitten moments before are turning ravenous. The final wrap-up of the film is an appalling case of Epic Pooh – a miraculous snakebite cure is able to reverse the effects of zombiedom allowing David Leon and his friends to be spared, while the bullies and bad guys are killed.

Among the cast, the only recognisable name is Irish-Zambian born Samantha Mumba, better known as a singer who made her acting debut with The Time Machine (2002). Subsequently, the name that came to the fore in films like About Time (2013), Ex Machina (2015) and the Harry Potter series was that of Domhnall Gleeson, the son of Brendan Gleeson, who has a small role as a nerdishly gawky student.