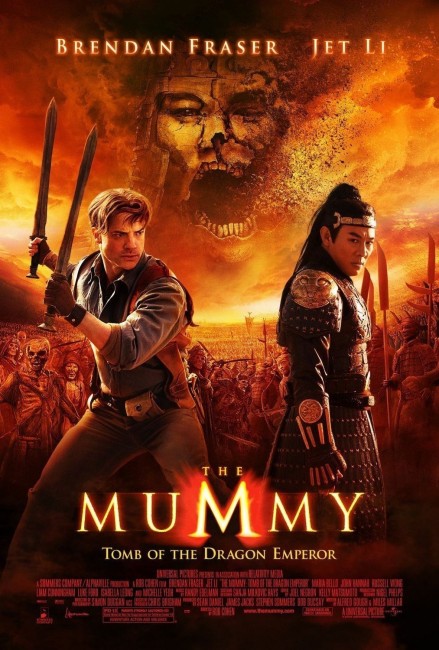 1946. Rick and Evelyn O’Connell’s son Alex is now an archaeologist and uncovers a tomb in China that contains the preserved body of the fearsome Emperor Han and his army of terracotta warriors. Rick and Evelyn have retired from archaeological adventuring and are living on her family estate in England where she has become a successful author writing fiction based on their mummy adventures. Rick feels bored being settled down and yearns for adventure. The British government then requests that they accompany the valuable Eye of Shangri-La back to China. When they arrive, The Eye is taken at gunpoint by Alex’s professor who is in cahoots with Chinese soldiers. They use the Eye’s powers to revive the emperor. In order to fully be restored to human form, the emperor needs to travel to Shangri-La and bathe in the Pool of Eternal Life whereupon he will gain the powers to change shape, control the elements and bring his army back to life. Rick, Evelyn and Alex, guided by a 2000-year-old immortal witch, race across China to prevent the emperor from finding the way to Shangri-La.

Tomb of the Dragon Emperor is the third of the Mummy movies that began with The Mummy (1999) and continued with The Mummy Returns (2001). Both films starred Brendan Fraser and Rachel Weisz and were directed by Stephen Sommers. The first of these was a thrown together as a mix of special effects spectacle, adventure and comedy. With The Mummy Returns, Stephen Sommers began to pile on increasingly larger displays of special effects spectacle at the expense of all else.

With Tomb of the Dragon Emperor, the Mummy series has been revived for a third entry. This time Stephen Sommers is absent, excepting as a producer – away directing G.I. Joe: The Rise of the Cobra (2009) – and has turned the directorial reins over to Rob Cohen. Rob Cohen came to fame with films like Dragon: The Bruce Lee Story (1993), Daylight (1996), The Skulls (2000) and gravitated towards special effects spectacle and/or mindless action with the likes of DragonHeart (1996), The Fast and the Furious (2001), the ghastly xXx (2002) and Stealth (2005), as well as Alex Cross (2012) and The Boy Next Door (2015). (Peculiarly, Tomb of the Dragon Emperor is the third ‘dragon’-titled film that Rob Cohen has made, following Dragon: The Bruce Lee Story and DragonHeart). Brendan Fraser is also back (looking more like a live-action cartoon figure than ever), along with John Hannah – both seemed to have signed on for the paycheques and neither seems to be making any effort. Rachel Weisz’s role has been recast with Maria Bello (who in her russet hair dye job one would swear looks like a younger version of Sigourney Weaver).

The first two Mummy movies covered most of the possibilities of Ancient Egyptian adventure and so Tomb of the Dragon Emperor takes us to China. This does give us somewhat of an historical anomaly in that the ancient Chinese never mummified their dead. The film figures that at least they made terracotta warriors (which are actually statues made out of ceramic clay, not mummified humans) and that is close enough to mummies for undiscerning audiences.

While on the matter of nitpicking, the film is rather ignorant when it comes to Chinese history. The film has the Great Wall of China constructed by one emperor 2000 years ago, when in fact the Great Wall was built between the 6th Century BC and 16th Century A.D. (a time span of one thousand years) by several entire lineages of emperors. There are no records of human remains ever being buried inside the Great Wall. The film, despite its given date of 1946-7, also has Tibet already under Chinese control, even though Tibet was not annexed by China until 1950.

Of course, a substantial part of the reason for the series’ move to China is that China has suddenly become cool on screen. 2008, which was also the year of the Beijing Olympics, saw screen outings to China in other Hollywood films like The Forbidden Kingdom (2008) and Kung Fu Panda (2008), most of which were able to shoot on the Chinese mainland and/or came with Chinese co-financing deals.

Tomb of the Dragon Emperor reminds somewhat of the same year’s Indiana Jones and the Kingdom of the Crystal Skull (2008). Both revive a popular adventure franchise – indeed the Indiana Jones films were without doubt a major influence on the Mummy films. In both of these, there are common plots about the hero having settled down/gotten old and yearning for the good old days and then being joined in a new adventure by his wife and now grown son. There are even times when Tomb of the Dragon Emperor seems to be directly quoting from/homaging the Indiana Jones films – notably the Shanghai nightclub sequence, which has a great many similarities to the opening sequence in Indiana Jones and the Temple of Doom (1984), and the subsequent flight into the mountains in a ramshackle airplane.

The film’s greatest uncredited borrowing is from Lost Horizon (1937) and the 1933 James Hilton novel, which created the image of Shangri-La, the lushly verdant valley paradise in the middle of the Himalayas that holds the secret of longevity. (Although where Lost Horizon had the secret of longevity being a tranquil life away from the troubles of civilization, Tomb of the Dragon Emperor has seekers able to become immortal after merely bathing in a pool).

The problem with Tomb of the Dragon Emperor, The Mummy Returns and most modern CGI spectacle films is that there is invariably some invisible tipping line where the constant piling on of spectacle and effect sequences goes from creating a sense of awe and excitement to just becoming eye candy that passes one by without the slightest affect at all. The Mummy series certainly reached that point by the time of The Mummy Returns, which became annoying in its constant efforts to keep dazzling us. Here Rob Cohen throws in some very frenetic and busy action sequences – races through the streets with zombified terracotta horses and carriages of fireworks, various fight sequences, shootouts and martial arts sequences, a massively scaled climactic confrontation of armies, tombs stacked to the gills with booby traps and so on.

Rob Cohen at least creates a film that seems more credibly grounded than Stephen Sommers – for one, there is a lot less of the constant playing to comic relief like the other Mummy films. On the other hand, you can never believe that any of the action is taking place in the real world or happening to real people. It is not too long before Tomb of the Dragon Emperor collapses into a series of absurd moments – like the scene where the plane lands on the plateau and comes to a halt balanced on its nose on the very edge of a cliff.

The tipping point where the remotest shred of credibility goes out the window altogether comes in the scenes where the party are beleaguered at a mountaintop temple and Abominable Snowmen suddenly turn up as the Seventh Cavalry. The absurdity of this is not exactly helped by the Abominable Snowmen looking for all the world like Sully out of Monsters, Inc. (2001); not to mention the later battlefield scenes with the Abominable Snowmen bounding between the armies to leap up into the air to tackle aircraft.

Sadly for all the effort and clearly budget that has been put into it (a $145 million budget, shot on location in China), Tomb of the Dragon Emperor passes the brain’s digestive system by without making the slightest impact. As you sit in your seat, there is almost zero connection with anything that happens in the film, either by the actors playing in it or the audience. It is a film that feels like it has no point other than to sit at the door and steal $10 from your hand and give you a bucket of content free mental popcorn in return.