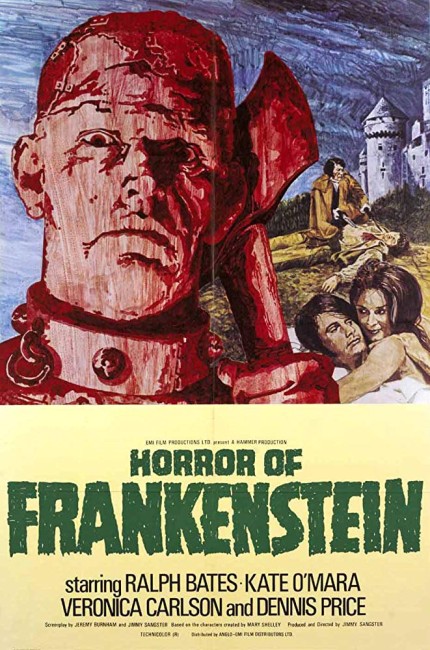 Victor Frankenstein, a cold, arrogant and womanising genius, is angry when his father forbids him to continue his anatomical experiments. He sabotages his father’s shotgun, causing him to be killed. Inheriting the family fortune, Victor uses this to enter med school in Vienna but is forced to return home when he gets the dean’s daughter pregnant. There he sets up laboratory, starting a series of experiments into the revivification of the dead. Eventually, he builds up a composite body from human parts, which he brings to life.

The Horror of Frankenstein was the fifth film in Hammer’s Frankenstein series. By 1970, Hammer had regurgitated most of their monster themes several times over. The Horror of Frankenstein came at the point Hammer were starting to inject new blood into their product. The influence of the younger generation was making itself felt and Hammer were casting younger stars, recruiting young directors, not to mention placing an open emphasis on sexuality in films.

With The Horror of Frankenstein, screenwriter Jimmy Sangster was brought back to rewrite his script for The Curse of Frankenstein (1957), which started the series and Hammer’s reputation as a horror industry leader off thirteen years before, while he was also allowed to make his debut as director. The role of Frankenstein was given a facelift and Peter Cushing was unceremoniously dumped from the role in favour of Ralph Bates whom Hammer were grooming as a new horror star at the time. Publicity stills were shot on the set with Ralph Bates and Peter Cushing shaking hands to announce the change. The future of the Frankenstein series seemed to be heading in a new direction … only The Horror of Frankenstein was a disaster and the Hammer Frankenstein series failed to go in any new directions.

The Horror of Frankenstein starts in with a promising sense of black humour. However, the opening tapers off and Jimmy Sangster thereafter seems uncertain whether he is delivering parody or straight melodrama. The effort turns out dismally where all that Sangster ends up doing is weakly echoing The Curse of Frankenstein in a plot that seems more interested in Frankenstein’s sexual dalliances than his medical obsessions. The sets seem flatly lit.

Dave Prowse, the bodybuilder who later played Darth Vader in Star Wars (1977) and sequels, turns the monster into a mindless brute. The best thing about the film is Ralph Bates’s cold and arrogant Frankenstein but the rest of the show is dreary and dull.