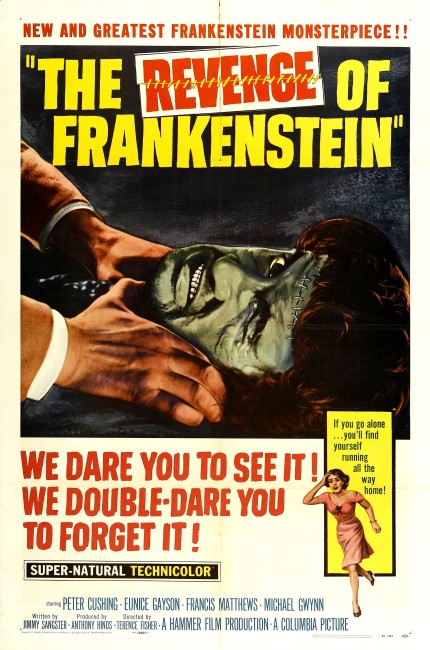 With the help of Karl, the crippled dwarf hangman, whom he promises a new body, Frankenstein escapes the gallows and they hang the officiating priest instead. Under the name Stein, Frankenstein sets up practice in the town of Karlsbruck, alternating between volunteer work at the poor hospital, which is a goldmine of parts to build up Karl’s new body, and private practice where his courtly charms draw him the devotion of the upper-classes. He is recognised by eager young Hans Kleve who forces Frankenstein to take him on as an assistant. Together they transplant Karl’s brain into the new patchwork body. The operation is successful but soon the body’s limbs return to their old crippled positions. Karl escapes and brings shame down on Frankenstein when he bursts in on a society function, crying “Frankenstein help me.”.

Hammer Films had huge success with their remake of the Frankenstein story, The Curse of Frankenstein (1957). The Curse of Frankenstein‘s revitalisation of the Frankenstein story, its plush sets and colour photography and its no-holds-barred shock value for the time made the Hammer horror legend, not to mention the careers of director Terence Fisher, screenwriter Jimmy Sangster and stars Peter Cushing and Christopher Lee. All four collaborated on Hammer’s Dracula/The Horror of Dracula (1958) the following year, which was an even bigger success that consolidated the Hammer name beyond a doubt.

The Curse of Frankenstein ended with Frankenstein about to be taken off to the gallows – the opening of The Revenge of Frankenstein segues in flawlessly by revealing that Frankenstein and the dwarf hangman conspired to hang the officiating priest instead. Eventually, Jimmy Sangster’s script reaches a positively ingenious twist ending, one that becomes a black joke in the face of the frequent public confusion of Frankenstein and his creation, with Sangster cleverly allowing the two to in effect become one and the same.

Hammer eventually made as many Frankenstein films as Universal did with their Frankenstein series in the 1930s and 40s. Whereas Universal’s series quickly ran to tired formulaic repetition with the monster being revived by some Frankenstein descendant and rampaging through the township before being destroyed in a laboratory explosion, Hammer maintained their Frankenstein series at a much higher degree of creativity. The most noticeable difference is that for Universal the lop-topped, bolt-necked monster became the continuing character, while here it is Peter Cushing’s Baron Frankenstein who is at the centre of the series with the monster remaining a supporting character with different faces and played by different actors.

The reasons become clear – for Universal the monster was the continuing character because the underlying anxiety for their series was the horror of science defying divine provenance, represented by the socially cataclysmic effects of the monster unleashed; whereas for Hammer, horror was the placidity of upper-class decency being disrupted by repressive forces from beneath such as Frankenstein’s ruthlessly amoral quest for knowledge or Dracula’s ravening animal lust.

Nowhere is the dichotomy that Frankenstein represents for Hammer more evident than here in The Revenge of Frankenstein. Whereas in Curse, Frankenstein represented a cold ruthlessness beneath the mask of upper-class decency and propriety, in The Revenge of Frankenstein the metaphor is expanded to take in the divide between upper and working classes. Frankenstein is wittily shown as a Janus-faced figure straddling both sides of the class divide with an equal measure of hypocrisy – on one hand courting the upper-classes with barely disguised contempt, while on the other pillaging the working classes for their limbs while professing the outward manifestations of charity.

The Hammer production crew are on top form with luxuriant photography, a rich and lavish score and exquisitely dressed sets. Terence Fisher is on excellent form too. Especially memorable is the scene where Karl bursts into the ballroom crying “Frankenstein, help me”, which Fisher directs and edits, bringing all the separate elements together with an explosive precision that is masterful.