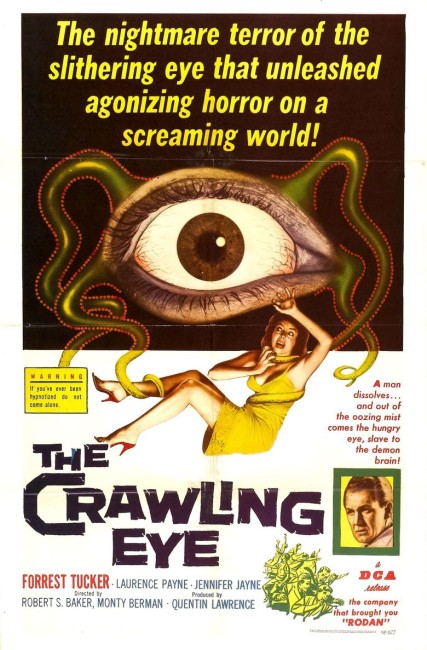 aka The Crawling Eye

In the Swiss mountain village of Trollenberg, climbers are mysteriously disappearing on the mountainside. A nearby observatory detects a cloud on the mountainside that gives off radioactive readings and never moves. Anne Pilgrim, one of two English sisters who form a psychic stage act, receives a premonition of great danger associated with the mountain. As the cloud starts to move down the mountain, killing people along the way, the astronomers realise that they are dealing with an alien invasion. The aliens have come from a dying world and selected the mountainside’s cold as the environment that most resembles their home planet.

The Trollenberg Terror was part of Britain’s small but nevertheless effective contribution to the 1950s alien invader genre. Perhaps reflecting Britain’s much more isolationist policy, or merely only the fact that British science-fiction was made on much tighter budgets, the British alien invasions films of the 1950s and 1960s – the most notable examples being The Quatermass Xperiment/The Creeping Unknown (1955) and Village of the Damned (1960) – were much more insidious, more psychologically orientated than their American peers. They contained threats that seemed to cut villages off from the rest of the world and seemed to come from within the ordered social fabric, as opposed to their American counterparts where the alien invasion was aimed at the whole of society.

The Trollenberg Terror, more well known under its crasser American retitling The Crawling Eye, was originally based on a tv serial The Trollenberg Terror (1956) that aired in six half-hour episodes. The film version was also directed by Quentin Lawrence and retains several members of the original cast. The film version was clearly hoping to copy the Quatermass films, which had been similarly adapted from tv serials into films with some success by Hammer Films. To this extent, the film even employs regular Hammer scriptwriter Jimmy Sangster.

The Trollenberg Terror is not an astoundingly great film – its story and the ground it covers is standard for the genre and all the rest, including the acting and effects is no more, no less than the average science-fiction film of the period. It is however well directed with Quentin Lawrence adding a tense psychological dimension that is enough to make it a good film. In scenes like the one where Janet Munro picks up visions of the men on the mountain during an ordinary parlour trick or where the undead Andrew Faulds returns and attacks Janet Munro with a knife, Quentin Lawrence makes striking contrasts between fore– and back-ground and light and shadow. Lawrence also adds horror effects that were daring for the time – of decapitated bodies and dismembered heads turning up in bloodied knapsacks.

However, when The Trollenberg Terror moves from the realm of psychological to outright horror – when it confronts its aliens – it becomes less effective. The image of a giant pulsating blob with a single eye sitting outside the hotel’s double-doors is compelling but the blob proves severely limited when required to do more than that. Forrest Tucker’s venture back down to the hotel to rescue the little girl is a decidedly unheroic affair thanks to an absurdly unconvincing fight with a set of telephone-cable thin tentacles.

The climactic fight with the aliens on the mountainside is badly let down by poor effects, especially the image of a bomber doing absurdly low strafing runs on the observatory, almost to the point of touching the roof. The locations are also betrayed by obvious cuts between second unit location pick-ups, back projection and painted cyclorama – the hut sitting on the mountainside looks more like something one would put on a Christmas cake.