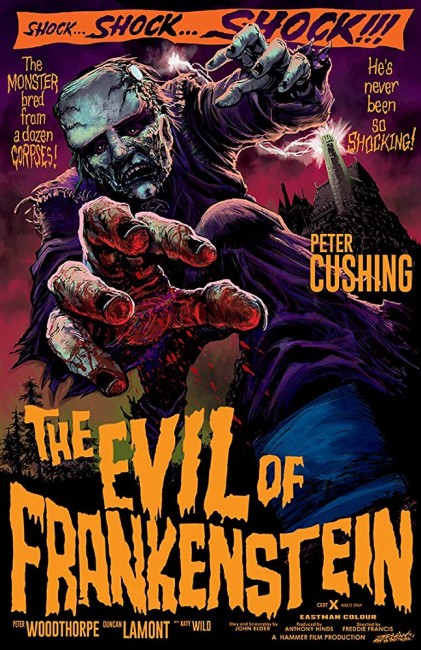 Forced to leave town because of their experiments, Frankenstein and Hans return to Frankenstein’s hometown Karlstad and set up laboratory in the abandoned Frankenstein chateau. Frankenstein then finds his original creation frozen inside a glacier and restores it to life. However, it will not respond to his commands. Frankenstein comes up with the idea of obtaining the services of Zoltan, a disreputable carnival hypnotist, to hypnotise the monster into obeying him. Zoltan is successful but has less than scientific interests at heart. With the monster responding only to his commands, Zoltan uses it to rob and take revenge upon the town authorities.

With the preceding two entries, The Curse of Frankenstein (1957) and The Revenge of Frankenstein (1958), Hammer had kept the same essential creative team – director Terence Fisher, screenwriter Jimmy Sangster and star Peter Cushing – in place. For The Evil of Frankenstein, Hammer producer Anthony Hinds replaced Sangster on script, while Freddie Francis inherited the director’s chair.

Freddie Francis was an up and coming director who had worked as an award-winning cinematographer in the previous decade, had made his genre debut with Vengeance/The Brain (1962), followed with a couple of Hammer’s psycho-thrillers, Paranoiac (1962) and Nightmare (1964), and then attained some success with the first of Hammer rival Amicus’s anthology films Dr Terror’s House of Horrors (1965) just subsequent to this. Francis, whose output to the Anglo-horror cycle has been underrated, would go on to become its next most prolific director to Fisher. (See below for Freddie Francis’s other films).

It is not clear why The Evil of Frankenstein is almost universally regarded as such a dog in the Hammer pantheon. Just look at the opening scenes that hit one with the fervid intensity of something out of a Hieronymous Bosch nightmare brought to life – a little girl sees a body being stolen from a hut in the forest in the middle of the night and calls a priest. The body is taken to Frankenstein who removes the heart before the paling body snatcher, dismissing his queasiness with a curt, “He won’t need it anymore,” before the priest bursts in, cursing Frankenstein’s abominable experiments as he smashes the lab equipment. It is a sequence lit with such a feverishly eerie intensity that it attains a nightmare atmosphere of dread chill. Nothing else in the film quite manages to match it.

Certainly, there are a number of images littered throughout that have a lingering memorability – the deaf-mute beggar girl and her strange relationship with the monster; the monster found buried in the side of the glacier; and an especially memorable scene where the monster gets up and begins to agonisingly shuffle around the lab while Frankenstein looks on, coldly clinically taking notes.

The Evil of Frankenstein presents some confusion to the continuity of the Hammer Frankenstein series. For some reason, Freddie Francis conducts a flashback that offers a potted retelling of the essentials of The Curse of Frankenstein anew. However, this makes changes to continuity – Frankenstein now appears to have merely been driven out of town, not executed. Where the events of The Revenge of Frankenstein fit in becomes somewhat confusing – the Hans character is carried over from Revenge, but Frankenstein’s new body and his escape from the gallows is forgotten about. It is a puzzle as to why the film creates the flashback – certainly, some of this is to set up plot points for later on – although without much rewriting this could all have been made to carry over from Revenge. What tended to lose many people was the addition of the Zoltan character, which takes the story considerably away from the Frankenstein mythos. Indeed, you could almost see this as Hammer’s attempt to craft their own variant on The Cabinet of Dr Caligari (1919).

With The Curse of Frankenstein, Hammer did not have the copyright to use the Jack Pierce designs for the Boris Karloff monster makeup from Frankenstein (1931) and so Phil Leakey came up with his own original designs. Apparently Universal has relaxed their copyright restrictions by the time of The Evil of Frankenstein and the makeup on Kiwi Kingston’s monster is closely modelled on the Pierce designs, the only time the Hammer Frankenstein’s came close to resembling the Universal originals.

Production designer Don Mingaye and special effects man Les Bowie collaborate to come up with not one but two of the series very best creation sequences, with lightning bolts and generator coils crashing in the best Kenneth Strickfaden tradition. On the whole, The Evil of Frankenstein is a Hammer Frankenstein entry that is well worth re-evaluation.