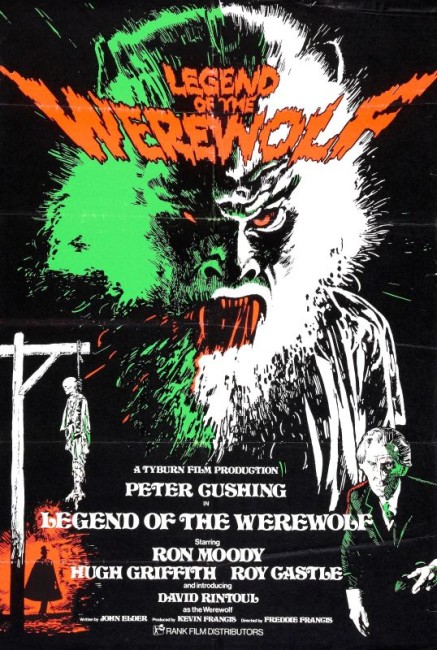 19th Century France. A refugee woman gives birth to a child in the forest on a full moon. She is attacked and killed by wolves but the wolves take and raise the child. Some years later, the child is found by the travelling circus of Maestro Pomponi. Pomponi takes the child in and exhibits him as Etoile the Wild Boy. Growing into manhood, Etoile learns civilised ways. However, under the light of the full moon, he transforms into a werewolf and kills. He leaves for Paris where he gets a job at the zoo because of his ability to communicate with animals. He falls for the lovely Christine who visits the zoo daily. But when Etoile discovers that Christine is a prostitute, the wolf in him emerges to attack the men who visit her.

Legend of the Werewolf was one of three films produced by England’s Tyburn Films, a company formed by director Freddie Francis’s son Kevin. Tyburn were clearly attempting to imitate the successes in the horror field achieved by Hammer Films. Alas, Tyburn never had much of a chance as the time they came along was also the time interest in the English horror film was starting to die off. They produced three films – Legend of the Werewolf, Persecution/The Terror of Sheba (1974) and The Ghoul (1975) – and then closed shop.

In both films, Hinds/Elder also ties the emergence of the werewolf to thwarted sexual desire – in Curse of the Werewolf, it is when the hero is forbidden to see the girl he loves and he goes to a brothel; here it is when he follows her to a brothel and discovers that she is a courtesan. Certainly, Legend of the Werewolf goes back closer to some parts of the Guy Endore novel The Werewolf of Paris (1933) that Hinds had substantially departed from when he adapted it as the basis of Curse of the Werewolf. Hinds has also combines the werewolf story with elements from Francois Truffaut’s The Wild Child (1969) about a true life feral child that was discovered in 19th Century France.

Unfortunately, Freddie Francis, one of the more underrated directors from the Anglo-horror school, is not on top form. Legend of the Werewolf is plodding on most regards. The werewolf makeup effects are not particularly scary. The attacks are inadequately conveyed through red filtered subjective camerawork and numerous closeups on the fangs. It is only Peter Cushing, who has a few comedic moments as a cheerful pathologist, who rises to the occasion. Tap-dancer and sometimes actor Roy Castle, who appeared in Freddie Francis’s Dr Terror’s House of Horrors (1965), has an amusing cameo as a photographer.