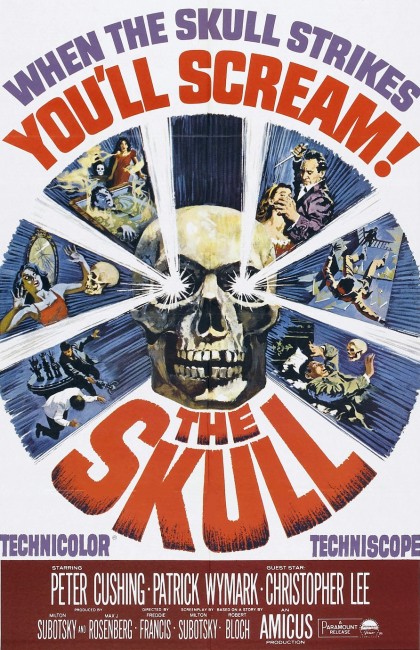 A disreputable fence offers Christopher Maitland, a professor of occult studies, a skull, which is reputedly that of the Marquis de Sade. A fellow collector who once owned the skull warns Maitland that de Sade was possessed by an evil spirit. The spirit still inhabits the skull and emerges on the two nights of the new moon, the traditional nights of witchcraft and Devil worship. As the new moon arrives, Maitland finds himself being possessed and driven to acts of murder by the skull.

The year prior to making The Skull, the English production company Amicus, headed by producers Milton Subotsky and Max J. Rosenberg, had made Dr Terror’s House of Horrors (1965). There they clearly set out to imitate the success being had by England’s Hammer Films around the same time. Dr Terror offered up a portmanteau of horror tales and proved a modest hit. The Skull was Amicus’s second horror film. Subotsky and Rosenberg reunited much of the same team behind Dr Terror – director Freddie Francis, musician Elizabeth Lutyens and art director Bill Constable, as well reemployed Peter Cushing and Christopher Lee, two mainstays of the Hammer success, who would both go on to apperar in a number of their films.

The Skull also saw Amicus in the first of several collaborations with horror writer Robert Bloch, who around that time had found some fame as a result of authoring the original novel that became the basis of Psycho (1960). With The Skull, Amicus only adapted one of Robert Bloch’s short stories, The Skull of the Marquis de Sade (1945), but in subsequent collaborations, beginning with The Psychopath (1966) and passing through The Deadly Bees (1967) and portmanteaus such as Torture Garden (1967), The House That Dripped Blood (1970) and Asylum (1972), Bloch would write screenplays direct for Amicus, often adapting a number of his own short stories.

The Skull is one Amicus film that has been well reviewed by everybody who has seen it. This makes my own disappointment a puzzle. The film has many similarities to the other Amicus-Francis-Bloch collaboration Torture Garden stamped all over it – Torture Garden included an episode where an obsessive collector resurrects a writer (Edgar Allan Poe instead of de Sade). Indeed, Robert Bloch’s original story has the pace that one feels more properly belongs at anthology length – The Skull would probably work perfectly at the 15-20 minute length of one of Amicus’s portmanteau episodes.

The very first scene tips off the story’s one and only surprise – that the skull is possessed – if the publicity campaign had not already. From there on, all that is left is Freddie Francis’s uncustomarily heavy-handed atmosphere, aided by an equally overblown score. That is if it is possible to find subtlety and suspense in the somewhat foolish notion of Peter Cushing being pursued by a floating skull, where the camera even gets to charge around peeping out of its eyesockets. The best sequence, where Peter Cushing is dragged before a judge by police and forced to play a game of Russian Roulette, is irritatingly unexplained – is it real or an hallucination or what?