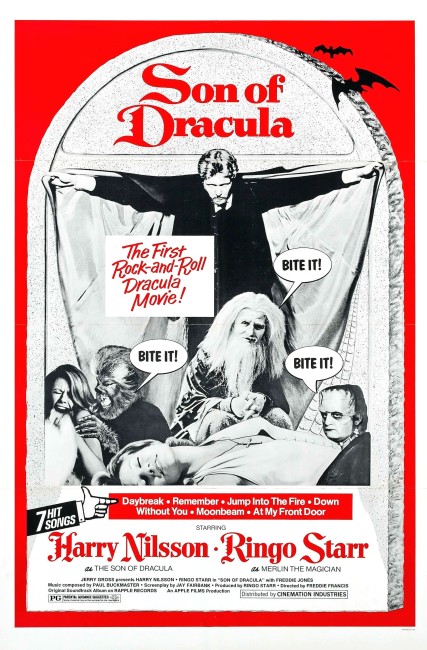 Count Downe, the son of Count Dracula and a human mortal woman, arrives in England. He has come for the astrologically ordained time that has been discerned by Merlin the Magician when he will be crowned the Overlord of the Underworld. However, Count Downe is not interested in being crowned but in making music. When he meets and is attracted to the human woman Amber, he decides that he wants to abdicate the crown and undergo an operation offered by Van Helsing to be made mortal. However, the scheming Baron Frankenstein is determined that this will not go ahead.

Freddie Francis was one of the great directors of the Anglo-horror cycle between the late 1950s and late 1970s. Although never gaining the cult following that fellow Hammer director Terence Fisher did, Francis’s output was just as prolific and contains a number of classics. (See below for Freddie Francis’s other films). Around the early 1970s, Francis engaged in a series of weird experiments, putting out efforts that tried to break the mould of his horror staple with the likes of Mumsy, Nanny, Sonny & Girly (1969), The Vampire Happening (1971) and Son of Dracula, all of which sit uncomfortably between horror, comedy and attempting to put one foot in the Swinging Sixties youth movement. I haven’t seen Freddie Francis entire oeuvre but I would have to say that Son of Dracula stands head and shoulders as his worst film – even surpassing the notorious Joan Crawford turkey Trog (1970).

Son of Dracula was an effort put together by former Beatle Ringo Starr who floated much of the money to make the film and took a producer role, as well as played the part of Merlin the Magician under a fake beard and pointy hat. Starr cast his good friend Harry Nilsson in the lead role. Nilsson was a popular musician/singer who gained much exposure after being praised by The Beatles and became good friends with them. Nilsson sings seven songs throughout the film, some of which feature appearances from Ringo Starr (a soundtrack was also released). The Starr-Nilsson collaboration had resulted in the earlier animated film The Point (1971). Nilsson never made any other acting appearances but did write the screenplay for the Whoopi Goldberg turkey The Telephone (1987).

Son of Dracula – no relation to Son of Dracula (1943) with Lon Chaney Jr, the third film in Universal’s Dracula series – is a complete oddity. It feels less like a film and more like a couple of singers and their friends come together to have a good time. Even though there are a number of regular actors present and Freddie Francis has assembled a crew that he has worked with before, including regular screenwriter/actress Jennifer Jayne (operating under the Jay Fairbank pseudonym), the film still feels like it only has a vague idea about what is wanted to be.

Son of Dracula sort of falls into the fad for monster comedies that were being made around the time that began with Young Frankenstein (1974) – even though Son of Dracula predates Young Frankenstein by several months. There was a brief attempt to retitle the film as Young Dracula to take advantage of this but it failed to sell. (You suspect if Son of Dracula had been made after Young Frankenstein, it might have had more of clue what is wanted to do). The film flopped badly and was little seen anywhere. It has even failed to be resurrected on dvd/video as a curiosity by those who search out such material.

Son of Dracula is dull. Most of it consists of Harry Nilsson wandering around without ever doing much. Occasionally he sings a song. Towards the end, there is some skulduggery as Baron Frankenstein (Freddie Jones) tries to thwart Nilsson’s plans to shuck off his destiny at the coming astrological conjunction and become a mortal for the sake of love. These complications only come in near the end and the rest of the film fails to ever materialise into a plot.

Wandering about contemporary London in a cape with curly red hair and bushy beard, Harry Nilsson manages to look about as far removed as it is possible to get from the darkly magnetic Draculas incarnated by Bela Lugosi and Christopher Lee (whom Freddie Francis had earlier directed in Dracula Has Risen from the Grave (1968), Hammer’s fourth Dracula film). He gives a mildly brooding performance but it is far too mellow for anything we expect from a character bearing the Dracula lineage. Certainly, Nilsson does better in the opportunities when he gets to sing with the Remember Christmas number in the middle of the film being a particular standout.