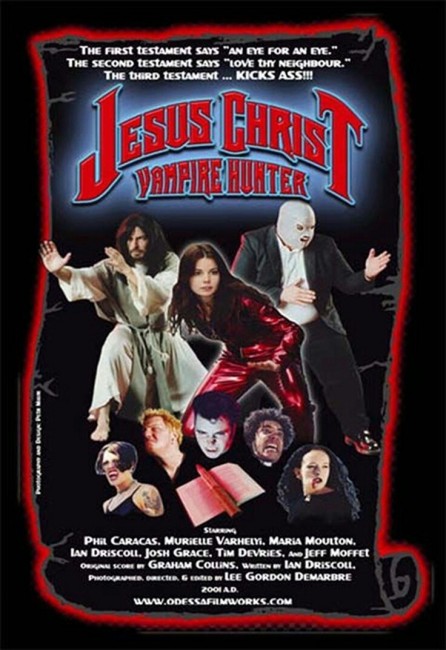 Priests implore Jesus Christ to help in dealing with the vampires that are plaguing Ottawa. Armed with a bag of stakes and his kung fu, Jesus sorts the vampires out as they prey on the city’s lesbians.

Jesus Christ, Vampire Hunter surely has a place in the list of the great wacky/exploitation movie titles of all time – alongside the likes of I Was a Teenage Werewolf (1957), I Married a Monster from Outer Space (1958), The Incredibly Strange Creatures That Stopped Living and Became Mixed-Up Zombies (1964), Slave Girls from Beyond Infinity (1987), Sorority Babes from the Slimeball Bowl-O-Rama (1987), Poultrygeist: Night of the Chicken Dead (2006) and Mega Shark vs Giant Octopus (2009). As such, Jesus Christ, Vampire Hunter comes with just the right degree of wacky genre collusion, not to mention brash swagger of blasphemy, designed to outrage a certain overly opiniated sector of the populace.

Jesus Christ, Vampire Hunter starts in well. It is conducted with a goofy sense of humour that sets the scene – Jesus (Phil Caracas) is blessing people on a beach when they are attacked by lesbian vampires, which Jesus dispatches via his kung fu, while suggesting to his disciples that they bless the entire lake to use as a convenient source of holy water. The subsequent scene has Jesus preaching to a gathered group of followers from on a skateboard and healing cripples in the street and at traffic lights, all of which is conducted as a musical number where Jesus gets to collude rhyming couplets like “I was born in a manger/I live a life of danger.”

Unfortunately, after the initial first fifteen or so minutes, the goofy wackiness dissipates and Jesus Christ, Vampire Hunter becomes a much less interesting film. The plot throughout the rest of the film never involves much more than Jesus running around accompanied by various disciples as he takes on the vampires in a series of kung fu sequences. The martial arts sequences maintain a bare competence but are nothing to write home about. There are some cheap and unconvincing gore effects. Although, there is at least one amusing sequence with Jesus and Santos in a bar taking on vampires en masse and turning everything from bar stools, crutches, drum sticks and toilet plungers into makeshift stakes and Jesus at one point blessing a pitcher of beer then drinking a mouthful and spraying the vampires with it.

The unfortunate thing is that Jesus Christ, Vampire Hunter has a title concept that is far superior than the filmmakers know what to do with. The title concept drives the film but Lee Demarbre and company have surprisingly few ideas about where to take it. The plot becomes repetitive and the pace drags. There are a number of scenes that have a decided wackiness – Jesus having conversations with a talking bowl of ice cream and cherries, or Mary calling up Jesus via flashing plastic Virgin Mary statue, not to mention the appearance of a masked lucha libre wrestler Santos, clearly modelled on the famous Mexican wrestling superhero El Santo – but surprisingly less than you might think. Even the Jesus Christ angle is of surprisingly little import to the film – there is the odd Bible verse quoted by a wild-eyed, long-bearded individual who keeps popping up and an equivalent of the Sermon on the Mount at the end, but little more than that. For the most part, this could just be a goofy well-below-B-budget vampire film.

The casting is passable for the most part. Many of the actors are amateurs but generally have sufficient capability for the parts, apart from an annoyingly giggly and over-the-top performance from Josh Grace as the mad scientist. As Jesus, Phil Caracas plays with a blithe comic imperturbability that suits the part rather well. The one standout is the incredibly foxy Maria Moulton who is well cast as a disciple who appears to have been modelled on Emma Peel (before alas being prematurely written out). Moulton moves with a class that shows she could easily have gone onto do other things.

Jesus Christ, Vampire Hunter was the first film from Canadian director Lee [Gordon] Demarbre. Demarbre subsequently went onto make Harry Knuckles and the Pearl Necklace (2004), a similarly tongue-in-cheek action movie expanded from a series of earlier short films by Demarbre, which has some surreal fantastic elements; Smash Cut (2009) about a director who starts to slaughter the critics that have savaged his latest film; and the abduction and imprisonment thriller Summer’s Blood (2009). Demarbre has also made the fantastic sounding Vampiro: Angel, Devil, Hero (2008), although this is only a documentary about a lucha libre wrestler.