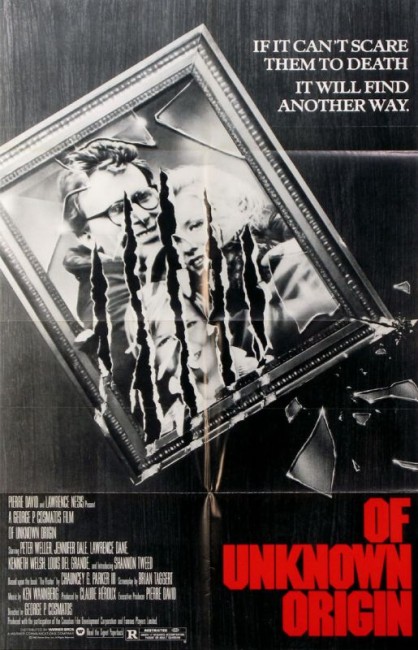 Wall Street executive Bart Hughes’s wife and son leave him for a few weeks and he looks forward to settling down to do the hard work that will earn him a promotion. He soon discovers that a rat is plaguing his recently self-renovated brownstone home. He attempts to kill the rat using traps and poison but it proves too smart for these. It even kills a cat that Bart brings home. As the rat starts to savage more and more of the household, Bart becomes obsessed with killing it, neglecting his work and employing increasingly more extreme measures.

Of Unknown Origin is perhaps the most interesting film in the oeuvre of expatriate Greek director George Pan Cosmatos. Cosmatos moved onto the international stage with his third film, the disaster movie The Cassandra Crossing (1976), followed by the war movie Escape to Athena (1979). Of Unknown Origin was his fifth film as director. It was not a huge success but Cosmatos subsequently enjoyed the hit of the Sylvester Stallone vehicles Rambo: First Blood Part II (1985), Cobra (1986) and Rambo III (1988), as well as sporadic films throughout the next decade such as the monster movie Leviathan (1989), Tombstone (1993) and Shadow Conspiracy (1996). Most of George Pan Cosmatos’s work is hackwork but Of Unknown Origin is one film that stands out.

In many ways, Of Unknown Origin reads like a straight version of the children’s film MouseHunt (1997) in which various comic characters try to trap an uncannily intelligent mouse. Indeed, around the same time that Of Unknown Origin came out there were a number of other rats amok films with the likes of Deadly Eyes (1982) and the Italian Rats: Night of Terror (1984), as well as the Night of the Rat episode of the anthology Nightmares (1983). Although the best of these was the During Barty’s Party episode of the UK anthology tv series Beasts (1976) in which we never see any rats.

The film becomes about stripping business executive Peter Weller away to a primal survivor – the destruction of his perfect house, his job – to the point where he is reduced to smashing the house up and wading through flooded water. As much as it is a rat amok film, Of Unknown Origin is also a conte cruel. There is a highly amusing sense of surreal escalation to the basic conflict – of how we see both Peter Weller and the rat mutually training for the coming conflict.

There is a surprising level of social subtext to the film. Much contrast is made between Peter Weller’s Wall Street banking job and his “getting his hands dirty” by taking on the rat. There is some fine writing in the film – especially in the scenes where Louis Del Grande’s exterminator character shoots down all of Weller’s ideas of dealing with the rat. The writer has done a fine job researching the topic of rats. One of the best scenes is where Peter Weller attends a posh dinner and makes the guests feel uncomfortable by talking about the tenacity of rats, their threat throughout history and how some people regard them as a delicacy. There is a looming sense of the apocalyptic over the film – that humanity is starting to lose a battle with rats – with scenes showing how most of the exterminators in the city are too busy to even returns calls, of the facts that Peter Weller cites at the dinner party about how rats killed a third of the population by carrying the Black Plague and how rats eat one-fifth of all grain.