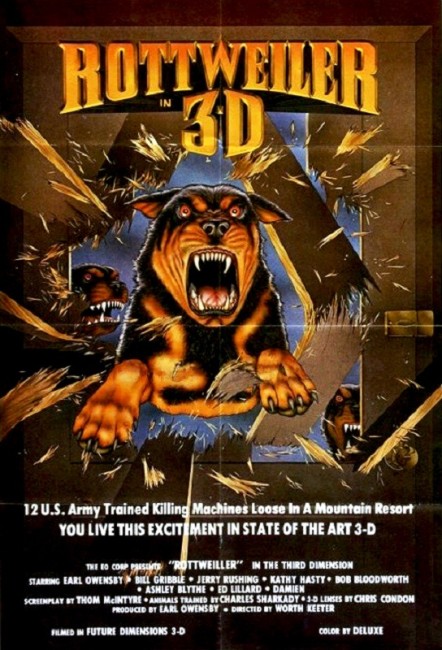 aka Dogs of Hell

A truck containing a shipment of Rottweiler dogs being shipped by the US military overturns near the small town of Lake Lurie, North Carolina. The town’s sheriff Hank Willis is approached by Adam Fletcher who explains how he helped develop a program to train the dogs for military usage. When Fletcher saw that his program was being subverted to make the dogs into killing machines, he tried to warn that this would cause them to turn against humans but was ignored. Willis and Fletcher now try to stop the dogs as they start attacking the townspeople.

Earl Owensby was a producer/actor who gained prominence making low-budget films for the drive-in circuit in the 1970s/80s and later the video era. Owensby first self-financed and starred in the revenge film Challenge (1970). The success of this allowed him to establish Earl Owensby Studios in Shelby, North Carolina in 1974. From there Owensby went on to produce/star in The Brass Ring (1974), Dark Sunday (1976), Death Driver (1977), Seabo (1978), Wolfman (1979), Living Legend: The King of Rock and Roll (1980), Hit the Road Running (1983), Chain Gang (1984) and The Rutherford County Line (1987). Owensby also produced but did not star in Lady Grey (1980), A Day of Judgement (1981), Hot Heir (1984), Hyperspace/Gremloids (1984), The Last Game (1984) and the anthology Tales of the Third Dimension (1984). Owensby’s name faded after that, although in interesting trivia note he purchased an uncompleted nuclear power plant in South Carolina and turned it into the underwater stage where James Cameron filmed The Abyss (1989).

Rottweiler, also frequently known as Dogs of Hell. should not to be confused with Brian Yuzna’s later cyborg dog film Rottweiler (2004). The film has a premise about a town at siege from dog attacks. This is following on from the 1970s fad for Animals Attack films that came about after the success of films like Willard (1971), Frogs (1972), Jaws (1975) etc – although the popularity of these films had fairly much run its course by 1983 when Rottweiler came out. (or an overview of the genre see Animals Amok Films).

The problem with Rottweiler is simply that director Worth Keeter fails to create anything interesting out of the dog attacks. The early scenes where the dogs attack a camp are cheap and unconvincing. Other films among the Animals Amok genre of this period – Dogs (1976), Zoltan … Hound of Dracula/Dracula’s Dog (1978) and especially The Pack (1977) and Cujo (1983), even the dog attack scenes in The Omen (1976) did far better, being able to afford animal trainers and to shoot and edit the scenes in ways that dramatically heightened the attacks. Here the dogs and actors never interact in the same frame and Worth Keeter does nothing to generate a sense of menace. It is only in about the last fifteen minutes that things start to come together and the dog attacks are made to work.

Rottweiler is made with a clear pitch to the drive-in audience of the day – we even get an entirely gratuitous mud wrestling sequence at one point. The film was also shot in the brief 3D revival fad that was sparked by the unexpected success of Comin’ at Ya (1981). As a result, we get various things being thrust out of the screen and into our faces including dog snouts, and especially knives and poles during the climactic fight sequences.

Earl Owensby habit of taking the lead in his own films was undeniable vanity casting – the early sections spend quite a bit of time depicting his sheriff as an affable and well-liked guy with all the townspeople. Certainly, it has to be said that Owensby makes for a passable leading man.