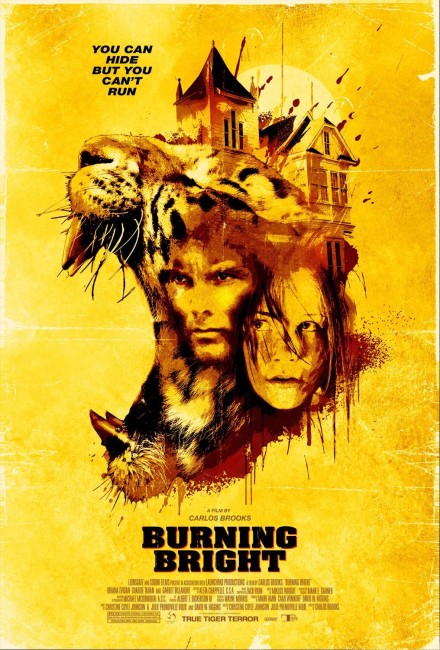 Kelly Taylor is about to leave for university on a scholarship. She prepares to sign her autistic younger brother Tom into a special needs school only to find that her cheque for his fees has bounced. She discovers that the money that was left to look after him by her late mother has all been withdrawn by her stepfather Johnny Gavaneau. He is intending to turn their ranch into a safari park and has used the money to buy a Bengal tiger. Kelly is upset as this means she will lose her scholarship. She wakes in the morning and is startled to find the tiger prowling free in the house. Johnny is gone and all the doors and windows have been boarded up against a hurricane that is about to hit. Realising that Johnny has imprisoned them with the intent of killing them, Kelly tries to find a way for her and Tom to escape as the tiger tears the house apart coming after them.

There have been a great many Animals Amok films ever since the genre was started with Alfred Hitchcock’s The Birds (1963) and was popularised by Jaws (1975). During this time, almost every animal species, particularly of the predatory variety, has been used as the basis of a film. Surprisingly though, there have been very few Animals Amok films about lions and tigers. The only item about killer tigers that my search turns up is Maneater (2007). There are slightly more films about killer lions with Savage Harvest (1981), Prey (2007), Prey (2016), Rogue (2020) and Beast (2022), as well as the high-profile The Ghost and the Darkness (1996) about a village under attack by lions (although that was only a borderline genre film).

Burning Bright makes an assiduous attempt to avoid the cliches of the Animals Amok genre. Even the title of the film is a literary reference to the poem The Tyger (1794) by William Blake. This is more than evident from the groundwork that is laid in the opening scenes. The first has Garret Dillahunt meeting with an uncredited Meat Loaf to buy the tiger and Meat Loaf talking about the threat contained in the cage – we never get to actually see the tiger throughout the scene – and how it escaped last week and tore a horse apart.

We then disorientingly cut to Briana Evigan trying to deal with Charlie Tahan as her autistic brother who is agitated as she take him to be settled in to a new school so that she can go to university – only to find that her cheque has bounced. The kicker of the scene is when she picks up the phone to call her stepfather about what happened to the money and speaks of him wanting to set up a safari ranch and we realise with a jolt that Dillahunt is her stepfather and the money he gave to Meat Loaf in the opening scene was from the account.

Thereafter, the film is propelled into the realm of great suspense by the containment of the situation. In fact, Burning Bright plays out more as an Imprisonment Thriller – a la Phone Booth (2002) or Frozen (2010) – than it does an Animals Amok film. There is the decidedly WTF moment as we get a brief shot from the viewpoint of the camera planted inside the tiger cage of someone dragging it into the house. This is followed by the scene where Briana Evigan wakes up and goes downstairs and the two completely WTF shots we then get as we see the tiger prowling through the hallways. This suddenly propels us into a nightmare situation. We have no idea what has happened to Garret Dillahunt, although the scene dragging the tiger into the house and the cutaway to him at the bar in mid-film gives the increasingly clear implication (later confirmed) that he left the tiger in the house with the intent of killing them off.

Carlos Brooks delivers some incredible tense seat-edge tension – with Briana Evigan trying to slither up the laundry chute as the tiger prowls about below, the slipperiness of the tube causing her to sweat and a single drop falling on the floor, giving her away and the tiger then trying to force itself up the tube as she tries to escape up its narrow confines. Or the scene where she and Charlie Tahan hide under a bed as the tiger prowls about the room, even jumps on top of the bed, forcing them to huddle against the wall with only the mattress and frame sheltering them from it.

What is remarkable about the film is the fact that none of the actors or tigers used ever appeared together in the same scene – there are a few shots where they appear to do so but these were all digitally patched together – a remarkable example of the power of suggestion and clever editing.

The character groundwork that has been laid in the early scenes makes for an Animals Amok film that is terrifyingly real, not filled with generic Characters in Peril types. The autistic brother is an ingenious addition to the mix with he sliding into his patterns at the most inopportune moments – sitting down to demand his breakfast in the kitchen or even more hair-raisingly to watch his favourite videos as the tiger prowls about the living room and jumps on the dining table. The result is an uncommonly effective addition to the genre.

Burning Bright was only the second film from Carlos Brooks who had earlier made Quid Pro Quo (2008) about acrotomophilia. The surprise is that Brooks has not been heard from since. Based on the work that he delivers here, one would be highly interested in seeing more offerings from him.