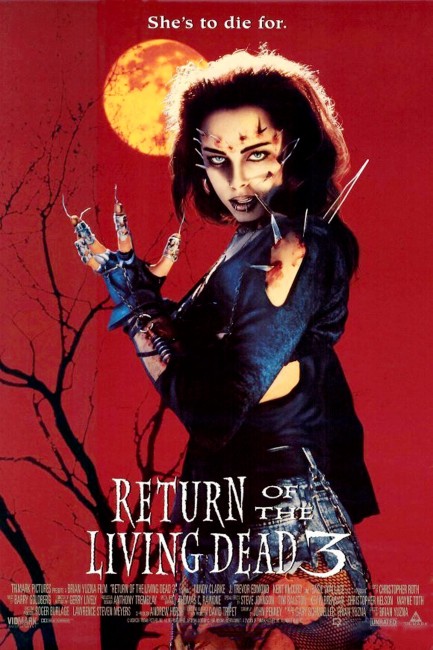 Curt Reynolds’ father commands a military base. Curt steals his father’s electronic access card and sneak into the base with his girlfriend Julie Walker. They watch from hiding as Curt’s father oversees an experiment to use the zombie nerve gas to revive the dead. The military are intending to turn the zombies into soldiers, using stun bolts fired into their heads to quell the restless hunger for brains. Curt then crashes on his motorcycle and Julie is thrown into a lamppost and killed. Curt sneaks back into the base with her body, opens one of canisters and uses the zombie gas to bring her back to life. Revived, Julie is horrified to discover what she has become. Her feelings for Curt are enough prevent her turning on and devouring him for the moment. However, as they are hunted by both the military and a gang of Latino hoods, Julie finds it harder to retain control as the hunger for brains takes over.

The only point in common between all of the Return of the Living Dead films is the use of the military gas. Unlike its two predecessors, Return of the Living Dead III is not even a comedy. Unlike Return of the Living Dead Part II, it at least takes the basic concept into intriguing new territories. Now the zombie outbreak and apocalypse plot has been replaced by a tragic love story. At the centre of the film is Mindy (aka Melinda) Clarke, an actress of occasional genre associations in films such as Killer Tongue (1996), Spawn (1997) and a good deal of genre tv, although best known in recent years for a regular role in The O.C. (2003-7).

With unnaturally pale skin, wide forehead and dyed red hair, Mindy Clarke seems weird and unearthly even before she becomes a zombie. The main thrust of the story focuses around her learning that she is a zombie and the struggle not to eat boyfriend J. Trevor Edmond’s brains. The film never quite succeeds at what it sets out to do but its personal angle is an original and refreshing one after a plethora of bad zombie films that clogged up cinema screens in the 1980s and 00s.

One of the elements of Brian Yuzna’s films – at least his earlier work in the 1990s, before he moved base to Spain – was a fascination with perverse imagery. The parts of his films that one remembers are incredibly outre images like the climactic shape-shifting orgy in Society or the various sadistic misuses made of dental instruments in the Dentist films. Yuzna appears to enjoy these startling images, although the criticism that might be made is that some of his films, like Society and Bride of Re-Animator, are only hung around a single perverse climactic scene. Much of Return of the Living Dead III seems to have been conceived around the striking image of the undead Mindy Clarke unveiled as a human porcupine with needles inserted all over her body and spikes through her nipples, supposedly on the theory that the pain takes away the hunger for human brains.