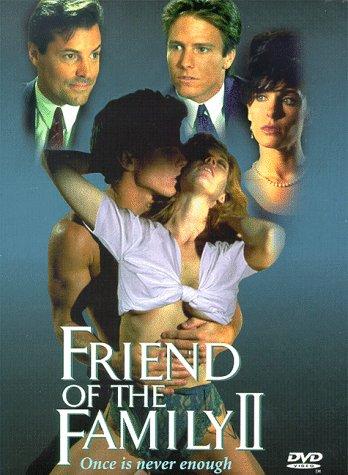 aka Friend of the Family II; Hell Hath No Fury; Innocence Betrayed

While in New Orleans, businessman Alex Madison has an affair with Linda, a girl he meets in a restaurant and consoles after she has a fight with her e. In a matter of days, Linda falls in love with him. Alex then decides to return to his wife Maddy. Shocked at not only being dumped but to also find that the e that she abandoned for Alex has committed suicide, Linda swears vengeance. She follows Alex back to San Francisco and goes to his house. Maddy thinks that Alex has come to apply for a babysitting job and gives her the position. Inside the house, Linda blackmails Alex into sleeping with her, while also manipulating all the people around him in order to obtain her revenge.

Passionate Revenge is a made-for-cable erotic film. (Although, the version seen here appears to be one where several, but not all, of the heated embraces have been cut out). It was originally released under the title Friend of the Family II as a sequel to Friend of the Family (1995), which featured Shauna O’Brien as a woman who ends up moving in with and sexually liberating a troubled family. Other than featuring Shauna O’Brien as a guest in another married couple’s house, the two Friends of the Family films are otherwise unrelated – the original, for instance, contains much softcore sex but no psycho-thriller elements. Behind the name Nicholas Medina is Fred Olen Ray, an amazingly prolific B-budget hack who has directed a number of sf/action and cheap monster movies. (See below for Fred Olen Ray’s other films).

Alas, Passionate Revenge is mediocre. Fred Olen Ray is not very good at directing scenes. The exchanges between his cast are bland and lacking in enervation and it is all flatly photographed. There are certainly scenes that would have been much more interesting if they had been played in a film where there was less emphasis on the erotic and more on a darkly psychological undertow – like where Shauna O’Brien moves into the house and blackmails hubby Paul Michael Robinson into having sex with her on the threat of telling his wife. At one point, she walks into the marital bedroom in her underwear while the wife is asleep and announces to him: “I expect you to make an appearance in my room tonight.” The scenes where she seduces the wife’s kid brother and the tension-filled business dinner could have held similar potential in another film.

Typical of these post-Fatal Attraction psycho-thrillers, Shauna O’Brien is given no motivation or even characterization beyond being either completely in love or a calculating avenger. There is a bizarrely hurried ending where for no apparent reason she starts shooting in front of cops and is shot down, while the film goes out on a note of uncertainty as to whether Paul Michael Robinson is dead and the wife then starts panicking “Oh my God, where’s the baby?”