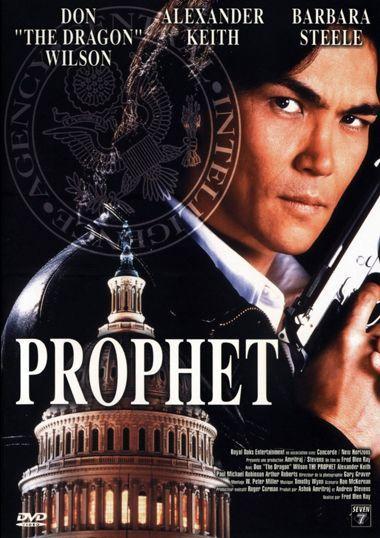 aka The Capitol Conspiracy

FBI agent Jarrid Maddix is assigned to track down five people that his superiors claim are terrorists. As Maddix and his partner Vicki Taylor track the five down, Maddix discovers that there is more going on than he has been and that all of the group experience clairvoyant visions. This is something that Maddix also discovers that he can do as well. As Maddix’s superiors realise that he knows this, they assign an agent to eliminate him. On the run, Maddix tries to expose the top secret Project Sunstreet where the group were experimented on as children to develop psychic abilities.

Prophet – no relation to the recent brutal French prison film A Prophet (2009) – comes from B-budget director Fred Olen Ray. Fred Olen Ray is one of the most prolific directors in the world and has made numerous films that usually fall into the cheesy science-fiction and horror or action category and are especially notable for featuring a line-up of bimbos. (See below for a full list of Fred Olen Ray’s other genre films).

Prophet is one of the handful of action films that Fred Olen Ray put out under the pseudonym of Ed Raymond via the Royal Oaks production company of former actor Andrew Stevens and in conjunction with Roger Corman’s Concorde-New Horizons combine. Here Olen Ray collaborated with Asian-American kickboxing champion turned B-budget action hero Don ‘The Dragon’ Wilson upon the second of two occasions following the earlier non-genre Inferno (1998).

Fred Olen Ray’s action scenes in Prophet are competent, especially the fight scenes aboard and around the train. There is a great scene in a carpark where Don ‘The Dragon’ Wilson does a forward-roll up over the roof of an oncoming car and starts shooting at the car while coming down the other side, and then being pinned against a wall as a car comes speeding towards him but managing to survive by ducking down into the overhang between the car’s tires and where its hood impacts with the wall.

On the minus side, Prophet is severely lacking in the script department. There are a number of similarities between Prophet and The Power (1968), which was also about a man on the run, involved psychic powers and the eventual revelation that the hero had them too. Here however, Olen Ray does little with the mystery aspect of the film. The plot set-up is absurdly contrived. Take this:– Don ‘The Dragon’ Wilson is one of the six children with psychic abilities but does not know it. He grows up and becomes an FBI agent where he is then coincidentally assigned to track down his fellow experimental subjects. Quite why the FBI wants to track the others down and why they lead Don The Dragon to believe that he is tracking terrorists is never established. When Don The Dragon finds out the truth about the program and the charade that has been pulled over his eyes, for some reason the FBI get all surprised and send various assassins to hunt down and eliminate him. Surely the far more obvious plan would have been to send someone who did not have psychic powers or had come from the same experiment themselves? There is an equally unbelievable revelation two-thirds of the way through about a traitor.

In fact, by the time one reaches the end of the film, the psychic powers angle proves to be of little relevance to the story. The film reaches a bizarrely abrupt ending where Don The Dragon enters the experimental complex, remembers back and then the film abruptly ends, leaving you feeling that the story is only about two-thirds told. As to what the experiments were about or what the experimenters were trying to achieve, we are never told at all.

One of the more amusing things about Prophet is how Fred Olen Ray finds laughably contrived reasons to get heroine Alexander Keith naked – Don ‘The Dragon’ Wilson arrives at his hotel room to find her in stepping out of the shower (and meets her for the first time) where she explains that her room wasn’t cleaned yet so she just popped into his room to take a shower. Later she comes to his room to get his help changing her bandage – “I know how you can help me feel better,” she tells him.