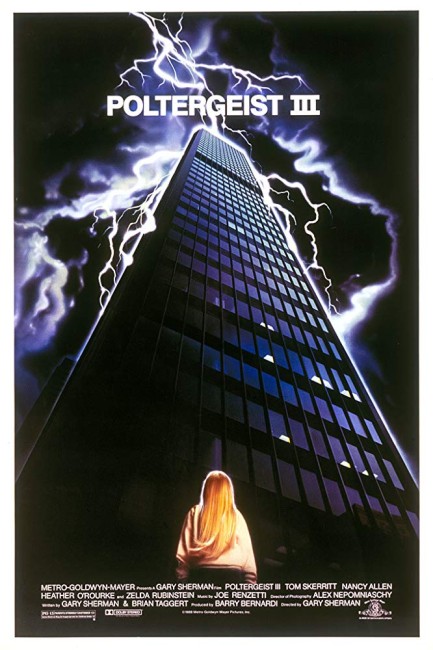 Carol Ann Freeling is now living with her aunt and uncle Patricia and Bruce Gardner in Chicago. When a psychiatrist tries to delve into her past, he succeeds in resurrecting Reverend Kane who takes over the entire apartment block where the Gardners live to get to Carol Ann.

This is the second sequel to Poltergeist (1982). It is certainly better than the first sequel Poltergeist II: The Other Side (1986), although that isn’t saying much. And it isn’t particularly good. The director this time around is Gary Sherman, who had previously made Death Line/Raw Meat (1972), which has a minor cult in some places, as well as the smalltown zombie film Dead & Buried (1981) and subsequent to this, the psycho-thriller Lisa (1990), the medium thriller Murderous Vision (tv movie, 1991) and 39: A Film by Carroll McKane (2006).

At least, Gary Sherman has much more interesting directorial style than Brian Gibson demonstrated in the first sequel. A lot of the film is schlocky and silly but there are a few brief moments where Sherman fleetingly eschews the gamut of effects trickery that drove the previous films in favour of a series of subtle, eerie manifestations centred around mirrors.

In fact, Poltergeist III is sort of like a down-market episode of tv’s Sapphire & Steel (1979-82) and its constant unsettling temporal perturbations – characters do one thing and their reflection another; Nancy Allen has a conversation with Heather O’Rourke in the mirror moments before O’Rourke enters the room; Kane’s reflection watches from inside the reflection of an open doorway in the mirror; as O’Rourke walks down a hallway, a line of doorways open in mirror reflection but not in physicality. There is an especially nifty scene with two characters who return from the beyond turn and walk down a hallway where the lettering on the backs of their jackets is seen to be in reverse, spelled the correct way in the mirrors.

Unfortunately, it is a downhill trail in the latter half as the plot dissolves into a barrage of shock effects that become increasingly sillier – freezers full of food come to life, attack by frozen cars in a parking lot and Zelda Rubinstein at one point ‘giving birth’ to Lara Flynn Boyle. If the last twenty minutes had been cut and the film stayed with the mirror imagery, Poltergeist III might have been a decent film.

One plus is the good cast – Heather O’Rourke, who died of an intestinal blockage just before the film’s release (aged only thirteen) and to whom it is dedicated, has grown up an accomplished, intelligent actress since her flat performance in the first film. Zelda Rubinstein is the only other returnee from the other films. Rubinstein was superb in the first film but ended up being disappointingly wimped out in the second. She has been restored to some of her former glory here, although the mysticism has only gotten nuttier and not even she manages to force any patent belief in it.

Tom Skerritt, one of the most modest and underrated actors around, brings an enormously warm and likable screen presence. Lara Flynn Boyle, later of tv’s Twin Peaks (1990-1) and The Practice (1997-2004), plays the teenage daughter in her screen debut. Richard Fire’s psychologist character suffers from the way it is written, with the script’s insistence of some of the most absurd rationalising – there being one laughable scene where he insists that a spontaneous display of psychokinesis in a room of observers is all down to mass hypnotism.