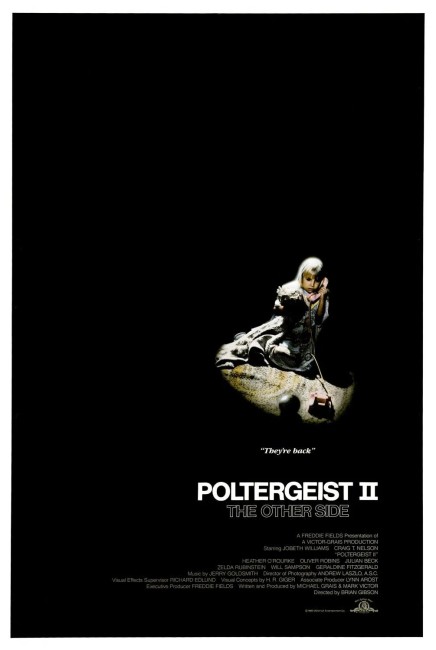 The Freelings have been forced to move in with Diane’s mother, now broke because their insurance company has refused to pay out on a house that has completely vanished. Otherworldly spirits, including the ghost of Reverend Kane, a puritan minister who died along with his followers on the site of their house, appear, determined to take Carol Ann. Guided by an Indian shaman, the family must journey over onto the ‘other side’ to confront The Beast once and for all.

Grais and Victor said that they made this film because there was a lack of resolving confrontation in the first – if that is the case, then Poltergeist III was inevitable as Poltergeist II: The Other Side resolves nothing either. Oh, the family crosses over into the netherworld but we never understand why. By the end, Carol Ann has been saved again but there has been no confrontation with the Beast and Reverend Kane is still wandering about out there in the world.

At no point does this film try to patch up any of the large logic holes in the first film’s script. Nor do Grais and Victor clear up the first film’s muddled motivation about graveyards with unmoved coffins, gateways to Hell and Indian burial grounds. Indeed, they only add even more complicated nonsense about puritan graves, Indian magic and devil-possessed preachers to the already overflowing scramble of ideas.

The entirety of the cast from the first film has been reunited with the exception of Dominique Dunne who played the teenage daughter and who was shot by her boyfriend shortly after Poltergeist premiered – her absence is discreetly explained away as her having gone to university. The appeal of the first film was largely in the warm, everyday characterisations. Here director Brian Gibson lacks the ability to draw that warmth of character out of the actors a second time around.

Despite being reunited, everybody walks through their roles with a perfunctory lack of lustre, most disappointingly Zelda Rubinstein, the first film’s scene stealer. Craig T. Nelson overacts badly throughout – he looks downright silly trying to act possessed. Contrarily, while the regulars seem dull, it is the newcomers who add some zing to the film. Will Sampson adds an otherworldly presence as the Indian shaman, while Julian Beck is downright creepy as Kane.

There is a new director in Brian Gibson, who had previously directed the tv play of Dennis Potter’s Blue Remembered Hills (1978) and the punk musical Breaking Glass (1980) and would go onto the unexceptional likes of What’s Love Got to Do With It (1993), The Juror (1996) and Still Crazy (1998).

Without Tobe Hooper and Spielberg’s guiding hand, this is a by-the-numbers spook show – almost nothing happens for the first half-hour. One can see how empty the film is by the number of false shocks that Gibson whips up – how the unscary image of a snake crawling through a skeleton early on is blown up to dramatically ludicrous heights by the operatic shriekings of score and sound effects in an attempt to make people jump.

It is the same the whole way through with every set-piece only getting sillier – attacks by garage implements, the fillings in Oliver Robbins’ teeth turning into a metal cocoon that envelops him and at the absolute height of silliness the worm in a bottle of tequila turning into a giant mutant bug that emerges to possess Craig T. Nelson.

This was followed by the inevitable Poltergeist III (1988), which does demonstrate a degree more imagination. Poltergeist (2015) was a remake of the original.