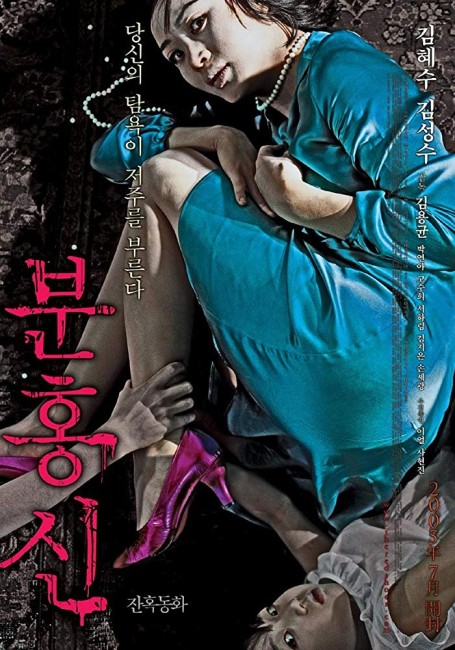 After Han Sun-Jae finds her husband Sung-joon in bed with another woman, she leaves him and moves out into a rundown apartment with their young daughter Tae-su. She prepares to set up her own optometrist business and hires the eccentric architect Cho In-Cheol to design a set of offices for her. On the subway she finds a pair of pink high-heeled shoes and brings them home. Putting them on, she is transported into a fantasy of being a dancer. At the same time, Tae-su insists that the shoes are now hers and keeps taking them, acting angrily when Sun-Jae tries to reclaim them. Sun-Jae’s friend Mi-Kee steals the shoes but is then found dead, thrown through a glass window. Sun-Jae starts to see apparitions and realises that there is something ghostly about the shoes.

Asian horror seems to be where it is all happening in the 00s, in particular in Japan. So much so that Hollywood has been buying up a host of Asian horror properties and remaking them in English language. Although overshadowed by Japanese contributions, South Korea has become a major cinematic force in the 1990s and has started to produce a body of horror films of its own, often drawing from the J-horror models but also creating a number of strong entries that stand on their own.

The Red Shoes was only the second film from director Kim Young-Gyun. Kim supposedly takes inspiration from the Hans Christian Andersen fairytale The Red Shoes (1845) about a young girl whose red shoes take over her feet and won’t stop dancing. The Hans Christian Andersen fairytale is probably best known through the Michael Powell ballet film The Red Shoes (1948). (These two versions of The Red Shoes are unconnected except by title). A straight version of the fairytale in itself would make for a good horror film – in the original version, the girl has an executioner chop her feet off with an axe, only to find they will still not stop dancing and then that the disembodied shoes are following her everywhere.

The fairytale is loosely used as a motif here in the theme of the people who become obsessed with owning the pair of shoes and their ability to transfer the wearer into a fantasy where they are dancing. (I must admit to being confused – in the version of the film I saw the shoes were pink as opposed to red, although cannot be sure this may not have been some colour loss due to the recorded version of the film from cable. On the other hand, one supposes that The Pink Shoes can not have held much scary potential as a horror title).

Kim Young-Gyun does a fair job of approximating common motifs of the Asian horror cycle. You keep getting reminded of other Asian horror films – the scenes with the single woman moving into the drearily rundown apartment are strongly reminiscent of Dark Water (2002) (although seeing the woman then funding an upmarket optometrist shop after claiming to only to be able to afford such a grotty apartment makes these scenes ring a little false, as though Kim Young-Gyun is twisting the set-up out of shape in order to imitate Dark Water). There is a scene where Kim Hye-su encounters something in an elevator, which reads as though Kim Young-Gyun had blatantly attempted to replicate the famous elevator scene from The Eye (2002) by casting it with Sadako from Ring (1998). Like a great many copies of Ring, the film ends with the revelation that the haunted item is due to a woman demanding vengeance in the present for a crime in the past.

Kim Young-Gyun gives The Red Shoes a captivating opening where two teenage girls fight over the shoes after finding them on a train platform, one puts them on but then collapses in the middle of the platform, whereupon Kim pulls his camera back to reveal her sitting there with bloody stumps where her feet were and a long trail of blood leading away. Mostly though, Kim Young-Gyun’s approach is subdued and low key – the film takes some time to build to its effect. As the film progresses, the lighting contrast dims and starts to brood with dark shadowy atmosphere. Kim achieves much through the use of lighting effects, in particular in the colour contrasts that illuminate and emphasise the pink of the shoes or the daughter in a red dress or bright red lipstick.

Despite promising atmosphere, The Red Shoes starts to fall apart at the end where it is impossible to figure out what is happening. [PLOT SPOILERS]. One predicted the revelation the film reaches where it is shown that Kim Hye-su really killed her husband. However, one is entirely confused by the subsequent scenes where she goes to the railway station and a ghostly figure (of who one is not sure) appears and taunts her that she is really Oko (who stole the red shoes in the flashback) and that she is the murderer of the ghost girl Keiko. This revelation confuses one completely – does it mean she is Oki and has amnesia about who she is? In which case why is she not in her sixties like Sun-jae? Or does it mean that she is possessed by Oki’s spirit? None of this is clear.