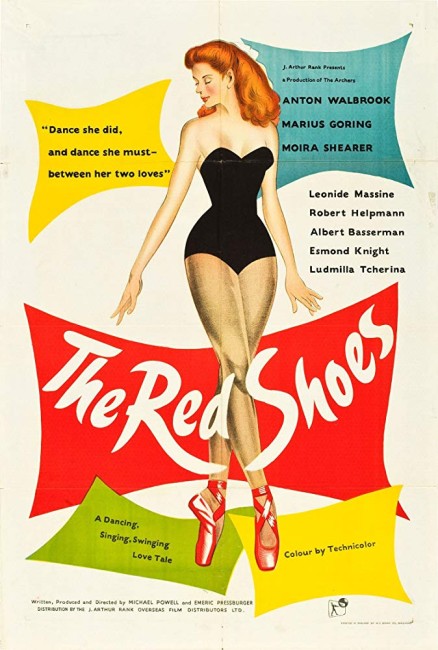 Musician Julian Craster and ballerina Victoria Page become apprentices with the ballet company of the autocratic Boris Lermontov. Lermontov asks Julian to write a ballet adaptation of Hans Christian Andersen’s `The Red Shoes’, a story about a pair of shoes that force a girl to keep dancing. Julian does and Victoria rises to fame in the lead role. The two of them fall in love, but this displeases Lermontov who demands that Victoria make a choice between love and her art.

British director Michael Powell and his producer, sometimes co-director Emeric Pressburger came to fame during the Wartime era with a series of fabulous Technicolor films. These included the likes of The Thief of Bagdad (1940), the romantic drama The Life and Death of Colonel Blimp (1943), the modernised A Canterbury Tale (1943), the afterlife fantasy A Matter of Life and Death/Stairway to Heaven (1946) and the Himalayan nun drama Black Narcissus (1947). All of these were gorgeous, stunningly photographed fantasies cast on an epically visual, almost painterly canvas that swept British homeland audiences caught in the dreariness of the Blitz and Wartime shortages away into a world that was larger than life, if not outrightly fantastique. Two of the most well remembered of the Powell-Pressburger productions were their ballet films, The Red Shoes and The Tales of Hoffmann (1951).

Michael Powell sets The Red Shoes on a colourfully expansive canvas. The film is shot in ravishing colour by Powell’s frequent collaborator Jack Cardiff. The sets and especially the scenery are absolutely gorgeous – midnight coach rides along the Monte Carlo coastline, harbours of torch-lit gondolas, Moira Shearer’s sweeping journey up a huge row of moss-stained steps. The ballet is magnificently choreographed, especially the Red Shoes number, which takes off in a ten-minute vignette of its own, soaring away into pure expressionist fantasy.

On this stage, Michael Powell tells the story in bold, sometimes cornily melodramatic, nevertheless beautifully simple strokes. He is wonderfully attuned to the subtlety of emotional nuance – some of the interplays that go on in the opening scene or in Moira Shearer and Marius Goring’s continually being ignored during the audition have a finesse that other Technicolor spectacle directors never easily found.

The Red Shoes is one of the few ballet films that can be enjoyed by people that don’t like ballet. Many of the cast members were actual ballet performers rather than actors. In flaming red hair, the demure Moira Shearer is absolutely lovely. Anton Walbrook overdoes the accent, like most of the horribly overacted but shamelessly likeable foreign characters, although this is something that serves the melodramatic plot perfectly.

Mostly, The Red Shoes is a film about the backstage melodramas of the ballet, although it certainly becomes outright fantasy at the tragic ending.

The film is very loosely based on a Hans Christian Andersen fairytale The Red Shoes (1845) about a little girl whose shoes will not stop dancing, even when her feet are chopped off. The fairytale also acted as a loose basis for the South Korean horror film The Red Shoes (2005) about a cursed pair of shoes.

Michael Powell made a number of ventures into genre material. His other genre films are:– The Phantom Light (1935), a little-seen comedy-thriller set in a supposedly haunted lighthouse; as co-director of The Thief of Bagdad (1940); the afterlife fantasy A Matter of Life and Death/Stairway to Heaven (1946); the ballet fantasy portmanteau The Tales of Hoffmann (1951); the classic psycho film Peeping Tom (1960); and the children’s film The Boy Who Turned Yellow (1972).