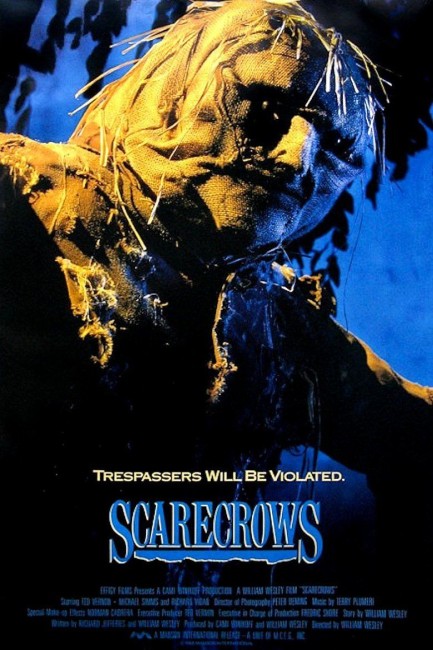 A group of armed robbers steal a $3.5 million payroll from a military base in San Diego and escape in a plane, taking the pilot and his daughter Kellie hostage. In mid-air, one of the gang, Bert, parachutes out, taking all the money with him. On the ground, Bert finds himself in a field near a farmhouse, surrounded by scarecrows and is killed. The others land the plane and gather in the farmhouse as they search for Bert. Bert then returns, saying nothing, only to abruptly attack and kill several of the group. When he is stopped, he is found to be dead and his body stuffed with the money. As the others try to escape, the scarecrows come to life and start hunting them.

Scarecrows is an interesting little-seen horror effort from the mid-80s era of video releases. It gained a very minor reputation, although internet reading reveals a number of people looking out for it today. It was very much a product of the 1980s horror genre and its fascination with zombies and novelty splatter effects, although manages to come up with some interesting variants on what other films of the day were serving up.

One of the more unusual aspects of the film is the heroes it offers up – not the usual group of cliche kids at a summer camp but a group of criminals who are on the run with a multi-million dollar heist and arguing amongst themselves. Director William Wesley creates an unusual atmosphere. There are the opening scenes with B.J. Turner escaping out of the plane with the money and finding himself in a field where he escapes from his pursuers in a pick-up truck he finds there, only for it to stop dead and he discover that it has no engine; he running through the field as the taunting voices of his pursuing comrades come closer, only to cut to his comrades who are puzzled at who he is talking to.

Things get even stranger when the other are gathered at the farmhouse and B.J. Turner returns, acting blank and saying nothing as he is grabbed and beaten up by the others who then open his coat to reveal a wound in his chest that has been filled with the missing money; where he shoves his fingers into another guy’s mouth, the fingers are then bitten off and spat out but crawl away; his head and then his wrist are hacked off with a machete and the body cut open to reveal it is packed with money.

In other scenes we see Richard Vidan being held down by the scarecrows, his wrist cut off with a saw, a bag placed over his head and then he stabbed through the mouth, before we see the severed hand being sewn onto one of the scarecrows. The film is filled with these striking images – of scarecrows with mouthfuls of teeth or wearing infra-red scopes.

One of the more unusual things about the film is that it never explains what the agency behind the scarecrows is, why they come to life or who/what they are. They just exist without explanation. The end credits make it clear that the scarecrows are the men of the Fowler family whose photo we see a couple of times in the farmhouse but beyond that nothing more is explained.

Director William Wesley never went on to follow Scarecrows up in any way, until his second film thirteen years later with Route 666 (2001).