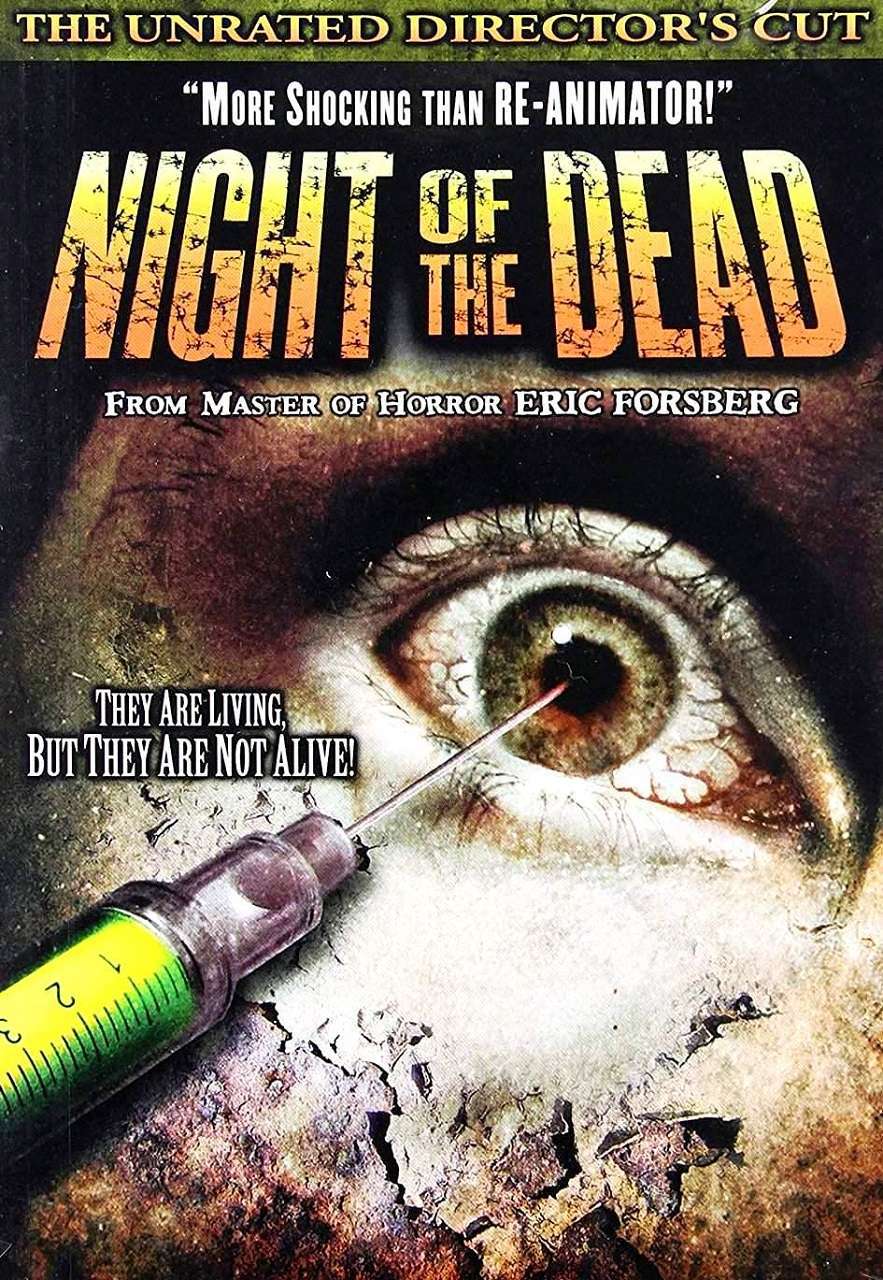 Dr Gabriel Schreklich, a German doctor working in the US, has perfected a serum that can reanimate dead tissue. His wife Schatzi and daughter Kristi are then killed in a car crash. One year later. A badly injured Mexican woman is rushed into Schreklich’s private clinic. Schreklich uses the serum to save the woman’s life and then that of her father after he is killed giving a massive blood transfusion to help his daughter. Schreklich also keeps the reanimated bodies of his wife and daughter locked up, although they are now zombies and have become dependant on being fed raw flesh. Also in the clinic is Anais, the pregnant wife of Schreklich’s assistant Peter Sturben. Anais comes across Schrecklich’s wife and daughter and releases them, unaware of why they are imprisoned. However, once released, Schatzi uses the serum to reanimate all of the dead in the hospital, unleashing an onslaught of hungry zombies.

Night of the Dead “Leben Tod” was the second film from Eric Forsberg, a relative newcomer on the independent genre scene. Eric Forsberg has worked in numerous capacities on film and tv but his career as a genre director took off with low-budget genre distributors The Asylum for whom he first directed Alien Abduction (2005), a fine low-budget UFO/alien abduction work with an ingenious twist ending, which was followed by the non-genre Sex Pot (2009), Mega Piranha (2010) and Clown (2019), as well as the screenplays for The Asylum’s Snakes on a Train (2006), 30,000 Leagues Under the Sea (2007), War of the Worlds 2: The Next Wave (2008), Age of the Hobbits (2012) and Troy: The Odyssey (2017), as well as Arachnoquake (2012) and Ghost Shark (2013) for other companies.

Eric Forsberg does a rather good job with Night of the Dead “Leben Tod”. Of all the above-listed zombie films, Night of the Dead “Leben Tod” is surely the most gore-drenched zombie film one has ever seen (Italian zombie films of the 1980s included). There is an amazingly blood-soaked and grim blood transfusion scene where we see Louis Graham in the middle of a hospital room physically pumping all the blood out of Paul Morquecho’s veins into a massive container. There is an equally nasty scene where Mexican daughter Scarlet Garcia wakes up from Schreklich’s operation and says “I’m hungry momma” and then turns and attacks her mother (Carla Valentine), ripping open her skull and eating her brains.

There is an unbelievably gory scene where we see Louis Graham and lab assistant David Reynolds battering a zombie’s head to pieces and the pieces of zombie still beating even when they have crushed it to mincemeat. Elsewhere we see a zombie burying its head in a nurse’s stomach to devour her intestines; and a shotgun surgery where a zombie’s limbs are blown off and its limbless torso then chained up and sawn apart. Even the standard food in the film has been made up to look queasy and unsettling – like the unidentified fowl that is served up for dinner but looks like a mutated bird, or the plate of ravioli that looks as though it is swimming in blood. This is one of the goriest films I have ever seen.

All of the cast are unknowns. Louis Graham does a fine job as the German doctor, who presumably leads to the peculiar Germanic subtitle (which translates as ‘live death’). The clipped Germanic certainty seems overdone at times but Louis Graham creates a considerable degree of sympathy for his misguided scientist, especially in the scene where the zombies, led by his wife, tear his head off as he pleads that he can still help them. There is a very good performance from Eric Forsberg’s seven-year-old daughter Lola as the zombie child. She has some wonderfully unsettling lines, all delivered in her little girl’s voice: “I love you daddy. Hold me daddy. When will you take me outside to play?” “Hello daddy, did you bring me another present? It’s not another cat is it?” she asks as Louis Graham enters the room and offers a bowl of blood and entrails to Lola who wolfs it down with a polite “Thank you, daddy.”

Eric Forsberg’s films seem a fascinating mixture of gore-drenched splatter and ingenious conceptual twist endings – he is like a mixture of George A. Romero and M. Night Shyamalan. There is also a clever and highly effective twist ending to Night of the Dead “Leben Tod”, where Eric Forsberg seems to be drawing from the recent Terry Schiavo controversy of which I will not say any more without giving the surprise away.