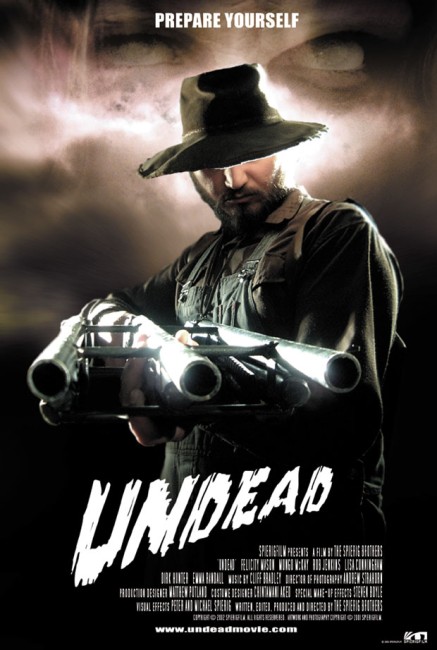 In the small Australian nowhere town of Berkeley, Rene Chapin has won a local beauty contest and is preparing to leave town. At the same time, her family farm is being repossessed by the bank. A meteorite shower duddenly strikes the town and the meteorites transform the dead into zombies. Fleeing from a zombie attack, Rene takes refuge at the home of the gun salesman Marion who is regarded as a paranoid crazy by locals because of his claims to have been abducted by aliens. As the zombies close in, Rene, Marion and various others, including pilot Wayne Whipple, his pregnant girlfriend Sallyanne and two police officers, take refuge in Marion’s survival shelter. Forced to emerge when Sallyanne starts to go into labour, they try to make an escape. However, they now find that a vast wall has been placed up around the town and that aliens are snatching up the survivors.

Undead is a low-budget, literally homemade film from the Queensland, Australia-based twin brothers Michael and Peter Spierig. Undead is a rarity – one of those films made as a genuine low-no budget feature without any kind of studio backing and made entirely for the love of it by people who are driven by a single-minded determination to break into the big time. There are only a few genre films like this that attain any success and usually they signal the presence of talents on their way to greater things – look at other examples like George A. Romero’s Night of the Living Dead (1968), Sam Raimi’s The Evil Dead (1981), Peter Jackson’s Bad Taste (1988), Robert Rodriguez’s El Mariachi (1993) and Kevin Smith’s Clerks. (1994) to name but a handful.

The Making Of featurette that accompanies the DVD of Undead is almost as fascinating to watch as the film itself is. Here you can see the extraordinary undertaking that the Spierig brothers embarked on to make the film in only 41 days with a budget that was stretched to the limit – the van that appears throughout the film also doubled as the one carrying recording equipment and frequently broke down, many of the props and pieces of sets had to be scrounged, the actors were never paid a salary, and many of the crew recount only getting something like two hours sleep a night for nearly a month and endangering their health to complete the film. Perhaps the most extraordinary revelation is the visual effects, which are superior to those in many studio-based feature films, and were all created by the brothers on home computers and laptops in their own bedrooms. If a film should be rated for dedication to the artistic goal way above and beyond the call of duty, then Undead should get a full five star rating.

Belying the guerrilla filmmaking tactics, Undead comes together on the screen with a considerable slickness and professionalism. If one did not know anything about the making of the film, it would be hard to distinguish Undead from a studio-produced feature. The film draws on a host of inspirations. If anything, it comes across as a conceptual collision between Peter Jackson’s zombie comedy Braindead/Deadalive (1992) – or perhaps even more so Jackson’s first film, the alien invasion splatter film Bad Taste – and the very strange Australian Outback film Incident at Raven’s Gate (1988) concerning alien visitations. This does lead to the biggest problem that one had with Undead – that it feels like two films, one a gore-drenched zombie movie with tongue considerably planted in cheek, and the other a puzzle film about alien abductions that takes itself seriously. The tone between these two aspects of the film is markedly different and never fully gels together or even explains much of what is happening until the very end.

The Spierig Brothers leap into zombie splatter with an unrestrained enthusiasm – torsos blown off from the bottom half of their body; a pair of legs staggering about with spinal column attached; a zombie thrown into the path of a plane propeller; holes blown through chests; fists punched through heads; severed limbs. The Spierig Brothers also mimic a lot of action movie poses – guns and spent shotgun shells being tossed through the air in slow-motion, people posing into the camera with guns – although this is leavened by a degree of eccentric humour – Mungo McKay leaping off a zombie’s back to flip over and impale himself upside down hanging from a door jamb by his boot spurs to shoot oncoming zombies, or making a handy escape by sliding along a trail of spilt beer.

There are times that the Spierig Brothers light upon the wackily cartoonish surrealism that runs through Peter Jackson’s splatter films – Mungo McKay in a dinghy punching out a horde of zombified fish; McKay blowing one zombie’s head off by impaling a can of shaken beer in its mouth and then puncturing the can; a zombie with a spade impaled in its head that gets the spade caught on a sign, only to tear the front of its face off.

It is often these appealingly absurd or way-out images that make the film – Felicity Mason and Lisa Cunningham trying to escape in the van as a beam of light from above attaches itself to Cunningham, dragging her against the van roof, causing the van itself to start lifting off the ground; the plane taking off and passing up over the wall to find all of the abducted floating in mid-air. The Spierig Brothers evoke a considerable atmosphere of strangeness during the middle of the film, with people being whisked up into the air in beams of light or the peculiar localised rainfalls that cause the people they drench to start steaming and the mysterious wall around the town.

On the minus side, the Spierig Brothers seem slightly less assured when it comes to directing actors. Most of the performances are fine but some tend to stray over into shrill one-note caricature – Dirk Hunter as an officiously deranged tin pot police officer and Emma Randall as his nervous rookie partner (who has improbably managed to pass a police force physical despite having a severe stress-induced asthmatic condition). On the other hand, there are also some very good performances, in particular Mungo McKay, who delivers everything in an unsmiling gravel monotone while keeping his face hidden under the brim of a bushman’s hat for much of the film.