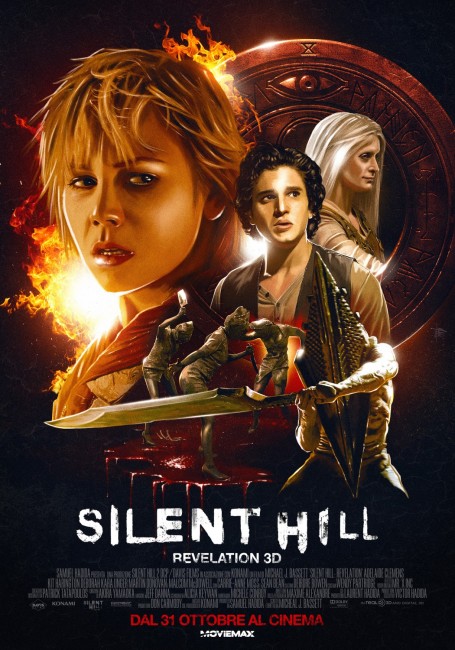 Eighteen year-old Heather Mason signs into a new school. She and her father have moved around and changed their identities multiple times since she was twelve. She is subject to a series of terrifying dreams and hallucinations. She is then followed by a man who reveals he is private detective Douglas Candrell and has been hired to find her. He explains that her real name is Sharon Da Silva and that people from Silent Hill want her back. He is killed immediately after. Heather/Sharon returns home to find her father abducted and ‘Come to Silent Hill’ written in blood on the wall. She and school friend Vincent Cooper drive to Silent Hill where she enters the otherworld. There she must confront terrifying figures and eventually her other half Alessa in order to rescue her father.

I had a good deal of liking for Silent Hill (2006). It was the film version of the popular horror videogame, which was released in 1999 and to which there have been eight follow-up games so far. Not many mainstream reviewers liked the Silent Hill film but it had an otherworldliness that created a good deal of unsettling and uncanny atmosphere. For a number of years, a Silent Hill 2 had been announced. Original director Christophe Gans bowed out and this was for a time taken over by Roger Avary, the first film’s co-writer, but this was put on hold after Avary’s jailing in 2008 on two counts of manslaughter following a drunk driving charge. Finally emerging here, the sequel has ended up in the hands of British director Michael J. Bassett. Bassett has been an up and rising genre name in the 00s with films such as the World War I horror Deathwatch (2002), the brutal wilderness survival film Wilderness (2006) and the Robert E. Howard adaptation Solomon Kane (2009).

Silent Hill: Revelation received some extremely bad reviews, although has its share of defenders. (It must also be said that that was the way the original film was received too). Michael J. Bassett has based the sequel on Silent Hill 3 (2003) and follows the plot and events of the game with a reasonable degree of faithfulness. Despite adherence to game canon, Silent Hill: Revelation is also no good. Bassett has settled for doing little more than revisiting the highlights of the first film. Thus this film’s main varieties of creatures are set-pieces involving old familiars such as the Pyramid Head and the mutant nurses.

To be fair, Bassett does offer up some new creatures, however these are weak and unimaginative creations – sinister clowns and butchers, zombified people in a mall turning into the camera to gurgle goo and Malcolm McDowell placing an amulet in his guts that transforms him. The most freakish creation that the film manages to produce is a scene where an imprisoned victim is slowly transformed into a mannequin and then her head torn off by a giant creature made up of mannequin parts that promptly incorporates her head into its piecemeal body.

Silent Hill: Revelation is also shot in the 3-D process. This is something aimed at extra box-office dollar that immediately drags the film down. The problem with this is that the first Silent Hill (and the game) derived its effect from the uncanny, in producing otherworldly creations that seemed downright freakish and unearthly. Silent Hill: Revelation unfortunately is a film arranged less around the generation of sinister mood than it is a series of pop-up shocks where the various creations appear, leer into the camera and/or do the equivalent of go ‘boo’ – it is Silent Hill reduced to pop-up Clive Barker.

On a basic plot level, dealing with the teenage Sharon makes for a logical mean of continuing the plot from the first film. On the face of it, the plot set-up about her going back to confront her Alessa half would seem a reasonable one filled with possibilities; in actuality, this only plays out in the pedestrian way. It is something that a better film could have done much with but Silent Hill: Revelation turns it into an uninteresting journey that unimaginatively and unatmospherically only revisits what went before. The writing that has gone into this is down around the level of a dull B horror film churned out with indifferent care.