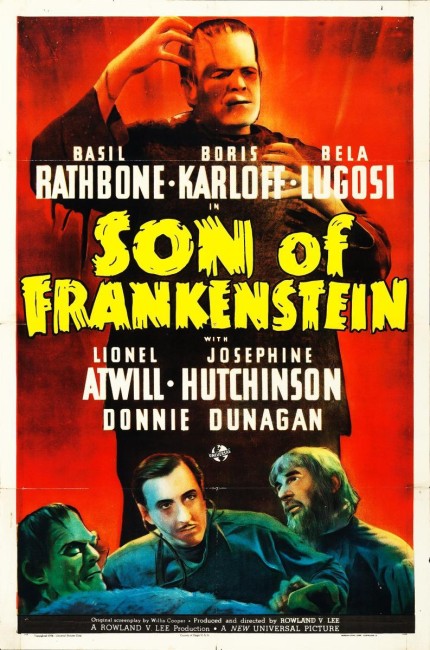 Wolf von Frankenstein, son of the infamous Baron, arrives in Europe from America, along with his wife and son, to inherit his father’s castle. The locals afford them a frosty welcome. The blacksmith Ygor, who has survived a hanging but has been left with a broken neck, shows Frankenstein the hidden crypt where the body of his father’s monster lies. At first abhorred but then fascinated, Frankenstein proceeds to revive the monster. He is then horrified to find that Ygor is sending the monster out to kill the jurors that condemned him to hang.

Son of Frankenstein was the third of Universal’s Frankenstein films and the last worthwhile entry before the series dissolved into interminable sequelitis. The previous two entries, Frankenstein (1931) and Bride of Frankenstein (1935), had both been big hits. These films were driven by the eccentric sense of humour of director James Whale and the audience-endearing pathos of Boris Karloff’s monster. Son of Frankenstein was the last of the films to star Boris Karloff and the last to afford the creature a trace of pity and humanity before it became a shuffling brute at the hands of Lon Chaney Jr, Bela Lugosi and Glenn Strange. The director’s chair this time around was inherited by Rowland V. Lee, a veteran from the silent era.

Son of Frankenstein set in place the formula that was strictly followed by all the subsequent sequels – some son/daughter/grandchild of the original Frankenstein happens upon the monster and after much anxiety invariably revives it; monster falls under someone’s evil spell and causes chaos; villagers raid the castle with burning torches; laboratory, Frankenstein and monster go up in flames. While the subsequent sequels followed this formula with utterly pedestrian regard, where the only novelty soon came to be in seeing the monster meeting other of Universal’s in-house Famous Monsters, Rowland V. Lee launches into Son of Frankenstein with an enormous degree of style.

The original Frankenstein had been strongly influenced by the stylised Expressionism of German silent films like The Cabinet of Dr Caligari (1919), although by the time of Bride this had been forgotten. Rowland V. Lee returns to the same Expressionist designs, filling the film with huge, looming sets lit in stark contrast – twisted staircases that leave giant slatted shadows on walls; a blasted bare landscape outside the castle filled with gnarled trees and lit up by lightning; a giant fireplace mounted with boars’ heads that stretches out into the room twelve feet above the heads of diners at the table.

The best part about the film are the characters. Especially good is Lionel Atwill as the wooden-armed Inspector Krogh – “One does not forget, Herr Baron, an arm torn out by the roots.” It is a performance that attains a delicious blend of tongue-in-cheek and the sinister, filled with memorable little character bits such as Atwill ratcheting his arm into position, swinging it behind his back and lighting a cigarette and a particularly memorable scene where he engages in a game of darts, sticking the darts into the arm to play.

Bela Lugosi gives one of the few decent performances of his career, using his thick accent to advantage amid much deep breathing. Although the part of the monster has become formulaic by now, Boris Karloff invests it with few of the last traces of sympathy it would have before becoming merely a hulking brute throughout the rest of the series. Basil Rathbone, who was then in between 20th Century Fox’s contemporary Sherlock Holmes films, gives a hammy and neurotically wound performance in the title role, although he is at least a much better actor than Colin Clive ever was in the preceding two films.

Director Rowland V. Lee made a number of films throughout his career, including versions of The Count of Monte Cristo (1934) and The Three Musketeers (1935). He made a bare handful of other forays into genre territory with The Return of Fu Manchu (1930), one of several films about the Chinese super-villain; the psycho-thriller Love from a Stranger (1937); and the Boris Karloff-Basil Rathbone historical horror Tower of London (1939).