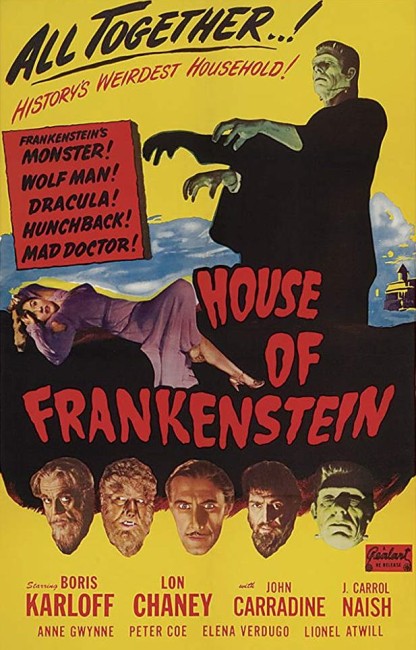 When a lightning bolt demolishes his cell in Neustadt Prison, Dr Niemann, a follower of Dr Frankenstein, makes an escape along with the loyal hunchback Daniel. They come across the travelling Chamber of Horrors sideshow of Professor Bruno Lampini. Niemann kills Lampini and assumes his place. Niemann pulls the stake from the skeleton of Count Dracula that Lampini exhibits and revives Dracula. He then uses Dracula to kill those who imprisoned him in the first place. In Visaria, Niemann discovers the frozen bodies of the wolfman Larry Talbot and the Frankenstein monster and revives them, plotting a hideous revenge where he will transplant their brains into the bodies of his enemies.

The Frankenstein monster travelled a long way in the thirteen years between Frankenstein (1931) and this, its sixth appearance in the Universal Frankenstein series. During that time, the monster made the descent from a sad and sympathetic creature to a dumb stumbling brute. By the time the monster appeared in House of Frankenstein, the performance had lost all the subtlety and pathos that Boris Karloff had originally invested it with to the point that the creature was merely being played by a stuntman.

The films had descended from finely crafted works of Gothic melodrama to formula works that replayed the same limited plots involving a new member of the Frankenstein family resurrecting the creature and the villagers burning the lab to the ground at the end. In the need to inject some creativity into the series, Universal had begun teaming their in-house monsters up with one another with the previous entry Frankenstein Meets the Wolf Man (1943).

House of Frankenstein was the second of the Universal monster bashes and is a better film than Frankenstein Meets the Wolf Man was. It has Erle C. Kenton at the helm, another of the pedestrian directors that Universal kept assigning to their monster sequels – although Kenton did make the great The Island of Lost Souls (1932). In his own crude way, Erle C. Kenton evinces a certain atmosphere. There is a fine opening in a great Gothic prison with Boris Karloff (originally the Frankenstein monster in the first three films and now playing the mad scientist) in a cell opposite a hunchback, both making an escape when a fortuitous lightning bolt improbably splits the building open, they then running through the rain to where, with equally contrived coincidence, they happen upon the travelling freak show of Professor Lampini, which just happens to be exhibiting the skeletal remains of Count Dracula.

The scenes with the revived Dracula are the best in the film – with Dracula sinisterly trying to hypnotise Anne Gwynne with his ring and in a nifty effect where we see his shadow transform into a bat to attack victims. There is also a marvellously sustained sequence that involves a coach chase at high speed, culminating in the rather touching image of Boris Karloff throwing Dracula’s coffin off and Dracula clawing to get inside as daylight comes.

The film almost has two different stories, one with Niemann reviving Dracula, and a second where Dracula drops out around the halfway point and another story with Niemann reviving the Frankenstein monster and the wolfman starts in. The second is far less interesting – once the monster and wolfman are revived, the script fails to give either anything to do, although Niemann does concoct the entertainingly lunatic revenge scheme of swapping the brains of either creature with those of his enemies. There is a certain tenderness to the scenes between J. Carrol Naish’s hunchback and Ilona Massey’s Gypsy but these are only to set the hunchback up as the person who, for contrived reasons, decides to wreck the experiment and bring the lab crashing down.

Nor is Dracula particularly well developed a character. Dracula has fallen a long way down too since Dracula (1931) – John Carradine’s incarnation is far from Bela Lugosi’s hissing, contemptuous incarnation of evil. Carradine (who would play Dracula a number of times on screen) makes an absurdly mannered Dracula – when Niemann revives him and issues a series of terms in return for his protecting him, and Dracula responds with a meek “Very well”, you are astounded at what a wimp this Dracula is. In fact, in the scenes pursuing Anne Gwynne, he seems more like a gentlemanly Southern courtier than a ravening vampire.