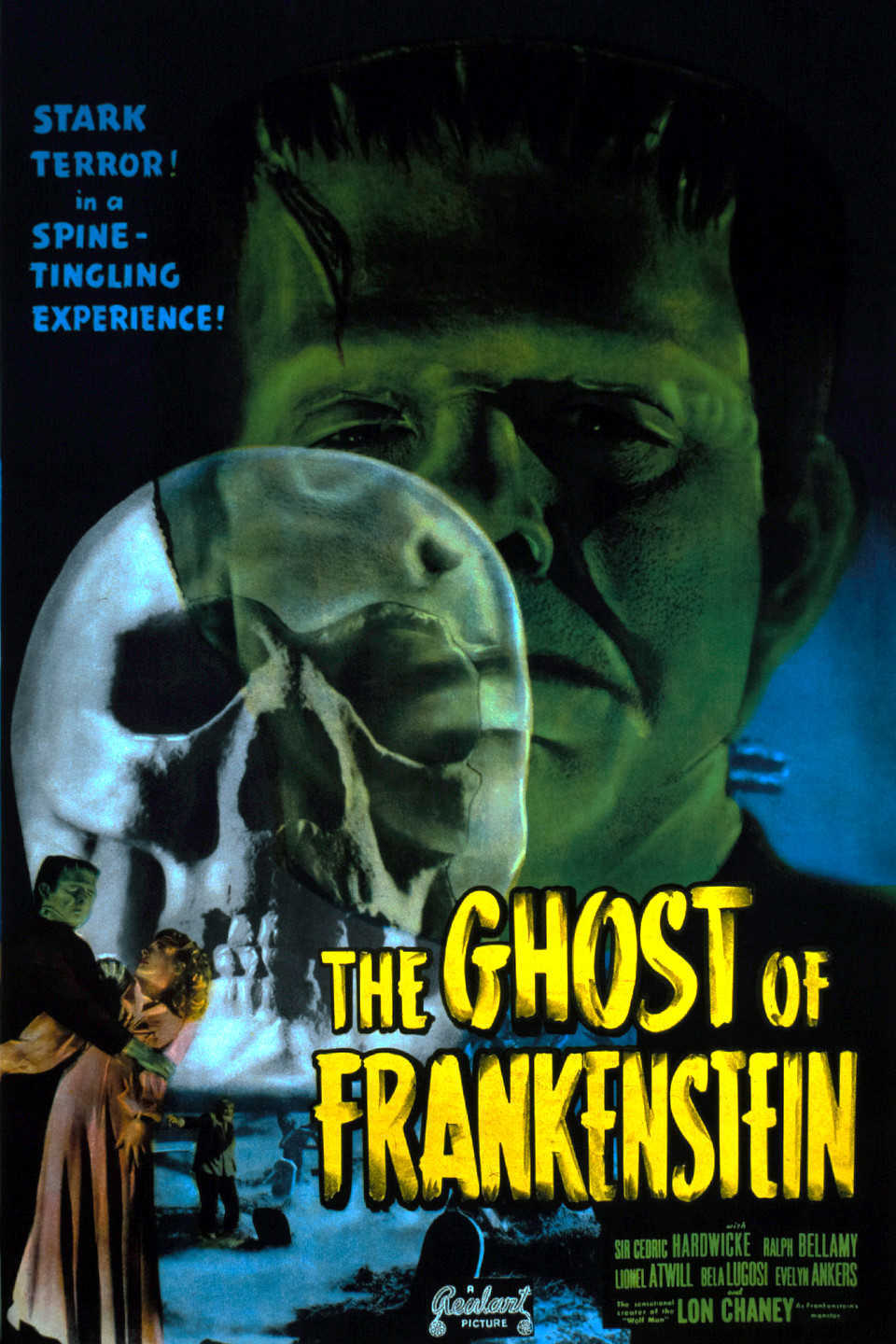 The villagers finally decide to free themselves of the Frankenstein menace and blow up Castle Frankenstein but this succeeds in reviving the monster. Ygor takes the monster to the village of Vasaria to find Frankenstein’s second son Ludwig who works as a psychiatrist. Ygor blackmails Ludwig with the threat of revealing family secrets into helping with the monster. Inspired by a vision of his father’s ghost, Ludwig decides he can cure the creature by replacing its criminal brain with a normal one. As Frankenstein prepares to transplant the brain of a colleague killed by the monster, Ygor persuades Frankenstein’s assistant into transplanting his brain instead so that he might escape his crippled body.

However, by the 1940s, the great age of Universal horror had fallen into a creative decline due to enforced Wartime economic cutbacks and conscription of talent. In lieu of creativity, Universal started to shuffle their classic monsters – Frankenstein, Dracula, the Wolf Man, the Invisible Man and the Mummy – around in an inferior series of sequels and team-ups with one another and eventually Abbott and Costello.

The Ghost of Frankenstein is a sad comedown after three excellent predecessors. Director Erle C. Kenton did make the great The Island of Lost Souls (1932) but he is no James Whale or even a Rowland V. Lee. The film, while having a fair budget, is competently made but is at most directed with pedestrian regard. Erle C. Kenton’s idea of shock effect is having the shadow of the monster appear on a wall – a far cry from the moment we first see the monster in Frankenstein. The lab sequence is notably wimpy, a few mere flickering Van der Graaf accelerators, a far remove from the grandiose lab sequences of the first two films.

Most of all, Lon Chaney Jr, cast as the monster, turns the character into a dumb, stumbling zombie. His performance holds the shell of the Boris Karloff characterisation but what Lon Chaney Jr lacks is anything approaching the pathos that Karloff invested the character with or the pity with which audiences greeted him.

Continuity between this and the foregoing films is getting ragged by now. Some effort is made to connect with Son of Frankenstein with the monster being revived from his death in the sulphur pit. On the other hand, the monster loses the ability to speak; Henry Frankenstein from the original has had his name changed to Heinrich; and the era is still the 1930/40s as it was in the first film, yet Frankenstein’s son is well into his fifties whereas the father was only just getting married in the original.

The plot is a strictly routine rehash of the elements of the series – another member of the Frankenstein family being persuaded to take up the profession; the rediscovery and revival of the monster; and a climax where villagers with burning torches putting paid to the abominable experiments. (One suspects that the reason Universal started creating monster team-ups with the next entry Frankenstein Meets the Wolf Man (1943) was the very limitedness of this formula. By comparison, Hammer’s Frankenstein series beginning with The Curse of Frankenstein (1957), in featuring the Baron rather than the monster as a continuing character, maintained a higher creative consistency throughout than the Universal series did).

The film’s one novel spin is having this Dr Frankenstein, in a blinding flash of ingenuity that one wonders why it never occured his other family members, decide to replace the monster’s brain with a normal one. Of course, the plot then throws in an absurdly melodramatic twist where Frankenstein’s lab assistant, for no clear or apparent reason, agrees to place Ygor’s brain inside the monster’s body without Frankenstein’s knowledge. Sir Cedric Hardwicke makes for a dull Frankenstein, although Bela Lugosi has fun in his second outing as Ygor. The film does feature a brief ghostly appearance from Frankenstein Senior in order to justify the title.