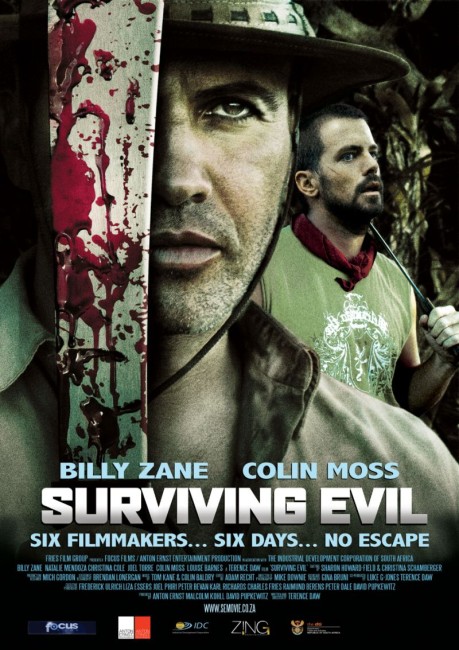 A film crew arrive on Mayaman Island in The Philippines for six days to shoot an episode of the reality tv series ‘Surviving the Wilderness’ starring Seb Beazley. As the crew settle in, they become aware of things rustling in the trees. They then discover dead body parts everywhere. According to the Filipino members of the crew, they are dealing with Aswang – vampire creatures that live in the trees. They learn that what the Aswang value most of all is the blood of a pregnant woman. At the same time, sound girl Phoebe Drake receives a positive result from a home pregnancy test kit.

Surviving Evil has low-budget horror filler written all over – the sort of film that is destined to fill the backwaters of cable programming and/or the $2 discount bin in the dvd store. It was a British-South African production (with coastal areas in South Africa doing a surprisingly convincing job of standing in for the Philippines). It is a feature-length writing/directing debut for director Terence Daw who has elsewhere only worked on various British tv series.

The lead-in to the film is exceedingly dull. The score causes you to switch off within moments of the film’s opening. We are constantly getting dramatically hyped music accompanying ordinary, uneventful shots of the camera passing through the jungle or along the beach, where the soundtrack is hyping up scenes of no event whatsoever with overwrought melodrama. While there is a competence to Surviving Evil on a technical level, there is nothing about it that seems in any way inspired.

There is also the fact that the menace of the show is kept shadowy and vague – for more than the first half of the film, we are given no clear idea what it is the group are dealing with. It is only after the one-hour point that the Aswang creatures emerge and start doing anything. In actuality, we get to the end of the film and they never get to do much at all.

Surviving Evil headlines Billy Zane – a born B-movie actor if there ever was one. Zane gives the film the good old school try and flexes his peculiar charisma without appearing to be making much effort – although rather than the hero the film bills him as he is killed off well before the end. The increasingly underrated British actress Christina Cole survives well in that position. The film also casts the part-Filipino actress Natalie Mendoza who made an astonishing debut in The Descent (2005). Alas, while Mendoza was a force of strength in that film, here she has simply been shuffled into a quiet and anonymous role with little opportunity to stand up and kick ass as she did in The Descent.