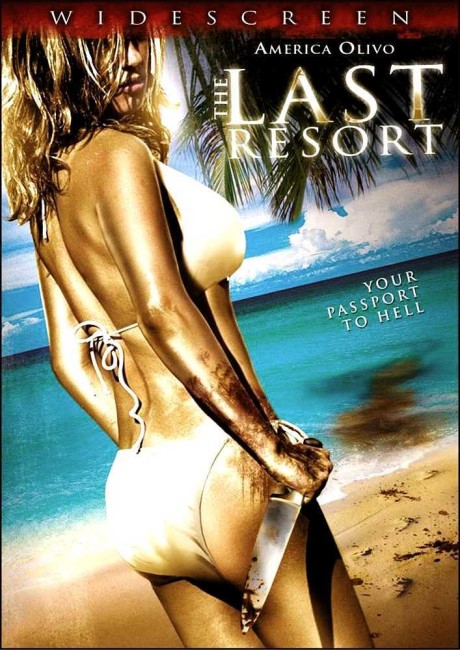 Five girlfriends travel to Mexico for Kathleen’s bachelorette party. Sophia hooks up with Rob in a bar and spends the night with him. In the morning, the other four girls decide to take a tour only for the tour operators to rob and abandon them in the desert after shooting Kathleen in the leg. As night falls, the girls seek refuge at a nearby resort that seems to be abandoned. Meanwhile, Sophia presses Rob and his friend Jeremy into searching for the girls but none of the locals is willing to talk about the resort outside of town.

The Last Resort was a directorial debut for Brandon Nutt. Nutt subsequently went on to direct Hijacked (2012) and produced a couple of other works including the horror film Bloodwork (2012).

At the outset, The Last Resort gives the impression that is trying to be another of the films that came out in the aftermath of Hostel (2005) – about a group of innocent tourists who stray into some area off the beaten track where they are tortured and killed. The film certainly seems to be shaping up that way as the girls are taken away by a couple of local guys and then robbed, shot at and left in the desert before making their way to an abandoned resort town. The opening scenes show the resort being used by people to kill and torture others, while it is latter is revealed to have been set up for the express purpose of the residents living free of moral restrictions and able to indulge their desire to inflict cruelties.

The Last Resort looks like a low-budget film made by people without much industry experience. The photography is flat, the editing doesn’t always flow. This becomes particularly evident during the early scenes and the attempts to create what is supposed to be a happening party vibe amongst half-a-dozen people at a bar (which it simply doesn’t). Despite the action being set in Mexico, the film was actually shot in California and Arizona desert towns.

The great disappointment of the film is that the horror element is all build-up but nothing actually happens. The girls get to the titular resort and wander about where something appears to affect their behaviour and make them act crazed and start fighting for a few scenes. However, the film is very vague about what is going on and even when it does arrive at these conflicts (hauntings? possessions?) they go nowhere. Brandon Nutt’s attempts to create atmosphere are rudimentary at best. The film is very vague about the agency haunting (?) the resort and you feel as though the entire second half needed a whole lot more substance.