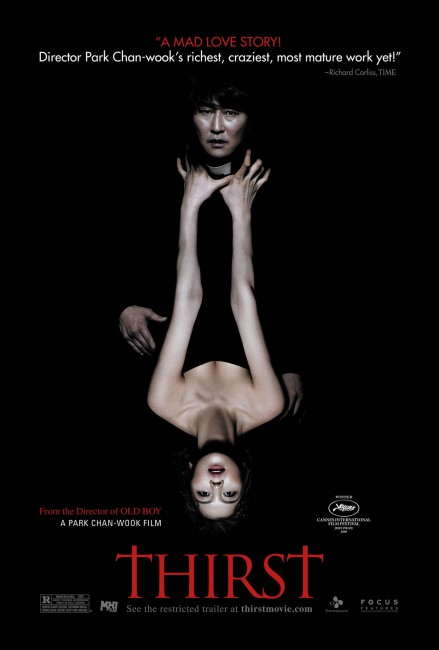 Sang-Hyun, a South Korean Catholic priest, volunteers to become a subject in an experiment where he is injected with a deadly virus and then receives a blood transfusion that cures him. He is the only one of 500 people to survive the experiment and returns home, regarded as having miraculous healing abilities by his parishioners. He is approached by Mrs Ra, who asks him to come and tend her ailing son, his childhood friend Kang-woo. Invited to their weekly mah-jong nights, Sang-Hyun is drawn to Tae-jun, Kang-woo’s wife, an orphan who was taken in by Mrs Ra. At the same time, symptoms of the disease keep returning and Sang-Hyun finds that he can only hold these back by drinking blood, which he takes from the patients he tends at the hospital. He also experiences difficulty controlling his lusts. He and Tae-jun start to meet in secrecy to conduct a sexual affair. No longer able to maintain his vows as a priest, he quits the order and moves into Mrs Ra’s spare room. Tae-jun tells Sang-Hyun how Kang-woo abuses her. Sang-Hyun plans a fishing trip for the three of them, during which he pushes Kang-woo overboard and drowns him. At the funeral, Mrs Ra collapses paralysed. Though they have the freedom to be together now, Sang-Hyun and Tae-jun are haunted by images of Kang-woo everywhere. During a fight, Sang-Hyun kills Tae-jun but then revives her as a vampire with some of his blood. Under the eye of the paralysed Mrs Ra, they continue their vampiric ways. Sang-Hyun, who has made scrupulous effort not to kill, becomes disturbed at seeing how willing to kill Tae-jun has now become.

South Korean director Park Chan-Wook established himself as a name to watch out for with his fifth film Oldboy (2003), a revenge drama that grabbed the throat in a brutal way and never let go. It has been tipped for an English-language remake for several years now. After the international acclaim enjoyed by Oldboy, some of Park’s earlier films like the thriller JSA: Joint Security Area (2000) and the revenge film Sympathy for Mr Vengeance (2002) started to become available. Park subsequently went onto other films like a segment of the horror anthology Three … Extremes (2004), Lady Vengeance (2005), the gonzo romantic comedy I’m a Cyborg, But That’s OK (2006), this venture into vampire cinema, his English-language debut with the psycho-thriller Stoker (2013), the exquisite The Handmaiden (2016) and the English-language spy mini-series The Little Drummer Girl (2018), as well as produced the science-fiction film Snowpiercer (2013).

Thirst is a much quieter and more subdued film than Oldboy – at least at the outset. Whereas Oldboy was raucously raw and in your face with gutsily uncompromised viscerality, the earlier scenes here following Song Kang-ho’s priest, his ministry and the mah-jong games are quiet and the festival audience waits patiently, clearly expecting them to open up at any moment. Park takes his time getting there. However, about the point that we see Song Kang-ho conducting the last rites (which is not a plenary indulgence, despite what the subtitling seems to think) and then furtively licking the dead person’s blood off his fingers, followed by him lying on the floor beneath a comatose patient’s bed with an IV tube of blood running down into his mouth, or where he returns from the mah-jong evening and tries to control his lust by beating his crotch with a ruler, we are drawn into the film’s spell.

Shortly before watching the film, I read Pride and Prejudice and Zombies (2009) by Seth Grahame-Smith, which amusingly rewrites Jane Austen but with the addition of zombie hordes. This was subsequently filmed as Pride and Prejudice and Zombies (2016). There is also a film entitled Romeo and Juliet vs the Living Dead (2009), which I have yet to see. (This satiric collation of highbrow literary works and monster movies became a burgeoning publishing trend in the years ahead).

Thirst is in essence the classic French literary work Therese Raquin (1867) by Emile Zola – but with the addition of vampires. There is a credit at the end “Inspired by Therese Raquin” but the debt of acknowledgement is far stronger than that. In fact, bar the addition of vampirism and the translation of the location to 21st Century South Korea, the plots of both Therese Raquin and Thirst are almost identical. In the book, Therese is an orphan who goes to stay with an aunt and marries her weak son. A childhood friend of the son comes to stay and begins an affair with Therese. The two conspire to kill the son but are haunted by guilt afterwards. The mother then has a stroke and remains paralysed only able to move one finger. During a games evening, she nearly gives everything away to the guests by spelling words out with her finger. Park Chan-wook is surprisingly faithful to the original, retaining details like the mother and adopted daughter managing a shop, the murder during a fishing trip and even the guilty couple seeing the dead man in their bedroom afterwards.

At times, Thirst has enough plot for two or three films. You could easily imagine Park Chan-wook building his own Twilight or True Blood saga out of the amount of story he has packed in here. The characters are required to travel some considerable distance. Kim Ok-vin, for example, has a character arc that takes her from abused innocent to cautiously engaging in a passionate affair before becoming a sultry half-mad vampire who relishes claiming victims.

The tone varies somewhat and there are periods where Park sidetracks off – the film could easily have done without the blackly comic scenes where the ghostly Shin Ha-gyun turns up everywhere, even including between the couple’s bodies as they sleep and try to have sex. During these scenes, Thirst seems to be heading off into some sort of J-horror ghost story black comedy. The main problem would seem to be that Park Chan-wook has been too faithful to the narrative of Therese Raquin when he could have cut some aspects, while the original story feels at times awkward being bent into becoming the vampire story that Park wants to tell.

Mostly though, Park Chan-wook holds the show together with admirable regard. There is an undeniable style to the film – something that is much cooler and more controlled than one has seen Park at before. There are times that Park opens up with a poetic grace – like the image of Song Kang-ho meeting Kim Ok-vin in the streets and silently lifting and placing her inside his shoes; or of the two of them hopping between roofs in pursuit of the other. The scene near the end where the mah-jong game explodes into violence after the mother gives them away is a marvellously sustained piece of control and release.

There is a constantly lurking sense of black humour. One of the finest parts of the film is the climactic scene where Song Kang-ho drives Kim Ok-vin and the mother out to an oceanside cliff in the middle of nowhere and waits for the sunrise that will kill them. It is his resolute determination to stay there against her panicked attempts to find cover – hiding in the trunk, which he just tears off, or under the car, which he simply drives forward – that makes the scene work with a memorable mix of tragedy and humour.

The love scenes between Song Kang-ho and Kim Ok-vin have a tenderness and urgency that has been considerably lacking in any mainstream film that one has seen in some time. The vampire story is not exactly a new one on the whole, but the two actors give it a life that make it work. If nothing else, the scenes have a pleasingly forbidden urgency and passion that makes welcome anathema to the chaste vampiric romance of Twilight (2008) and its ilk.

Thirst should not be confused with several other genre films with the same title, including the unrelated Australian medical vampire film Thirst (1979) and the plague outbreak film Thirst (1998).