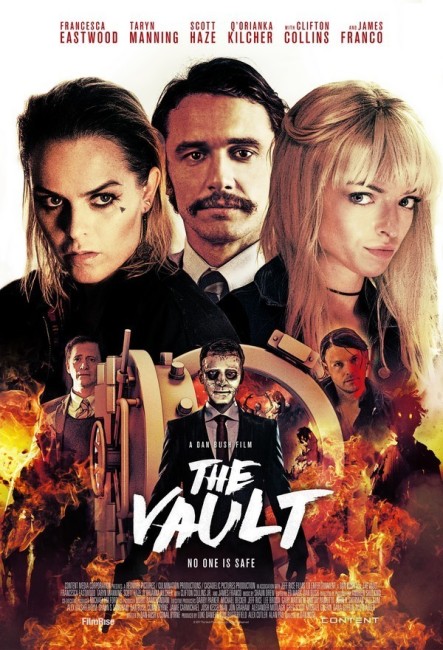 It is a regular work day at Centurion Trust bank. Without warning, a group of people enter dressed as firemen. They, along with two other people who are playing the parts of a prospective employee and an angry customer, pull guns and take everybody hostage. The gang is led by siblings Leah, Vee and Michael Dillon. The group are dissatisfied with the haul of money they get. To calm them down, assistant manager Ed Maas tells them how to circumvent security protocols that would alert the police and then suggests that they try the old vault down beneath the bank, which houses some six million dollars. However, in venturing down to break in to the vault, the group find that in doing so they have unleashed something supernatural.

The Vault comes from Dan Bush, a director who may not instantly come to the tip of the tongue. A few years earlier, Bush was one of the three directors who made the fine mass insanity outbreak film The Signal (2007). Bush also contributed to the multi-director Fight Fuck Pray (2008) and then solo directed the science-fiction film The Resurrection of William Zero (2014).

The Vault comes with a novelty premise – thieves conduct a bank robbery but find more than they bargained for when they open a vault housing something supernatural. The only other genre film that vaguely comes near this was From Dusk Till Dawn 2: Texas Blood Money (1999) but that was more about vampires holed up in a bank against police outside. The originality of the premise offers some promise as one sat down to watch.

Dan Bush does a commendable job setting the film up and builds a decent head of tension. The characters are drawn in economic strokes and the dialogue kept in terse exchanges. Bush does a more than effective job in depicting the sweaty tension during the hostage taking, the various attempts by the prisoners to escape and the group’s dealing with what it is inside the vault.

Of particular standout among the cast is Francesca Eastwood, the daughter of Clint Eastwood and Frances Farmer, (She also made a strong showing as the vigilante student crusader in the rape-revenge film M.F.A. (2017), a month after The Vault premiered). She plays with just the right degree of assertiveness, intelligence and brittleness that clearly pegs her as someone who is going to make a name in the near future.

The downside of The Vault is the eventual denouement. [PLOT SPOILERS]. The frustration of the film is that we see several possibly phantom figures appearing out of the vault but it never gives us any clear explanation of what they are. Even Q’Orianka Kilcher’s explanation of what happened back in 1982 makes things no clearer. The whole film exists as a build-up to what is in the vault and for the film to taper off into vagueness and lack of answers when it comes to revealing its hand is intensely frustrating.

[PLOT SPOILERS CONTINUE]. The other failing is the twist ending, which is de rigeur in horror these days. That said, the lame Character Who Wasn’t Really There All Along twist feels like a twist that belongs more in an episode of The Twilight Zone (1959-63) than it does a modern horror film.

Dan Bush next went on to direct the psychic powers film The Dark Red (2018).