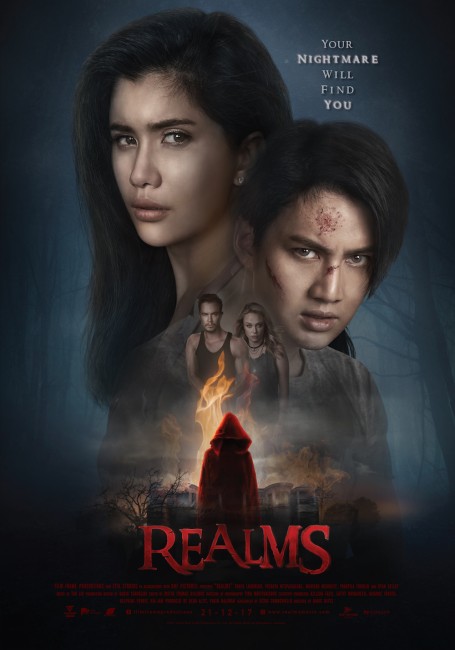 An American couple, Bobby and Jewel, conduct an armed bank robbery in Bangkok. They take best friends Winny and Earn hostage and force Chaow to drive them, fleeing in a high-speed car chase pursued by police. However, after escaping into the countryside, they crash. Getting out of the wrecked car, they take refuge at an abandoned house where Bobby and Jewel tie the others up as prisoners. However, the group soon come to discover that the house is haunted.

Realms was the third film from American director Daric Gates who had previously made the little-seen The Lady Masquerade (2009) and the ghost story The Appearing (2014).

With Realms, Daric Gates travels to Thailand to shoot. Quite why this is the case is not clear – the most logical conclusion is that it might simply be where the money to shoot came from as the film has Thai producers and features two Thai actors who have a reasonable local name value as the central characters during the latter half of the show. Certainly, Thailand appears to have become a cut-price locale in the last couple of years for low-budget English-language filmmakers such as James Cullen Bressick, Pearry Teo and The Asylum to travel.

Daric Gates gets a good opening scene off with American couple Ryan Kelley and Madison McKinley conducting a bank robbery in Bangkok (we are never privy to the reasons for such). Gates gets things going with good slam-bang high-speed car chase through the streets. Thereafter we arrive at the house in the countryside where Kelley, McKinley and their three hostages take refuge. Indeed, the two Americans largely disappear off stage (or are at least sidelined) and the bulk of the show gets played out by the Thai stars Praya Lundberg and Pitchaya Nitipaisakul.

The disappointment of the film is that soon after the arrival at the house, the energy of the opening dissipates and the show becomes no more than a regular haunted house film. Gates gets the odd jump off out of faces appearing out of the dark. Mostly though, Realms is the routine stuff that involves lots of running around the house and loud, amplified slams and bangs. Most of his attempts to make us jump are stock stuff – pop-up ghosts accompanied by loud snarls, rocking chairs moving of their own accord, ghostly music boxes, appearances from a spooky child. This becomes drawn out and tedious.

The film arrives at an abrupt conceptual reversal twist ending that does not make a lot of sense. This is something that has dogged the ghost story (and horror and sf films) since M. Night Shyamalan’s The Sixth Sense (1999) – namely that a regular end of the story is no longer enough but each film has to come with a left field twist that turns everything we have assumed about what is going on on its head.

[PLOT SPOILERS] Here we learn in a rather confusing twist that all five principals were engaged in a prior event where they were party to a conspiracy to poison Praya Lundberg’s husband during their wedding so she could be with poor waiter Pitchaya Nitipaisakul. For reasons not clear, this means that all five have been doomed to some kind of deathdream – see An Occurrence at Owl Creek Bridge (1961) – where they appear to be forced to replay various horrific scenarios in different roles each time. The film goes out with them all now on a bus as something sinister seems about to happen.