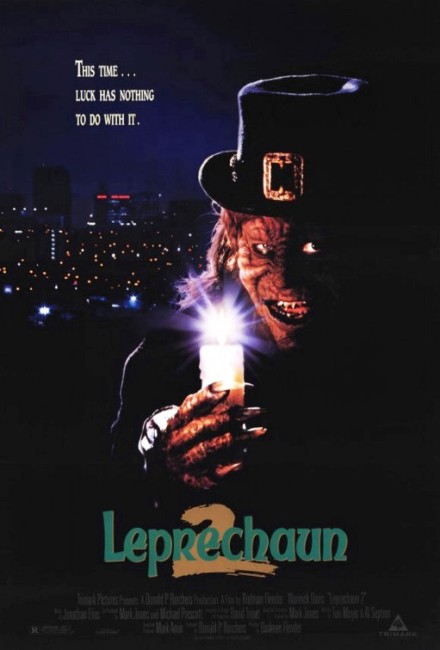 aka Leprechaun 2: The Bride of Leprechaun; One Wedding and Lots of Funerals

This was the second in the series of films that began with Leprechaun (1993). The Leprechaun films (see below for the other films in the series) were a clear attempt to create another Freddy Krueger-styled horror franchise – all set around 3’6″ Warwick Davis’s Leprechaun despatching teen victims in effects-heavy ways while cracking bad puns.

The first Leprechaun was savaged by everybody but proved to be a hit on video shelves. The news is that the second film has not improved any. It is made with a B-budget competence but comes across as tatty. The Leprechaun makeup is not particularly convincing, although Warwick Davis at least plays with a good deal of gusto. However, the one-liners are excruciating – “It’s finger-lickin’ good,” says the leprechaun after ripping off a victim’s finger. “Had your iron today,” says hero Charlie Heath as he despatches the leprechaun at the climax after suddenly discovering it has a vulnerability to wrought iron.

Most of the killings are extremely silly, particularly one scene where the leprechaun materialises in a Formula One racing car (which is simply an ordinary car painted over with leprechaun symbols) to run a victim down. Another scene with the leprechaun granting Sandy Baron three wishes and then materialising a pot of gold in his stomach looks silly but has a certain nastiness to it.

In one of the most ridiculous sequences, the leprechaun manifests an illusion of Shevonne Durkin to tempt Adam Biesk. There is a preposterousness to the scene where the Shevonne Durkin doppelganger takes her top off and is replaced by a body double – in so doing, going from an A-cup bra size to a D-cup – the film could not more obviously signal the substitution, which is then followed by an amusingly ridiculous scene where Biesk goes to place his head between her breasts and they suddenly become a twin set of spinning lawnmower blades.

One of the more amusing parts about Leprechaun 2 was when it was released on video in the UK and distributors tried to capitalise on that year’s hit romantic success Four Weddings and a Funeral (1994) by retitling it One Wedding and Lots of Funerals.

Director Rodman Flender had previously made the artificial insemination horror The Unborn (1991) and went onto make the possession comedy Idle Hands (1999). He had earlier worked in various capacities for Roger Corman’s Concorde-New Horizons. Most of Flender’s subsequent work has been in television and his only return to horror material has been the werewolf comedy Nature of the Beast (2007) and the zombie comedy Eat Brains Love (2019).