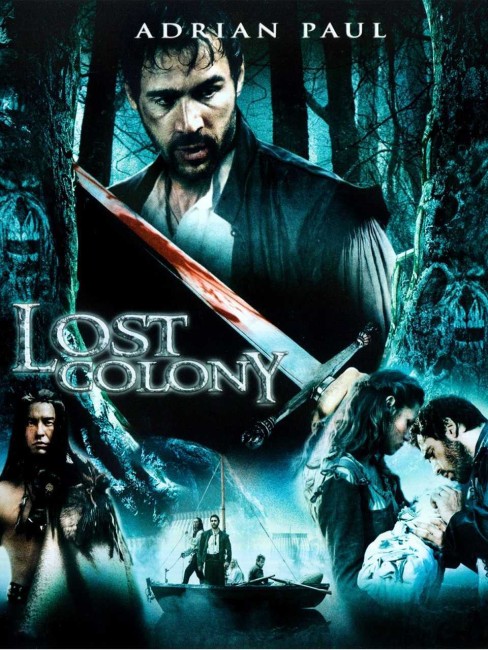 In 1587, a group of British colonists arrive to set up life at a fort that has been established on the island of Roanoke off the coast of Virginia. The men puzzle over the disappearance of the soldiers who were previously stationed there, only one of which is found, having hung himself. Ananias Dare is appointed the acting governor of the colony by his father-in-law. Shortly after, Ananias’s wife Eleanor gives birth to a baby daughter but is haunted by dreams of bad things about to happen to them. Soon the men start to be picked off by ghostly figures that appear out of the forest at night. Gradually, Ananias realises that they are dealing with wraiths that are the malevolent spirits of cursed Vikings.

The disappearance of the colonists at Roanoke is one of the great Unsolved Mysteries in American history. In 1585, a British colony was founded on Roanoke Island under the famous Sir Walter Raleigh and a fort was built. Ships containing 90 men, seventeen women and eleven children sailed from England and settled there in 1587 under governor John White. White returned to England and came back to Roanoke three years later to find the colony deserted. The only clue as to what had happened to them was the word ‘Croatoan’ carved into a tree, which may refer to a local Indian tribe or a nearby island.

Much theorising has occurred over the years as to what might have occurred. Credible theories maintain that the colonists integrated with the local Indian tribes and various pieces of archaeological evidence have been offered to support this. In 2005, a university research team began a massive project to match DNA from local Indians with the descendants of the original settlers to search for any connection.

Roanoke exerts an undeniable fascination in popular culture and has been referenced in works like FreakyLinks (2000), The X Files episode Terms of Endearment (1999), the Supernatural episode Croatoan (2006), the Sleepy Hollow episode John Doe (2013) and the films Vanishing on 7th Street (2010) and The Last Exorcism Part II (2013), almost all of which opt for some kind of supernatural explanation. The sole exception has been the mundane historical drama Roanoke: The Lost Colony (2007).

Wraiths of Roanoke is one treatment that takes a supernatural explanation (naturally). Its being made as a film for the Syfy Channel automatically gets one strike against it – the Syfy Channel is such a degenerated beast with its cut-price monster and disaster movies that it feels hard to generate any enthusiasm when their name turns up on any product. The film is produced by Mark L. Lester and directed by Matt Codd, two notable offenders among this particular niche. (See below for either’s credits).

You do have to commend Wraiths of Roanoke as it has done its basic historical research and conducts an approximation of the facts of what happened – the principal players (Ananias Dare, George Howe, governor John White, Ananias’s daughter Virginia who was the first European born in the New World) are all named and there is the inclusion of details such as instructions to carve a Maltese Cross into a tree to give evidence if they encountered trouble.

Less successful are the film’s approximation of the historical/social circumstances of the era. The settlers of Roanoke were all Puritans but religion and their cause of freedom is mentioned little in the film, except when it comes to the stock character of the priest (played by director/writer Terence H. Winkless, best known for the screenplay for The Howling (1980), among other works). Also the characters speak free of archaic colloquialism and tend to have more modern attitudes – the women have their hair uncovered, for one – than would have been accepted back in the era.

Unfortunately, Wraiths of Roanoke becomes less interesting when it introduces a horror element. The titular wraiths are simply figures that look like cut-price copies of the Dunwood dead in The Lord of the Rings: The Return of the King (2003) and never seem to do anything interesting other than hover about spectrally and invade the camp to kill people every so often. Certainly, Matt Codd proves woeful at generating any haunted atmosphere out of their appearances. On the plus side, we do get to see some moderately gory meltdowns, but the film holds little in the way of tension in anything other than a processed, rudimentary way.