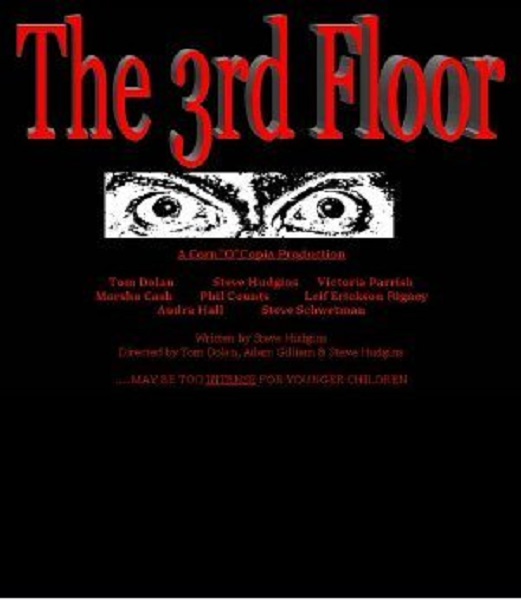 Paducah, Kentucky, 1999. Howard Baxter receives a phone call from his half-brother Buck telling him about an apartment that has just become available in the building where he lives. Howard and his wife Sandy rush to an interview and are able to obtain the lease. Soon after moving in on the fourth floor, Howard starts to hear noises and then voices calling his name from below them on the third floor. However, the building manager insists that the third floor has been closed off and unused for many years. Howard starts to investigate the building’s past as a hospital where the third floor was used to house the criminally insane. He learns about the four sadistic Sykes brothers who worked as warders and were sentenced to execution after it was found they were torturing and killing the inmates. A priest placed a curse that condemned the brothers’ souls to remain on the third floor and experience the same tortures they inflicted on others. Now the souls of the four brothers are seeking to find bodies to possess so they can be free from the third floor.

The 3rd Floor is an ingenue production that comes from three friends in Paducah, Kentucky – Tom Dolan, Adam Gilliam and Steve Hudgins. (Tom Dolan and Steve Hudgins also play the two brothers that are the central characters in the film, while Adam Gilliam can be found in a minor role as a security guard that throws the priest out of Steve Schwetman’s office).

The 3rd Floor has clearly been made on a low-budget and is self-financed. Dolan, Gilliam and Hudgins corral a cast and crew that seem to be more family and friends than industry professionals. This does lead to an undeniable amateurism about the production. The film has been shot on video, the photography often looks grainy and unlit, while the editing is ragged. You sort of have to take such a non-professional lack of polish as par for the course in watching the film. On its own terms, The 3rd Floor is a mix of the occasionally accomplished and disappointingly ordinary.

What I did like about The 3rd Floor is that the creative team expend a reasonable time building the characters out into credible and convincing people. Dolan and Hudgins play off each other well as the brothers and there are no bad movie acting gaffes. The sole exception among this might be a truly bizarre performance from Leif Erickson Rigney who plays throughout with a fake dreadfully posh British accent and a determination to be as eccentric as possible. By the time the film gets to the scenes with Rigney bursting in to peep on his sister?/wife? (Audra Hall) in the shower, having conversations with his toy pig and demanding that a sandwich be delivered to him while he sits in the bath fully clothed, The 3rd Floor enters (for a brief time) into quite demented WTF territory.

There are some nice pieces of writing – snide throwaway lines like “You look awful – you look like that Nick Nolte mugshot”, or an amusing speech where Steve Hudgins tells of a dream where he was banging a supermodel whose face turned into that of the in-bred child from Deliverance (1972). Tom Dolan has a particularly good monologue where he explains to Victoria Parrish how Buck is the black sheep of the family, born out of an affair that his father had, and how Buck always feels indebted to him for saving him from a near-fatal beating by his drunken father. Indeed, The 3rd Floor tends to work best during its soliloquies where the respective actors manage to hold attention through their telling – there is another fine speech later in the piece from the priest (Philip Counts) about the story behind the third floor.

The minus side of this is that with the focus placed on character development, the horror elements are slow to develop. Two-thirds of the film is over before we get past Tom Dolan’s investigation and the menace from the third floor starts to emerge properly, during which time not a great deal happens. A contemporary teen horror film, for instance, would keep peppering the first half with numerous pop-up shocks.

The amateurish photography also precludes the creation of decent atmosphere – all that we see of the third floor, for instance, is only represented by what is quite evidently a black cloth placed over the exit from the lift. The first possession scene where we see Marsha Cash standing in the lobby with her back to the camera does not work – aside from the fact that it feels too much borrowed from the climactic scene of The Blair Witch Project (1999) – because the photography fails to invest the scene with much in the way of conviction or suspense. The last few minutes do perk up with various zombie/possessions and a strong scene with the remaining principals facing off against each other in the apartment.