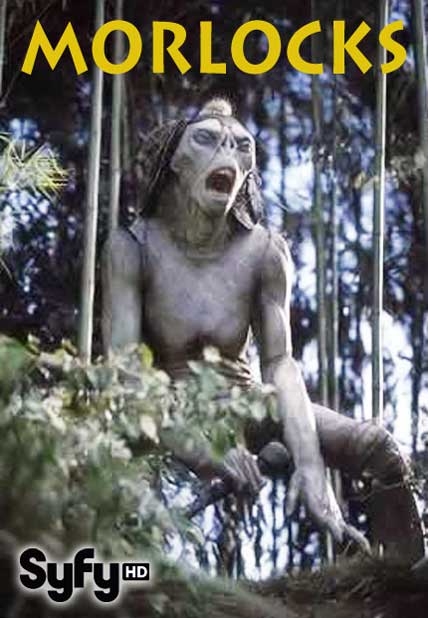 Science-fiction writer James Radnor is co-opted by his ex-wife Angela to return to the project he once headed. The purpose of the project was to build The Latch, a device that opens up a doorway through time. Radnor quit after several of his team went missing in the future, however the project has been reopened under the military control of Colonel Wichita. They face a problem in that The Latch has been lost on the other side of the rift and Radnor is needed to retrieve it. Radnor and a platoon of soldiers venture through the doorway to a destroyed future. There they then come under attack by Morlocks – the bestial mutated remnants of humanity. As they try to survive, Colonel Wichita becomes increasingly reckless in his attempts to capture a Morlock alive, believing that its DNA has the ability to heal his dying son.

Morlocks is another film produced for the Syfy Channel by UFO Films, the production company headed by Phillip Roth, best known as director of B-budget fare like Prototype X29A/Prototype (1992), Apex (1994), Digital Man (1995), Darkdrive (1996), Total Reality (1997) and New Alcatraz (2002). As a production company, UFO regularly produce low-budget monster and science-fiction shows. (See below for UFO’s other films). Director Matt Codd, usually a conceptual artist on other more high-profile productions, had previously directed other Syfy and UFO films with the likes of Epoch (2000), Shark Hunter (2001), Dragon Dynasty (2006), Wraiths of Roanoke (2007) and Super Eruption (2011).

This leads one to expect that Morlocks is another version of The Time Machine, which could easily be so given that the H.G. Wells novel is in public domain. However, this is not the case at all and at most Morlocks borrows a couple of things from H.G. Wells – the title concept of the future descendents of humanity as monstrous beast creatures, while there is also mention of the Eloi Project (the Eloi being the other half of humanity who lived aboveground in a placid untroubled world where all their needs were served by the Morlocks).

On the other hand, there is no Time Machine or traveller – rather than a machine we have a portal that extends from the present-day to the future; and while we do get its inventor, he is not a solo venturer but supported by a platoon of soldiers. Missing also is the first half of the book about his discovery of the time machine and journey into the future. Also, as we find towards the end, the film is not set in the far-flung future but only a few years hence.

In essence, the film has only taken the Morlocks from H.G. Wells and grafted them onto the formula of the standard Syfy Channel monster movie. Indeed, when David Hewlett turns up, you feel like the show resembles more an episode of his tv series Stargate Atlantis (2004-9) than it does the H.G. Wells novel.

Morlocks is in all ways a typically cheap Syfy Channel monster movie, of which they churn them out in great quantity irregardless of quality. Most of the show has no higher ambition than offering up plentiful cheaply conducted scenes of people running around shooting at monsters. The Morlocks are created via the typically tatty digital effects that are regularly found in these Syfy Channel films. Particularly shoddy and impoverished are the scenes where the Morlocks attack a tank and down a helicopter at the climax, which look like no more than the graphics for a low-resolution 1990s computer game.