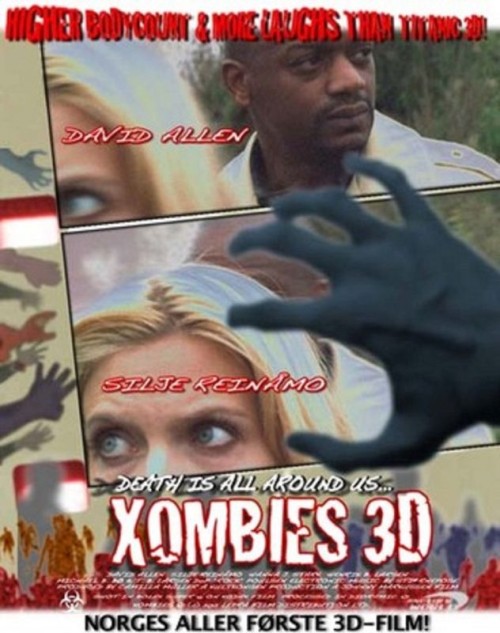 The world has been overrun by zombies. Edwige attempts to survive with her prisoner Franco. Later they are joined by a young mute girl that Edwige previously treated while as a field medic. They are pursued by George and Joe, two psychopathic thugs with guns who enjoy killing everything in their way. Various cultists and others attempt to abduct them.

Xombies 3D is made by Johnny Markussen, a Norwegian director who had previously only made one film, God (2002), about which I have found very little, except for the fact that one local critic called it the worst Norwegian film ever made.

There have been a great many low-budget, gore-drenched and/or gonzo, tongue-in-cheek zombie films made in the latter half of the 00s, following the successes of films like 28 Days Later (2002), Dawn of the Dead (2004) and Shaun of the Dead (2004). Most of these are independently made and/or low budget efforts that seem made more by enthusiasts of the genre than necessarily by filmmakers exploiting a trend. Amid these cheap zombie films, Xombies 3D emerges as one of the worst of the genre.

One of the two things that damages Xombies 3D in a big way is Johnny Markussen’s decision to shoot substantial amounts of it in terms of green screen and cheap digital overlays. There appear to be no actual gore effects, only ones that have been digitally added in post-production. Unfortunately, these effects are extremely cheap and come out looking more like the cutout animations that Terry Gilliam used to perform for Monty Python’s Flying Circus (1969-74). The cheapness extends to most other areas of the film – the sound recording is of poor quality with the dialogue frequently being overrun and drowned out by the sound effects.

Xombies 3D is a film that seems to have been made without anything approaching directorial style or a plot, nothing it seems other than the makers’ enthusiasm for the zombie genre. There is occasionally some worthwhile writing to Edwige’s voiceovers but this is killed off by the voicing where the actress gives the appearance that she had no interest in what she was saying. There is an entire randomness to the plot – a mute character known only as The Girl (Hanna Jenny Stark) joins the party after just jumping aboard a train with them. We find that Edwige treated her while working as a field medic – this is never even referred to again, nor for that matter Edwige’s medical background. The Girl is also abducted by a cult at one point but who they are and why they do so is never explained. There is an appearance of a hideously aged old man towards the end who drags the group into some type of vague scientific experimentation. The character is surrounded by Nazi regalia but again there is no explanation of who this is and what they are attempting to do. The film’s seeming randomness and lack of coherence on any plot level dooms it.

The film also has the oddity of naming its characters in tribute to Jesus Franco – a heroine called Edwige in reference to his regular actress Edwige Fenech and a male lead Franco. The film also has an opening disclaimer that states that it was produced between 2006 and 2011 and before the events of 22/09/11 when right wing extremist Anders Behring Breivik set off bombs and shot 69 people on Utøya Island in Norway. The film stresses that though events in the film are similar, no connection should be made between the two. It seems an odd case of a film tiptoeing around and emphasising its sensitivity when there is no real connection between the events and what it depicts.

Johnny Markussen made a follow-up with Absolute Zombies (2015).