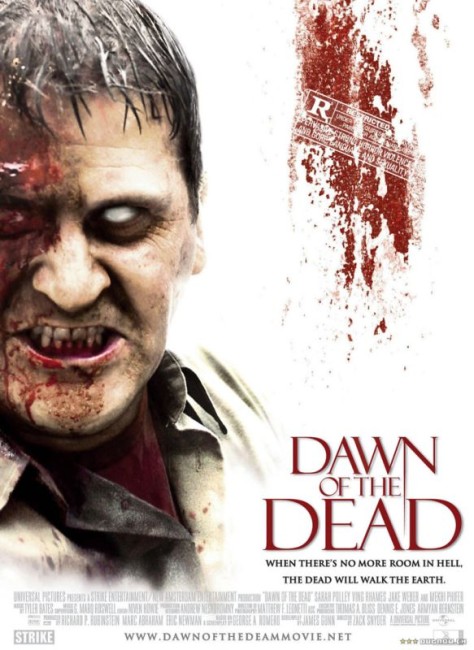 Ana, a nurse in Milwaukee, Wisconsin, is abruptly woken one morning as a neighbouring girl Vivian comes into her and her husband Luis’s bedroom. Vivian then suddenly bites into Luis’s neck, after which he gets back up equally violently crazed and attempts to attack Ana. Ana flees but sees that the whole city around her is in anarchy as people everywhere turn on and attack others, trying to devour their flesh. After crashing, she comes across a group of others and they take refuge inside the Crossroads Mall. The mall’s three security guards, led by the redneck C.J., reluctantly allow them in. As they barricade themselves in, hundreds of zombies gather outside the doors, trying to force their way in. Inside, their survival is threatened by those among the group who become infected by zombie bites and conflict over their best means of survival.

Dawn of the Dead is a remake of George Romero’s cult classic zombie film Dawn of the Dead (1978). Dawn of the Dead 1978 was actually the second entry in a trilogy of zombie films that George Romero began with Night of the Living Dead (1968). Night of the Living Dead revolutionized the horror film – it was the first independently made horror film to become a mass success, it broke down a huge number of taboo barriers and clichés with grim regard, it came loaded with looming metaphors of social collapse, as well as produced a great many imitators. Dawn of the Dead was equally successful, becoming a midnight cult classic, being groundbreaking in its gore effects and was muchly imitated. Romero made a third entry, the greatly underrated Day of the Dead (1985), but this was not a success and for the next two decades he appeared to abandon attempts to make a fourth Dead film.

Director Zack Snyder certainly pays appropriate homage to the original Dawn of the Dead. Most of the original cast make cameos – Ken Foree turns up as a preacher on the tv, Scott H. Reininger as a besieged general, and Tom Savini, the makeup effects man from the original who also played the biker leader, turns up as a sheriff (who would appear to be a close cousin to the Southern sheriff’s posse that appeared at the end of Night), and the mall’s clothing outlet chain is named after actress Gaylen Ross. While one cannot deny that the filmmakers here and in these abovementioned films are horror fans, whether any of these remakes are improvements over their originals is a highly debatable question. Indeed, what these remakes seem more than anything is unnecessary.

Dawn of the Dead 2004 was called a ‘reimagining’ of the original, whatever that may mean. There are certainly many points of difference between the two. With Dawn of the Dead 1979, the gore was so extreme that George Romero had to release the film independently and unrated; by contrast, Dawn of the Dead 2004 comes backed by a major studio (Universal) and released with MPAA approval. On the plus side, the studio backing and MPAA approval has not censored the gore as much as one expected that it would – there is a reasonable degree of blood spilt, objects impaled through heads, heads and body parts severed (which may well say something positive about how the ground rules about acceptable levels of gore in mainstream cinema has shifted since 1979). On the other hand, Dawn of the Dead 2004 is not as memorably gory as the original – certainly it is a hard stretch of the imagination to think that audiences are going to go out of this version talking about the screwdriver in the ear scene, the helicopter blade in the head, the intestine devouring scene etc. There are no similar standout gore set-pieces here. Moreover, almost all suggestion of the zombies devouring their victims has been eliminated – they never seem to be doing anything more than biting victims.

Certainly, some aspects of the original have been improved. Whereas George Romero made his version on only a $2 million budget, cutting his costs by shooting after hours in a Pittsburgh mall, this version has a $28 million budget and recognizable name actors. The bigger budget has also allowed the remake to envision the social apocalypse on a much wider scale – the zombies outside the mall number in the thousands and there are CGI-added shots of the city burning.

More importantly, the remake has substantially changed the basic plot of the original. It ups the complement of characters from four to fifteen, nearly four times the original number. Alas, these are never particularly well characterized – they are the standard crosscut of characters that inhabit survivalist dramas – the treacherously self-interested yuppie, the redneck, the tough but honourable heroic type, the elderly man, the father who must sacrifice his life, the pregnant woman, the blonde bimbo. The remake also dispenses with the bikers that invade the mall, although takes the more interesting step of internalising the conflict within the group – making it initially a fight between the group and three security guards led by the redneck Michael Kelly, who seems more interested in maintaining his own authority than considering practicality or group survival. The zombies are also much more mobile – they can run rather than blindly stumble about. (Zack Snyder says the reason for this was because he wanted to avoid the slapstick scenes that Romero put his zombies through in the original).

What is also noticeable is that Dawn of the Dead 2004 dispenses entirely with the satire of the original. Romero’s films of the 1970s had a startling level of social commentary to them. Dawn of the Dead 1978 was a remarkable parable about materialism and the consumer society – how the mall became a materialist idyll for the survivors with the zombies amusingly seen as mindless consumers operating by basic instinct. All of that has been excised by the time of the remake, which is now only a survivalist action/gore film with no intended level of social metaphor.

Indeed, when Dawn of the Dead 2004 does the thing about the survivors running about the mall and enjoying the mini-utopia, all it does is throw up a montage of cute scenes – people riding about on bikes, watching dvds, shooting basketball hoops in the main concourse, getting their hair done, having sex on a walking machine – without any trace of irony. When George Romero conducted such a montage, he was ironically reflecting on the meaningless of mall culture – people taking money when there is nowhere left to spend it, threading their way through empty bank queues. The irony of Zack Synder’s montage is that such scenes unintentionally buy into the very utopian image of the consumer society that George Romero was trying to satirise. There are other times that the remake tries to throw in original ideas – particularly the zombie baby – that promptly go nowhere – the film quickly kills it off and squanders any interesting concepts the idea may have raised.

There are occasional moments to Dawn of the Dead 2004 – Zack Snyder improvises an amusing series of exchanges between the group and the man trapped on the roof of the gunstore; and there is a decent opening where Sarah Polley’s husband is abruptly bitten by the zombie girl and she must flee, her flight gradually taking in an awareness of the apocalypse as the camera pulls back to an aerial shot crossing the burning city, showing vehicles appearing and colliding. Zack Snyder builds the film up to a reasonably intensive all-out climax in the last 15 minutes as the group make their break out of the mall and away to safety. However, compared to the memorable to-the-death survivalist battle that George Romero’s survivors engaged in, the scenes here seem lacking. While there is a moderate intensity, there is never anything that has you on the edge of the seat in suspense. In the end, Dawn of the Dead 2004 emerges as a remake that revisits the original but does so without having anything to add or even anything to say about it all.