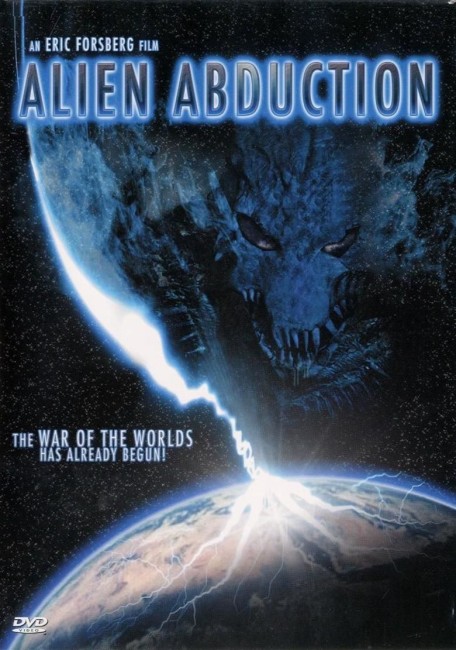 Two couples, Jean and her boyfriend Todd, along with Britney and her boyfriend Bud, are camping in the mountains when Jean thinks she captures evidence of a UFO on her video camera. As night comes, they are stalked by a monster and then captured. Jean comes around in a hospital and gradually learns that it is a military facility to rehabilitate people who have been abducted by aliens. Her captors drug and interrogate her about her experience but she refuses to cooperate. She manages to sneak into a neighbouring ward where she discovers that her friends have all been reduced to vegetables. With the aid of someone inside the organisation, she attempts to make an escape and get the truth of what is happening to the outside world. In doing so, Jean however discovers that all is not as it appears to be.

At first glance, going by the title, you feel that Alien Abduction has come along just a few years too late to jump on the fad for UFO conspiracy/alien abduction films that were at their peak circa 1995-9 after the massive success of tv’s The X Files (1993-2002, 2016-8). Indeed, Alien Abduction feels exactly like an X Files-inspired alien abduction film made subsequent to the success of The Blair Witch Project (1999) – the film starts with a group of campers lost in the woods and stalked by something unseen, while much of the film involves a girl running around filming things with a video camera. However, as soon becomes apparent, Eric Forsberg has considerably more ingenuity up his sleeve that making a mere X Files copy.

The bulk of the film is set in a secret government asylum that is ostensibly for the integration of alien abductees back into the community. Here Eric Forsberg throws in a number of disconcerting scenes – like when Megan Lee Ethridge breaks into another part of the asylum and is confronted by various severely mentally vegetated abductees banging their heads against the wall, making ungainly movements or drooling in the rundown hallways, and a vignette in one room where a nurse gleefully jams a huge drill device into a patient’s head, before she discovers that her friends have become vegetables too.

One gets the impression that Eric Forsberg has a fear of hospitals – both Alien Abduction and Night of the Dead “Leben Tod” are set in sinister hospitals where unorthodox and out-of-control experiments are being conducted. Here Forsberg unnervingly taps into a fear of asylums – of physically coerced drug and ECT treatment, the doped-out patients sitting in the common room like zombies, the infuriatingly banal piped music that is intended to soothe, the authoritarian (almost Kafka-esque) requests for the heroine to cooperate for her own good. With the constant sinister military presence in the background, the film does a rather effective job of creating an atmosphere of mystery, paranoia and dis-ease during these scenes. Forsberg gets a strong and intelligent performance from his lead actress Megan Lee Ethridge who also demonstrates a more than capable ability to kick ass in the fight scenes.

Eric Forsberg also loves gore effects. Alien Abduction is not as extreme in this regard as Forsberg’s subsequent Night of the Dead “Leben Tod”, which is possibly the goriest film made in at least the last decade. However, there is an extremely gory scene where Megan Lee Ethridge jams a drill into a nurse’s skull and splatters blood and pieces of brain everywhere as the contents of her head are sucked out. There is an entertaining scene (if one that is not entirely 100% convincing effects-wise) where a janitor’s head swells up and explodes to release a slug. A few alien monsters also turn up (although how they relate to the slug aliens we see elsewhere throughout the film is not clear). The monsters look reasonably effective in the few glimpses we get of their full body appearance with blue light coming out of their eyes, although the close-ups of their claws tend to the rubbery.

I am starting to like Eric Forsberg’s films, at least going by the two I have seen so far. Forsberg loves splatter effects – not the absurdly unserious popcorn splatter of films like The Evil Dead (1981) or Braindead/Deadalive (1992), but the more grim and serious bloodletting in the vein of George Romero circa Dawn of the Dead (1978) and Day of the Dead (1985). Like Romero, Eric Forsberg is an intellectual splatter movie director (if such is not a contradiction of terms). Romero leavens his splatter effects with startling social commentary; Forsberg by contrast is more like a Philip K. Dick or an M. Night Shyamalan – he constructs splatter films that come with remarkable twist endings that overturn everything that we have assumed throughout the course of the film.

Up until its last ten minutes, Alien Abduction could have been an average, if reasonably well made, UFO abduction/conspiracy film. At this point however, Eric Forsberg tosses in a completely unexpected left field twist that throws everything that has been assumed about the film throughout completely on its head. [PLOT SPOILERS] What we have assumed about being in a psychiatric hospital for returned alien abductees is overturned and it shown that Megan Lee Ethridge is in actuality an alien body snatcher and that the hospital is set up to induct the pod people into their human host bodies; that she is not experiencing abduction, rather that a rogue alien scientist has deliberately blanked out memory of her true alien nature. It is like a mirror-reversed version of Invasion of the Body Snatchers (1956) – where rather than a human waking up to discover all the people around them have been replaced by pod people, a pod person wakes up to realise that they are not a human after all. The ingenuity of this twist reversal is audacious. Both Alien Abduction and Night of the Dead “Leben Tod” leave me with great anticipation to see what Eric Forsberg is going to make next.