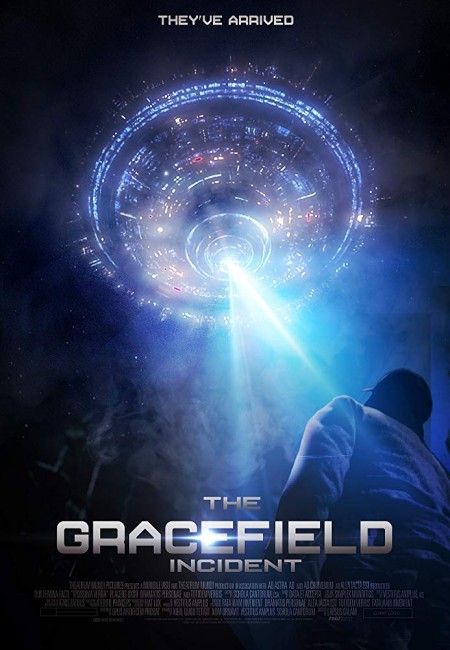 Mathew Donovan and his pregnant wife Jessica are driving when they are hit by an oncoming truck. Ten months later, Matt has rebuilt the eye he lost with a video camera. He joins four friends, two other couples, as they leave Montreal for a weekend and head to Matt’s boss’s cabin near the town of Gracefield. On the news, there are reports of a satellite being struck by an unidentified object. As they are partying that night, they see a meteorite come down in the woods nearby. They go in search where Matt finds a mysterious stone. At the same time, alien beings appear and snatch various members of the group.

The Gracefield Incident is a directorial debut from Mathieu Ratthe, a Montreal-based filmmaker who had previously been making short films for over a decade, He also plays the lead character in the film – the one with the video camera eye. The title refers to a real-life town in Quebec.

The UFO Found Footage film is a theme that has emerged in the last few years with films such as The Fourth Kind (2009), Alien Origin (2012), Area 51 (2015), The Encounter (2015), The Phoenix Incident (2015) and Phoenix Forgotten (2017), as well as the Slumber Party Alien Abduction episode of V/H/S/2 (2013). Most of these are no more than variants on The Blair Witch Project (1999) with people running through the woods with video cameras being stalked by aliens instead of haunted happenings.

For much of the film, The Gracefield Incident is the tiresome stuff of the Found Footage UFO film and seems to involve a good deal of blurry camerawork with people fleeing an unseen menace and dialogue that never consists of anything more than “run” or “shit, we’ve got to get out of here.”

On the other hand, Mathieu Ratthe does produce a few jumps that stand The Gracefield Incident above the pale. There are several scenes that get some outre jumps – the ever-so-spooky scene with Ratthe standing in the woods as a pair of alien claws come down around his shoulders from behind, he unaware of it; where Alexandre Nachi is sitting on the couch and an alien appears from behind and tips his head back; the scene where Ratthe and Victor Andres Trelles-Turgeon find themselves in the middle of a crop circle and come up with the idea of sending a cellphone up attached to balloons to see where they are only for the picture to keep pulling back and reveal they are in the midst of a vast labyrinth of patterns in the cornfield; the scene where Trelles-Turgeon and Laurence Dauphinais set off by bike to get help only for the others to see reflected in the rear window of the SUV as they are abruptly snatched up into the sky.

The latter half of the film delivers quite a reasonable workout during all the running around. The ending provides a genuine surprise that turns everything on its head. It is enough to make The Gracefield Incident stand out with some originality in the field of the Found Footage UFO film.